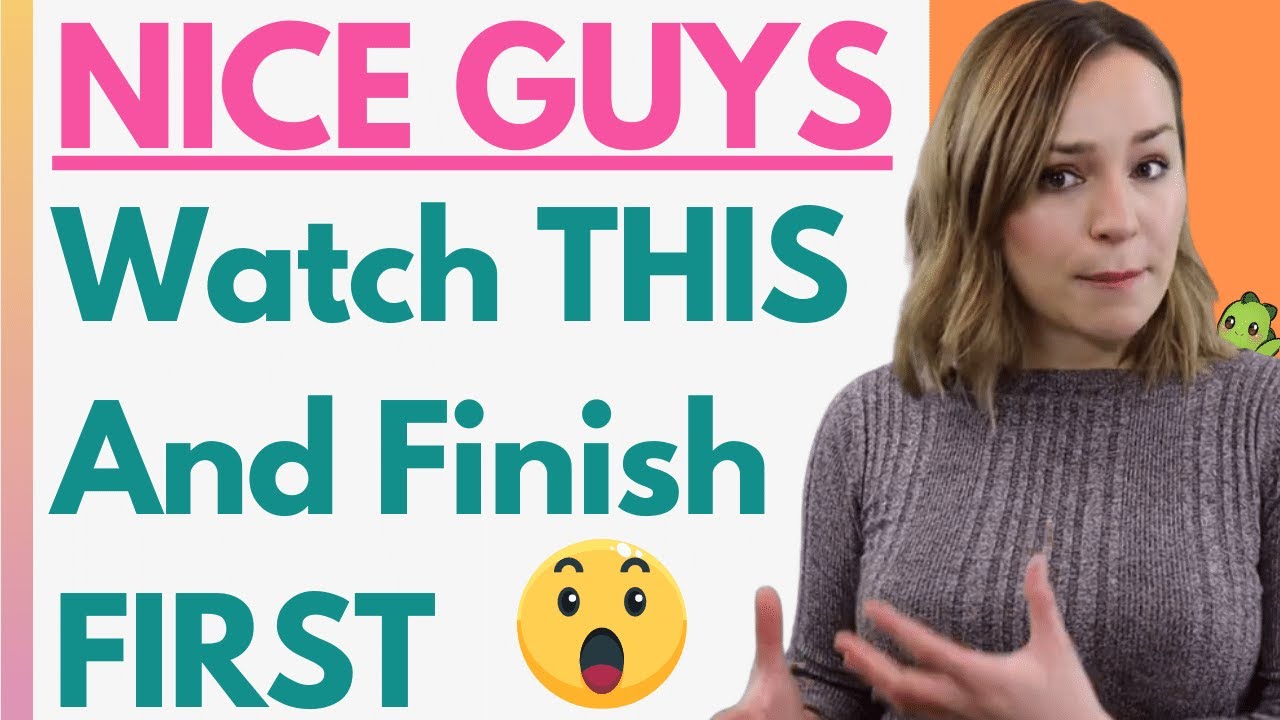 Do you consider yourself a nice guy? And have you heard the phrase “nice guys finish last? It wouldn’t surprise me if you’re on today’s video because you’ve found yourself saying yes to both those questions.

But nice guys don’t have to finish last. You simply need to know what it is within this nice guy behaviour that deters women from dating you. These little nice guy habits can easily kill attraction and wreck your chances of finding a loving relationship.

Nice guys don’t always finish last they can come out on top. To come out on top though you need to avoid the worst mistakes that nice guys make with women.

Women like nice guys but they also sometimes feel as though they are pretending to be nice to get what they want.

So today’s video is going to cover the 7 worst mistakes nice guys make with women.

Who are nice guys?

A nice guy is an informal term that is commonly used with either literal or sarcastic meanings.

As a literal term, a nice guy is a man who is agreeable, gentle, compassionate, sensitive and vulnerable.

When the word is used positively it relates to a guy who puts the needs of others above himself, looks after other people and is all around a kind, relatable person.

The other version of a nice guy is sometimes used sarcastically, especially in the world of dating. This is often a guy who calls himself a nice guy (hint here guys real nice guys often never mention it) and he uses his nice guy behaviour to manipulate the other person and get what he wants. Sometimes this relates to a relationship or a sexual relationship.

In this video, we are talking about the first type of nice guy. That gentle, compassionate, sensitive and vulnerable guy that women love.

Even genuine nice guys though can and do make mistakes with women and it’s important for you to learn what they are so that you never make them.

Complimenting the lady too much

It’s great that you are showing interest in a lady and that you are spotting all the great things about her. Complimenting someone selectively and when they are genuine compliments is a really nice thing to do. It’s not as effective though when you are constantly complimenting her. Now I know guys that I often tell you that a way to get a lady to like you is to compliment her and this is still true. The thing is, nice guys, tend to love to shower their lady in compliments but they can do it too often and then it seems as though he does not really mean the compliments. He is just saying them so that he can get his way or get what he wants. A lady hates this because she feels as though she is being used.

This can make her feel like, he just wants me for let’s say sex that’s it I am going to go and find someone else to spend my time with. Of course, you are just trying to be nice which is so kind of you but it is actually having the opposite effect. That’s why it is important to only compliment a woman when it is genuine and try to compliment her maybe once a day max. If you throw compliments her way she will be overwhelmed and alarm bells will start ringing. So pick one things a day that you love about the lady and compliment her on it that day. Then the next day picks something else.

A girl will either like you or she won’t because we are all attracted to different types of people. It’s not personal and you should never think less of yourself if this happens because it actually does happen to everyone in their lifetime. Something that is super unattractive and a huge mistake that nice guys can make is begging girls to like them. You see by begging a girl to like you, you are actually degrading yourself. She might simply not like you and unfortunately, you need to take this on the chin and deal with it. You cannot make her change her mind.

By walking away and saying hey it’s ok that you don’t like me, I can take a hint. You are still the nice girl and the bigger man. Not the desperate guy that begged a lady to like her, she will remember how you act so make sure to be the bigger man.

Always asking her if she is ok

Girls like being looked over but they hate being mothered. They like to be strong independent ladies. Of course, nice guys are caring and that is truly great but if you keep asking her if she is ok well she will explode.

If a girl is looking down or seems hurt, then please do ask her if she is ok. She will really appreciate it and will see you as a positive nice girl.

If she seems annoyed though or in her own thoughts and you keep asking her if she is ok she will find it really annoying. It makes you seem insecure or really nervous and not like the caring person you really are.

So keep asking a girl if she is ok to a minimum and only do it when she might really need it.

Only ever apologise if you have done something really wrong. Apologising all the time for things that are not really a big deal just takes up time and mental energy. Let me provide you with an example you are out with your girl and you forget to get her ketchup to go with her chips and you start saying, I am sorry, I am really sorry – you run back and get the ketchup only to then go back and apologise some more. You can see how this would annoy someone, it’s not that big a deal and the girl would not mind, she might even get up to get it herself.

If you apologise all the time it makes your apologies seem incenser which means it makes it seem like you don’t really mean it. So when you actually do something wrong that you should apologise for the girl will be thinking, does he really mean it?

Being a nice girl means that you are really polite which can make it hard for you to share your opinions. You might be worried about saying something wrong or taking the attention away from the other people involved in the conversation.

This is understandable and there is a fine line between dominating the conversation and being a part of it but if you are a nice guy, you will understand this line so don’t worry.

If you don’t share your opinions it makes you seem a little boring. Like you do not have much substance or anything to add to a conversation. It’s important that you share your opinion because if you win over the girl and enter into a relationship with her at some point you will need to tell her your opinions as this is a natural part of any relationship. What if when you do you both realise that you are on different pages about things or do not share opinions? I think you know the answer, it will ruin the relationship and you do not want this.

So make sure to speak up and share your opinions, you should not be worried because everyone is allowed to have their own opinions.

Trying to impress her with your knowledge

Nice guys are full of facts. They might be super smart and know a lot about philosophy or maybe they know a lot about gaming or travelling. Whatever it is, they often like sharing their knowledge with others, nice guys feel like it is selfish to keep everything they have learnt to themselves.

If nice guys overwhelm a lady with their knowledge though it comes across as big-headed and like they have a huge ego which they have to show off. Of course, this is not how you mean it to come across, it just happens. So only share some of your knowledge at first and share a little more along the way.

Nice guys can often be needy. They have a lot of love to give which makes them a great catch for ladies. Nice guys also like to have the same returned to them though which is what can make them needy.

Try to give a lady her independence and trust her, she will always come back to you and will like you even more.