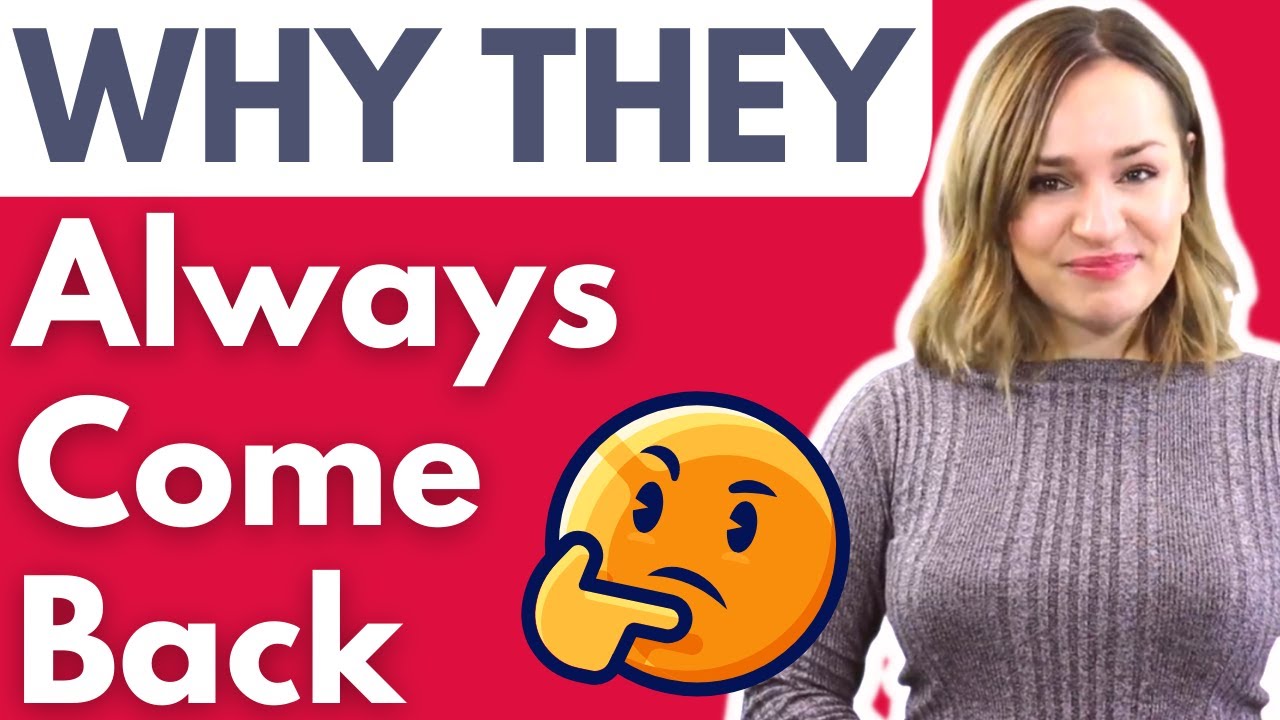 Sometimes you might give in when they ask for you back but other times you might find yourself feeling confused. This is an understandable feeling and you have probably been left with more questions than answers.

In today’s video I am going to tell you why they come back once you let them go. This should help answer some of the burning questions you have and mean that next time it happens (because let’s be honest, it will), you will understand why.

Why Do They Come Back Once You Let Them Go

They realize they made a mistake

This is the first point because it is probably the most likely reason. If you were the one to break up with them and they have come back to ask you to take them back, they might have realized that they made mistakes in the relationship.

Perhaps they got really lazy and stopped being romantic or they were mean to your friends. Whatever it was that made you want to break up with them, they have realized they were in the wrong.

On the flip slide if they broke up with you, they may have come to realize that they made a mistake. It can be awkward when an ex comes crawling back. But remember that it takes a lot of nerve for them to do it so be nice to them when they do.

Now that they have had space, you are more appealing

This happens more than you think. When you are in a relationship with someone, especially if you are living together, you can get sick of the person quickly.

After some time apart, you might become more appealing in their eyes. You might run into them in the supermarket and say hi. After that you go on with your day giving your chance meeting very little thought.

Your ex however will probably be thinking about how great you looked and how they forgot about your amazing sense of humor. Suddenly they will want to come back for more because you are more appealing to them.

You are now a challenge

It’s no easy feat winning someone back again. It takes work and commitment.

Some people love this challenge and will even break up with their partners just so they have a chance to win them back.

They no longer have control

Once you are broken up, they no longer have control over you.

Suddenly you go from living by their rules to living your own life. Spending time with your friends, excelling at work and dating other people.

For partners who have controlling tendencies this is something they don’t want. Even if you have broken up with them, they might come back because they want to have control over you again.

This is toxic behavior, and this type of partner is not trying to win you back for the right reasons.

They are jealous of you

If you have been in a difficult relationship often when you break up, you have what is called a glow up. You just start glowing and looking amazing without putting any effort in.

This is a post break up glow up and it can leave your ex feeling very jealous. They want to be in a relationship with this type of person and it might be the reason they come back for more.

Straight after your breakup they might have been excited to experience single life. Maybe last time they were single they had a really good time and a lot of fun. This time round though it is not as fun as the remember.

The friends they used to go out with are in relationships now, they have to use an app to find dates and the people they date, don’t compare to you.

Basically, single life sucks and they want to be back in the safe loving arms of a relationship.

Their inner hero is triggered

Everyone has an inner hero. That feeling that makes you want to save someone, help someone and be there for someone when they need you.

Break ups can be pretty tough and leave you feeling really upset. If they find out how hard you are taking it, their inner hero might be triggered. Suddenly they feel as though they need to come to your rescue and save you.

Although it might feel good in the moment that they want you back, it doesn’t mean they will stick around.

If you get back together, their inner hero might calm down. Then they might decide that they don’t actually want to be in a relationship. That means you have to go through two breakups.

They want to be the center of your attention

Once you are gone, they don’t have your attention anymore. They were once the center of your universe and now you are focusing on other things. You are still the center of their universe, and they want you back.

They have been reminiscing with friends

Sometimes an ex comes back straight away post break up. Other times it can be at a very random time, a few years after you have broken up.

This might be because they have been reminiscing with their friends about the time you spent together. It might have made them miss you or fall in love with you all over again.

Either way it’s always strange when an ex comes back after a long time away.

They have gone from spending all their time with an amazing person to spending a lot of time alone. Although some people are fine in their own company, others prefer to be around other people and they feel lonely when they are not.

If you do get back together, you risk them using you to find someone else who will keep them company.

Yep, it is harsh but true. Sometimes an ex comes back because they are bored.

Maybe they thought they would have more going on in their life than they do, and they think you are a great way to fill time. It’s not nice to hear but unfortunately this happens a lot.

You have stronger boundaries

In your eyes, once a relationship is done, it’s done. Your ex might not see it like this though. Maybe in the past they have been given a second chance before or they simply can’t go on without you.

While in your mind that door is closed because you have broken up. In their mind the door is ajar, and they want to give it another go. This shows that your boundaries are stronger than their boundaries are.

They want what they cannot have

You are not theirs anymore. Even if you are not dating anyone else just the thought of you dating someone is enough to drive them crazy.

They want you all to themselves and won’t stop trying until they win you back. It’s possible that because they cannot have you easily, it makes them want you more.

They see you through fresh eyes

Have you ever hated a job? And then you go on holiday and when you come back you think, this isn’t so bad. Even though before the holiday you told everyone you were going to quit, you have come to realize that it’s familiar and you like it.

If you have experienced anything like this, then it might be useful to know that the same thing can happen in relationships. Let’s face it, being in a relationship with someone is intense and it takes a lot of work. It can change the way you look at your partner and you can start only seeing negative things.

Your ex might come back with a fresh pair of eyes on. After a break, they might start to notice all the amazing things about you and wonder why your relationship ended at all.

Their feelings for you have been re-ignited due to taking a break and coming back with a fresh pair of eyes.

They start to worry it was their last chance

If you have broken up before and taken them back, they might worry that this time you won’t take them back.

If you have been the one that has gone back to them in the past but this time you have not, they will panic. This time they need to suck up their pride so that they don’t lose you.

The fright of losing you and it being their last chance might make them change and be really loving and caring towards you which could be a major plus.