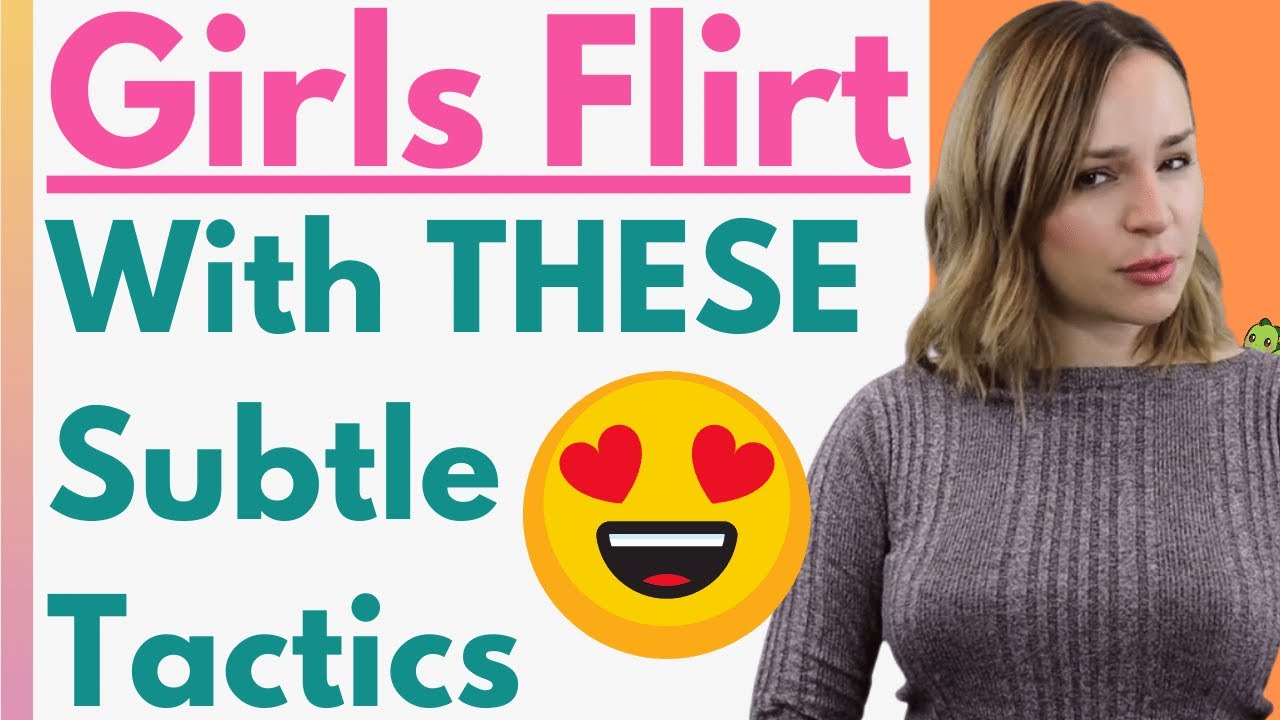 Flirting! In today’s video we’re going to be discussing the subtle signs a girl is flirting with you. We’ll be taking a look at some of the subtle flirting tactics women use.

Girls don’t always say what they mean, they often dance around things instead of just putting it all out there, all of their cards on the table. Which is why they often use subtle flirting techniques to grab a man’s attention instead of just telling him exactly how she feels. This makes it really hard for you guys to understand when a woman is flirting, or just being friendly.

It’s complicated and at this stage communication is not at the forefront of a lady’s mind. So it’s down to the gentlemen to understand which subtle flirting tactics to look out for. I can hear you thinking “how are we even supposed to know what these tactics are”. Well luckily, you have me. In today’s video I’m going to give you the art of subtle flirting tactics that girls use on the guys that they want.

Insulting someone, it sounds like a very strange way to flirt doesn’t it. You are not wrong it is which is why it is genius. If a girl is insulting you, you don’t immediately think she likes you. Now I don’t mean like a very offensive insult, more of a teasing type of insult. Like “there is no way you are better at that than me”. It’s like one of your girl friends who teases you. She is trying to form a bond with you that is based on humour so that you will ask her on a date.

Pretends to understand football or other interests

Girls normally pretend to understand a sport when they are interested in a guy. They think that if she knows enough about something you are interested in like football, you will find that super attractive. Which is not a wrong thing to think because a lot of guys find it attractive when girls have an interest in sports or in video games. We see it all the time in movies.

So next time a girl starts chatting to you about your favourite football team, think to yourself “is she really interested in football or is she flirting with me?”.

Start a fight with you over something silly

This is a risky subtle flirting tactic for any girl to do. Starting a fight could end up in you walking away from her and never talking to her again. Which is why it will always be a fun, playful argument. It could be that you mentioned you love Chelsea football team and she says that she is a Manchester United supporter. She might then get into a flirty argument with you about why Man United are so much better. It’s more of a fun, lively conversation as opposed to a fight but it can still get you a little wound up inside. This subtle flirting tactic does not always work

Drink something she hates just to impress you

Girls do this all the time and you might not even realise they are doing it. You ask your date if she would like a drink and she says I’ll have whatever you are having. So you order her a beer and she drinks it but very slowly. Later on in the night you ask her if she would like a whisky and again she says yes. At this point you might be thinking “wow we like to drink the exact same things”. Even though she hates both beer and whisky she said yes because she wants to impress you! Of course if you were to go on more dates, you would quickly realise that she does not like those drinks.

Ask for help when they actually don’t need it

Has a girl ever said “I have a problem at work, I wonder if you can help me”. She tells you the problem and you offer her a solution, she says thank you and you feel great because you helped her out. The truth is she probably did not need your help.

Girls are very good at solving problems in their heads quickly but she wants you to think that you have helped her. It helps to build a connection between you both and that is what she wants. Plus she probably finds it super attractive when you solve her problems.

Ask you to take shots with her

You are in a bar on a date with her and she asks you to do shots. It makes her look fun and exciting. She probably hates doing shots but she wants to get you both a little drunk so you can both flirt some more.

Laugh at everything you say

Girls love funny guys and most men know this. So if she wants to subtly flirt with you then she will laugh at everything you say. Even if you crack a dad joke, she will laugh. She wants you to know how funny she thinks you are.

This is another subtle flirting tactic which does not always hit the mark. Girls might talk to you about how they are so sick of being hit on all the time by other guys. They basically want you to know that a lot of other guys are interested in them and they have chosen to speak to you.

Talk about movies they know you love

They would need to know you a little before they could use this subtle flirting tactic. If they talk about movies they love on your first date then they probably really do share them. If you both know each other well then they have probably done their research and want to strike up a conversation that you can both enjoy. It’s a good way to get you talking about something you love.

Send you memes on social media

Memes are like our modern-day love letters. If a girl that you are dating or talking to starts to send you memes on social media she is trying to flirt, form a connection and grab your attention. She will love it when you reply to them.

She texts you cute pictures

From pictures of cute cats to nice pictures of her, she sends you cute pictures to show you what she is up to and to grab your attention. She wants to speak to you as often as possible because she really likes you.

She messages you late at night

Sure she messages you during the day but when a girl texts you at night, she is hoping that things will get a little more flirty. She wants you to turn up the heat a little and show her that you are interested in her as well. If you notice that she is subtly flirting, do her a favour and flirt back. Then she will know that you feel the same way and she is not wasting her time.

She complains about being single

She says things like “I wish I had a man to do this with” or “I don’t think I am made to be single”. She wants you to know that she is ready to go a step further with you whether that is dating or a relationship. If you feel the same way then watch out for this tactic and take the hint.