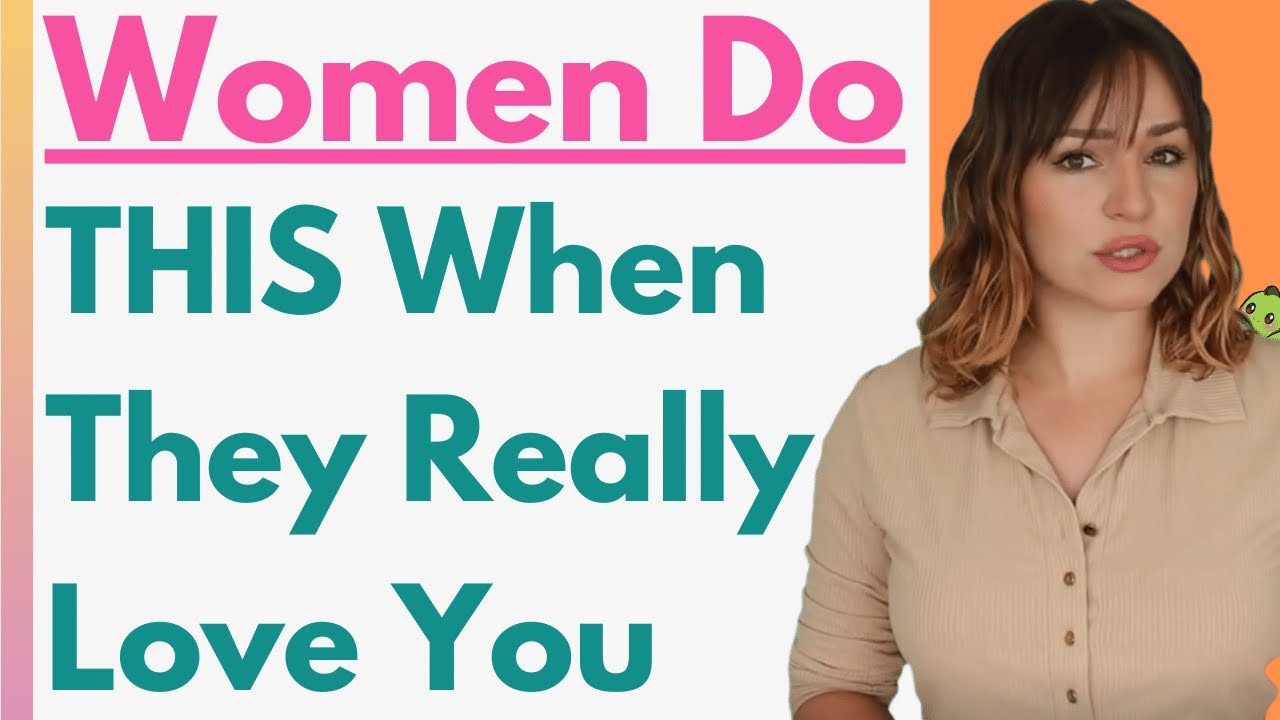 Learn about the 20 things women do when they genuinely love you.

Luckily for you in today’s video we’re tackling this subject head on! Women are driven by their emotions yet sometimes they hide them to also protect themselves. This can make it well, very hard for you to tell if they actually like you let alone love you.

They might be acting one way and saying something completely different to you. You might actually find yourself feeling like am I going crazy, and the truth is you are not women are just very complicated when it comes to love, and I apologize!

Signs she loves you deeply

You guys have been dating for a while

It’s been a few months and you are still dating each other. Regular texts, romantic dates and a lot of flirting, it’s a fun stage to be in. It is full of anticipation and ‘what ifs’ because you are not quite sure how long it will last.

If you have been dating for longer than 6 months then there’s a good chance that she loves you and is maybe waiting on you to progress it further.

She wants to meet your family

If you mention Sunday dinner with your family and she does not immediately shut down the idea, she is ready for more.

Meeting someone’s family is a huge step and it makes the relationship more official. A lady will only meet your family when she is ready to commit to you.

She confides in you

We only confide in people we trust and that we believe will be in our lives long-term. We don’t open ourselves up to strangers because we do not trust them.

If she is opening herself up to you then make sure you listen up, it’s a sign that she loves you.

She wants to spend time with you instead of with friends

Have you ever asked a girl on a date and she has said “oh I had plans with my friends that night but I can rearrange”?

Women will only rearrange plans with friends when they truly believe that the man is worth it.

If she does this and makes you aware that she is cancelling plans with her friends, she is serious about you.

She stops being perfect

At the beginning of a relationship, women attempt to be perfect.

Sure, men put their best foot forward and try to be the best version of themselves but for women it is so much more intense.

They have to be perfect because that is what they think men want. Once they realise they love you, they start to stop being perfect all the time.

They let more of their quirks show because they want to make sure that you love them for who they are.

She is only dating you

If she makes it clear that she is only dating you and no other men then it’s obvious that she wants to take things a step further.

She wants to be your girlfriend and eventually she will tell you that she loves you.

She talks about her future and you are in it

It could be a holiday that she is planning for in a few months’ time or a wedding that she has to go to next year.

If she is talking about events in the future and includes you in them then she sees you in her future and would love you to be there.

Women will only ever include you in their future if they generally see you in it.

She wants you to meet her family

Her mum and dad could be coming to town, or she might be going home for the weekend and ask you casually if you would like to join.

This is a sure sign that she is invested in your relationship and loves you. She would not just introduce any man to her family.

She talks to you about everything

It’s no longer only small talk, she has deep conversations with you. She talks about anything and everything which helps you both get to know each other better.

She loves you even with your faults

You have your faults, who doesn’t? You might have opened up to her and told her about them. Or she might have seen them through spending so much time with you.

She’s stuck around though and has not run away! This is because she genuinely loves you for who you are.

She remembers things that are important to you

Taking note of important things that someone mentions and repeating them back to them at a later date is a classic dating technique. It is also a thing that we all do when someone is important to us.

If she remembers something that is important to you, it is because she really cares and she wants you to know that she does.

Her friends consider you a couple

If you are at the stage of meeting her friends then you can safely assume that it is serious.

If they start referring to you as a couple this is most likely because she has mentioned it.

They might casually say something like “you’ll be coming together”. Hinting that you are a couple. Take it as them giving you their blessing as well.

She doesn’t just demand everything that she wants.

For example, you are getting a takeaway for dinner and she decides that she would like Mexican but you would like Chinese. She says it’s ok, let’s get Chinese this time and next time we can get Mexican. That is her being with you because she loves you and wants it to be an equal relationship.

You are her priority

She puts you above anyone or anything else.

Obviously our friends and family are important to us but once we find someone who is really special to us then they become our number one priority.

She wants to spend the rest of her life with you because she loves you which means that she puts you first and if something comes up with you, she drops everything to be there.

You become part of her family traditions

Do you have any unique family traditions? Maybe your family is Halloween mad. It’s the time of the year that brings you all together and it’s very special to you all.

Every family has some type of tradition and if she makes you a part of her family traditions then it’s because she views you as a member of her family.

It’s important to her that you are included and she definitely genuinely loves you.

She starts using ‘we’

The magical ‘we’. It’s something you have probably longed to hear and when it finally happens it is magical!

You don’t have to do all the work, she makes the plans as well. She organises dates or outings with a group of friends. She also includes you in plans that she already has.

This is her starting to build a life for you both because she loves you.

She gives you gifts

She is not buying you gifts for the sake of it, she is doing it to show you how much you mean to her.

It’s her way of showing you that she loves you. It could be because this is her love language. You can take a test to figure out what your love language is and I would recommend you do so.

Especially if you are just starting out in a relationship, it can help you both understand each other better.

She tells you she misses you

It’s been a few days since you have both seen each other and she messages you and lets you know that she misses you. She genuinely means it and it’s because she loves you.

When we love someone we want to be with them all the time and see them whenever we can.

We get addicted to other people and want more and more of them. Have you ever felt like this?

If she is telling you that she misses you, it’s because she loves you.

She says the magic words, I love you!

Finally, number 20, she says the three magic words to you…I love you! A lady will only say this when she really means it guys.

So if she says it to you, it’s because she really does love you.