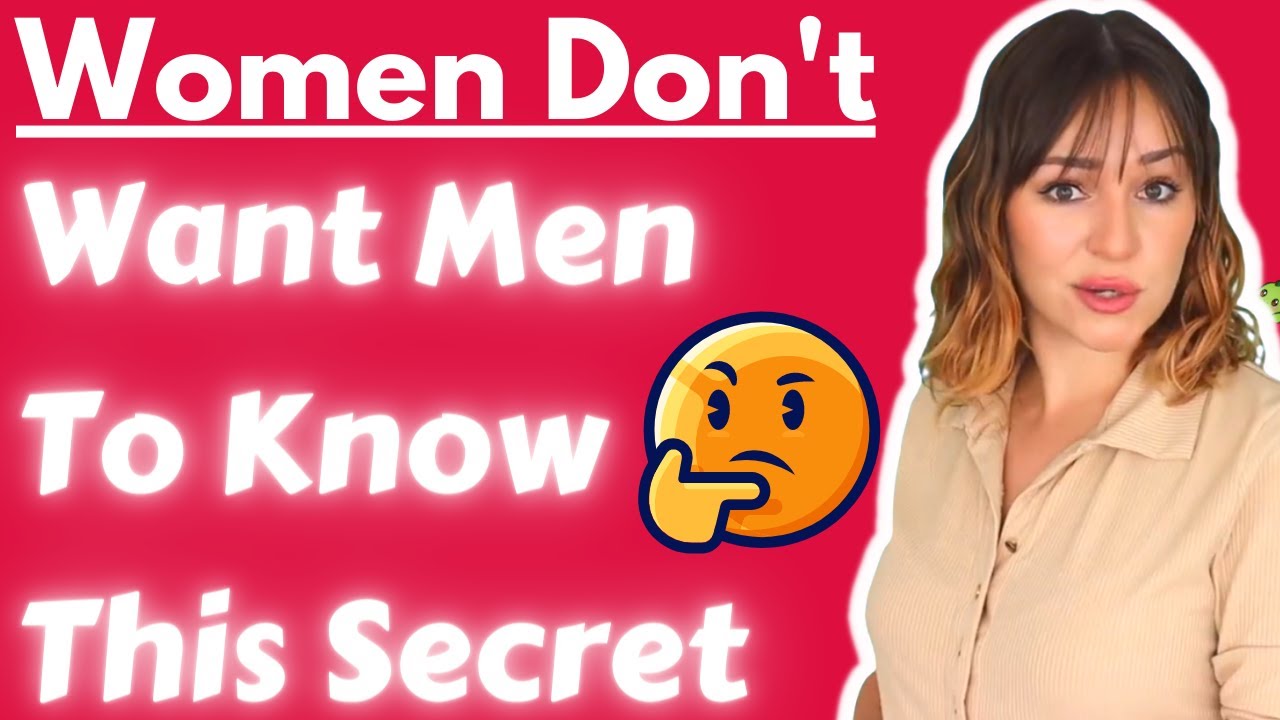 Women are often open about themselves which can make you think that they have no secrets. Surprisingly however, women tend to hold more secrets than men and there are a lot of things they don’t want men to know about them.

From how much their shopping really costs to how often they stalk your social media. These secrets might make you less nervous around women because well, you got to know them a little bit better.

In today’s video I’m going to reveal 11 of the secret’s women have been holding in. So, are you ready for me to reveal all?

Have you ever been shopping with a girl and she looks at a pair of shoes and then points at the most uncomfortable looking pair and say’s “I want those.”

You explain to her that you think they would really hurt and not be comfortable at all. She tries them on and tells you they are so comfortable just like her trainers!

Your mind puzzles, how can they be that comfortable? They look like you would be walking on a piece of glass. But you haven’t tried them on so what do you know?

A few months later, she wears them out to dinner with you. You notice her hobbling and looking as if she is in pain and so you ask, “are your shoes hurting you?” and she still says no.

Guys often wonder if girls’ shoes do hurt because they say no so often. Well, I am here to let you in on a little secret, yes they do hurt and no we don’t want to admit it.

By admitting it we think it makes us less feminine and we like the way we look when we wear them.

So, if you see a girl struggling, take her hand and help her walk but don’t ask her if they hurt because you already know, they do!

The cost of things

This is a classic secret that women keep. It’s normally something that would apply if you had a girlfriend or wife. She goes shopping with her friends and comes back with lots of bags.

She might even hide some of the things before you get home so that you don’t notice. When you ask her the cost of something as she is showing you, she will either tell you it is on sale or tell you an incorrect price.

Now the truth is, you probably don’t care how much it costs. It’s her money, she can spend what she wants.

She might even know this to be true, but she will still find a way of making it appear as though she spent less by telling you so.

This is just something that women do mostly because men hardly ever spend as much as a woman and they don’t understand.

Don’t try and interrogate her on how much she really spends because you will come across as controlling.

Instead, just let her have her moment but in the back of your mind be aware that it probably cost more than she is letting on.

No matter how much she denies it, she has and probably still does stalk your social media. At the start of any relationship, even just dating a girl will stalk a guy’s profile.

This is so she can see if you have any other girls on the go or just her. Once you are in a relationship, the stalking won’t stop. She will still stalk you to see who is following you and who you are following.

She will also check comments and what you are liking. This is less because she is controlling and more because she just does not want to get hurt.

If you kindly offer to clean something for her, she will clean it again. This is not because you haven’t done a decent job, it’s just because she believes that she can do a better one.

Women have a very particular way of doing things and it can be frustrating for men to see this.

She does not mean to offend you though, she simply wants to make sure the space you are both in is as nice as possible.

So, try not to get offended if she tells you, you have done a fantastic job and then cleans up behind you.

I am not sure this one is the best kept secret but just like men, girls have body hair.

They are not perfectly hairless all the time although they will often shave before they are going to see you. Which can create an impression they are hairless.

It’s not that they don’t want to tell you this, to be honest most girls would assume guys already know, but she would rather keep up the appearance if she thinks that is what you are attracted to.

If you thought she was doing this, you could talk to her about it and tell her your preferences so that you are both on the same page.

There is a rumor that girls take ages to get ready.

The time depends on how many steps a girl has to go through and what the event is that she is getting ready for.

For example, you could be going on a date night which means she wants to put in more effort. If you were going for a walk in the park though, this would take less effort.

Girls go through steps when they get ready and once you know what they are you might appreciate why it all takes so long.

First, they need to shower. Wash their hair, shave and wash their face. Then they might need to fake tan and wait for it to dry.

They then need to dry their hair, paint their toenails and fingernails, put on their makeup (which has its own list of steps), then style their hair, try on some outfits, try on some shoes, put on perfume, brush their teeth and find a coat and bag.

You can see why this takes such a long time. So next time you are rushing your lady, think back to all the steps she has to go through so that she can look nice for you and let her be.

Be prepared for the wait by finding something to do like playing video games.

Even if a girl tells you that she does not tell her friends everything or that she will keep what you have just told her a secret, she won’t.

Girls tell their friends everything. They don’t always mean to, but it does just happen, it seems to slip out! Girls meet up for lunch and dinner and they just gossip.

They spend their whole time talking to each other about who they are dating or who they are in a relationship with.

They might ask them for advice or just be talking about how great you are. Either way don’t tell her anything you really wouldn’t want her friends to know.

Changing men to be how they want them to be

It happens slowly over time and a man hardly ever notices that it has happened.

A girl will slowly change his behavior patterns by telling him not to do something like leave his clothes on the floor.

After a while, a man will learn not to leave clothes on the floor and will stop. They do these types of micro-changes repeatedly.

Eventually a girl has moulded the guy to be who she wants, and the man does not even realize.

She might tell you that she is keeping things casual and thinking long term, but the truth is, she is not.

Girls always think long term, they can’t help it. They naturally do this because they want their happily ever after.

Even if you have only been dating for a few weeks they will be thinking about when they can introduce you to some friends or her family.

She will also think about what it would be like if you had children and if you were married. It sounds intense but it’s just how women think. She would never admit this, it’s top secret.

This secret mainly applies to if you are newly dating a girl.

She might be wearing sexy underwear every time you see her, and you might be thinking ‘wow.’

The truth is, she most likely does not wear underwear like this every day, she is doing it to impress you. She probably wears comfortable underwear when she is not with you.

If things get more serious, you will find this out.

Girls might not admit this secret, but they are always afraid of losing men that they are in a relationship with.

All they want to do is impress you and get you to fall in love with them. They are constantly worried they are not good enough for you or that you will get bored.

Remember to reassure them as often as possible that you are not going anywhere.