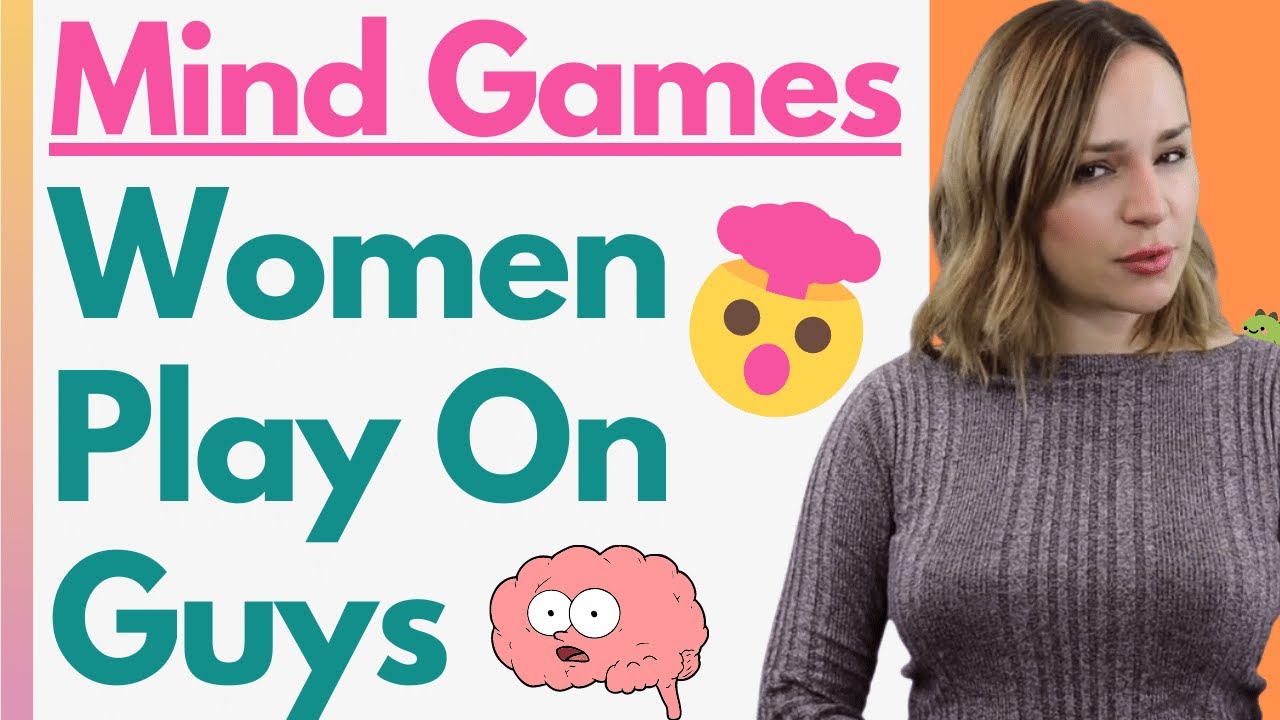 In today’s video, we’re going to be learning about and discussing 17 surprising psychological mind games women play on guys.

As discussed, these can be used to actually make a relationship work, make you chase women and as a way women test men.

Physiological mind games that woman use on guys

However some of these mind games actually make the relationship work much better.

I get it, crazy some games make you chase ladies harder and make you commit to a relationship.

An example of a bad mind game is gaslighting, guilt tripping and shaming.

If a girl ever does these things, you need to leave her very quickly.

In today’s videos, however, we are diving deep into the female psychology of mind games that women play.

My name is Anna and stay tuned.

She replies to you much later

If this is genuine and she’s busy then you can’t scold her for it. It’s okay but for the majority of the time if it takes her ages to message you back, yet you’ve seen that she’s been online, she’s making you wait to claim the power back.

She wants you to question what your intentions are about her. To kind of make you guys become closer.

A woman really has to qualify a guy before she dates him. She wants to make sure he isn’t aggressive, rude, selfish or immature.

By acting like she’s not interested in you, it gives her more time to figure you out.

It also lets her know how interested you are of course.

A lot of women try to avoid the players with this maneuver, a guy that is only interested in a fling and a one night stand will not pursue her at the first hurdle.

Meaning that the guy who sticks around is proven to be worth her time so this type of mind game doesn’t mean she’s acting completely disinterested. She just plays a little bit hard to get.

She turns down the first date

However she doesn’t jump at the chance to go on a date with you.

She kind of lingers around and delays it a little bit.

Just to see how desperate you are to make things work out.

Believe it or not a lady will turn down your first date by saying she thinks she’s busy or she doesn’t really like that idea of the date.

She wants you to try harder to see if you will give up quickly or if you persist. Proving that you genuinely do like her.

She turns up late

The vast difference between playing a mind game and being genuinely late is the apology.

If she lets you know she is running late and apologizes, brilliant!

She’s conscious of your time and she is genuinely sorry however if you have to get in touch after 10 minutes of lateness and then she replies, i’m really sorry, i’m going to be late, it’s bad character on her behalf.

It shows she’s playing a game and she doesn’t really care about your feelings.

Woman will play on how helpless she is and needs you to fulfill a request because she is not apparently capable of doing it herself.

She wants you to feel very powerful in many ways, protect her and looking after her.

Now this game is one performed by the high quality ladies, you may notice she asks you for advice or to do something for them that eventually you see them doing for themselves.

Which is when you realize, she has been playing a mind game to make you feel good about helping her.

If you’ve dated someone before you will know this game too well.

I’m guilty of this one she’s visibly annoyed at you, she seems obsessed with her phone and when you ask if she’s okay she tells you fine, I’m okay, I’m not angry, I’m fine however she’s getting more and more annoyed at you for not realizing what you did wrong.

Now to her, it’s obvious and she feels more annoyed that she has to tell you, what you did wrong. She is ignoring you for you to realize the mistake on your own accord.

Getting you to commit games

The overall idea here is making you commit to her otherwise your requests and ideals will fall on deaf ears.

For example, if you ask her jokingly, “why don’t you ever look after me when I’m sick like this girl on tvs doing”. Der reply could be well because you aren’t my boyfriend or my husband duh. You don’t get that privilege until you commit.

This means she is highlighting that she wants more from you.

She’s playing with the idea of basically saying boy buckle up and commit to me otherwise I’m a goner!

She gives you the decision

“Babe my ex is coming back to town for a couple of days and she’s asked if you want to hang out. Should I go or maybe not?”

“I know it’s our anniversary this weekend, but the lads have asked if I can go to this really cool sporting event, what should I do should I go?”

If her reply is do whatever you want play your next move with caution.

She doesn’t want to directly tell you no in case she comes across as a naggy girlfriend or a wife. She wants you to decide for yourself and understand it’s a bad idea.

If you do go out and do that thing anyway she will use it against you in the future.

Sadly she doesn’t give you the green light because she’s testing to see where your head and your heart is at.

If you really do respect and value her and for the record never say yes to any of those two things I just mentioned.

She cancels the date

Women like to cancel a date to dishearten you. To bid on your affection more especially. If she cancels on the day of the date, if she tells you in advance and is profusely apologetic and she wants to make up for the cancellation by asking to reschedule these are all genuine responses to something unstoppable that came up.

We get it life happens but if she doesn’t give you any of that she’s playing a mind game.

She wants to see you hurt about the cancellation to claim that power and make you chase her more.

She ignores you or gives you very short answers or even short text messages or messages with no kisses. She wants you to comfort her but to really put in the effort first.

She’s testing you by shutting down and switching off and waiting to see if you can figure out what has happened and make up for it.

This is usually a case where she is feeling emotionally hurt and closed off from you because you disregarded her feelings in some way.

So she will patiently wait for you to notice and see if you notice what you did wrong and hope that you apologize and explain yourself.

One minute she’s really flirty and you feel that things are going so well and then she acts cold, distanced and you’re just like what is going on? I’m so confused!

She will stop the initiating, the calling and she will give you a lot less value. Now she does this to make you fall for her harder. To keep committing to her and to realize that she’s being distant. You need to up your game and love her more.

Flirting with other guys

If you see that she is flirting with your friends or strangers directly in front of you, take caution. She wants you to know that she’s a catch and that if you don’t step up your game, she could potentially date someone else.

Obviously, this is a very bad thing to do and very toxic. Her reasoning could be to hurt you just a little bit. So that you come running back to her, proclaim your feelings and you try harder to make her feel loved.

Now you may notice that she could be flirting with other people on social media. She directly points to her phone because she wants you to see that comment that the other guy left on her selfie.

For proof that she is a catch because she wants you to react.

Holding back on sex

Some women will make you jump through many hoops before the sex game actually happens. She wants you to actually give it up first before she rewards you with sex.

The concept here is to not, give it all up too soon for unworthy behaviour.

Women are conscious that guys expect sex to happen after a certain amount of time. They won’t want to just give it up so they delay seeing how you respond.

If you have mentioned that you guys haven’t had sex. She may leave you on read because you’ve just revealed yourself as a desperate or new player.

However, if you don’t make any attempt to pursue her and just let her make the moves to initiate. It shows you respect her.

You have won her consent.

If a girl isn’t sure how you feel or just wants to test you to see how you respond in the face of jealousy. Well, she’s going to play this game.

She will casually do this but be fully aware of your feelings at the same time.

Maybe she will name drop the name of another guy into a sentence. Then she might make you question who he is and what he means to her.

Perhaps she might bring up a new guy that she’s working with at work. Quite often so much that it bugs you and you ask –

“Babe does he fancy you and is he handsome”.

Looking at the way your eyes meet

At the very start of a relationship, a woman has already started these mind games. Sadly she will begin by attracting your attention and then purposely looking away to keep you guessing.

Now the idea behind this is she doesn’t actually want you to know that she’s looking at you. She kind of wants it to look very much like the movies.

That you notice her first because she wants to keep the power.

Show me your commitment

A woman that is testing a guy’s commitment level is doing so to make sure that he is a catch.

Well if you fail this game she could either be acting very cold and distant. Or she may start another game or she may just leave you.

She will expect you to pay for the dates, to buy her gifts and to run to her side. To support her emotionally if you don’t do that things are a no-go.

Are you really that good game?

Women think long term, we can’t help it! When it comes to relationships, our brains are programmed from that cave lady era.

We can’t help but always try to select the best guy to procreate with. It’s just in our DNA so keeping this in mind helps you understand this actual mind game.

She is going to try to squeeze more information out of you. To find out how great you are at something.

She will play this very subtly as well.

For example, she may suggest that you cook something for the very first date at your apartment. It sounds natural and fun however she’s actually testing you to see how self-sufficient you are at cooking.

To make sure that you are most definitely a good catch.

WOW!We made it to the end of the video.

Have an amazing day and see you next time!