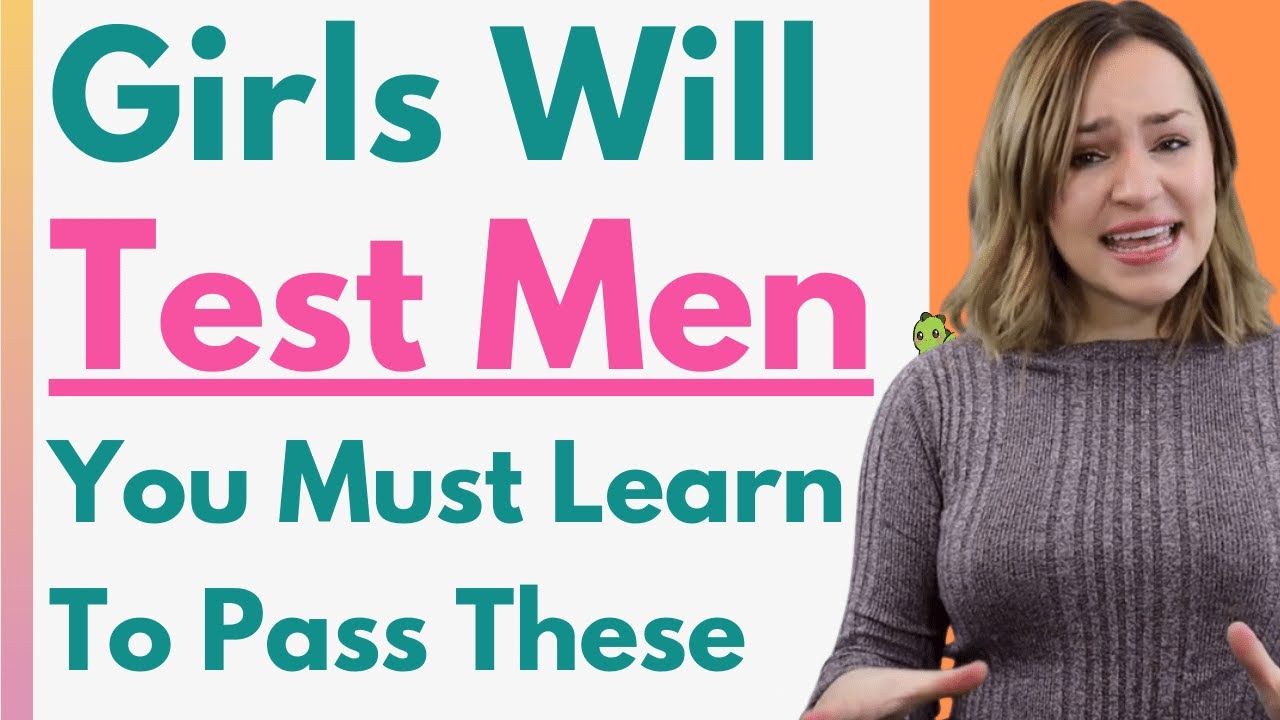 Finally, you have a lady right where you want her. You’ve put in a lot of effort and hard work to get her to date you. Now the dates have been romantic, fun and it really looks like she’s super into you. But then all of a sudden she starts to test you, putting you in strange situations and asking you pointed questions. It’s kind of like you’re back at school again sitting a biology test. Now this is not something that always happens, but sometimes the ladies do test men that they are dating or even in a relationship with. In today’s video we’re going to look at how and why women test men, so that you can understand the reasoning behind this crazy mind game.

There are 9 main ways that women test men. From the verbal challenge to the more difficult details test, it’s not easy to be on the receiving ends of these tests. Just like you would study for a test at school, it’s time to get your pen and paper ready for some hard-core cramming.

This one could also be called teasing. It’s when a girl says something negative about you or lightly puts you down but in a fun or light-hearted way. She might start testing you like this after your first date, it is something women normally do early on in the relationship to see what kind of sense of humour you have. She will most likely say “is that the best you can do?” or “you’re not my normal type?”. These can cut deep at the time, but she does not mean them in a cruel way. She is studying your response to see what you do.

You should stay cool and laugh along with her. You could even say something back like “it’s better than you could ever do” so that she knows you are not a pushover. Don’t say anything mean or hurtful back though.

Women don’t like men that control them or get jealous too easily. Sure they want you to be protective over them but they don’t want you to tell them who to see. Which is why early on into the relationship they will perform what is called the jealousy test. This is when a girl will flirt with a guy in front of you so that she can see your reaction, or she might mention one of her guy friends to you.

If she flirts with a guy in front of you, she is really testing you! She doesn’t want you to not react at all, after all she wants to know that you like her enough to want to protect her. She also does not want you to start acting jealous. It’s a confusing, careful balance. So how do you pass? Well, you should smile while they are talking, laugh a little and join in with the conversation. When the guy finally leaves, you could say to her “he was nice, how do you know him?” and she could say that she knows him through a friend or that she does not know him at all. Then you could make a joke and say “were you trying to make you jealous? Because it worked”. This isn’t you being controlling or jealous, it’s you joking about being jealous and flirting a little with her. She will be super impressed with how you handled the test.

If she mentions a guy friend and says that she is hanging out with him, then you should reply by asking her what they will be doing and that it sounds fun. Lots of girls have guy friends and they want to make sure they will still be able to date them if they get into a relationship with you.

Do you think you could help me move house? I need a hand putting together a bookshelf, do you have time? I would love a coffee, could you please get me one? These are all favours that woman could throw at you as a test. They are testing you so they can see how committed you are to them. If you were to say no then they would figure that you are not very interested in them and that you don’t want anything more. In their minds, at least they know this now. If you say yes though, they will really understand how you feel about them. I mean we only do favours for people we really care about right!

Is she never available for dates and acts like she is not interested in you? This could be her playing the hard-to-get test. This test might make you think that she doesn’t like you and you might be ready to give up and move on. You should hold on for a little longer though. If you think she might be playing hard to get then you just need to communicate with her. Tell her that you really like her and you would like to go on a date with her. She will be impressed that you have not just walked away and will agree to a date. After that you might notice that she seems a lot more interested in you and even texts you first sometimes. That means you have passed the test.

The asking about your past test

Women get really suspicious when guys avoid talking about their past. They think they must be hiding something or that they still have feelings for a past girlfriend. It is normally a make-or-break test for ladies who are often open books about their past. She will probably start by asking some random questions like where you went to primary school? And will end up asking about your past girlfriends. She doesn’t really want to hear about your past girlfriends, she just wants to know that you will talk about them and that you are not hiding anything.

If you simply hate talking about the past, you can explain this to her but she still might not be convinced. The easy way to pass this test is to trust her and open up.

If you have reached the point where a girl is introducing you to her friends and family, it means she is very serious about you. She really likes you and sees a future with you. However she needs to see how you will behave in front of the people who mean the most to her.

The first test is simply her asking if you want to meet them and you saying yes.

The third test is acting in the right way around them. She wants you to be friendly and respectful in the way you act. Obviously she wants them to like you so make sure to ask them questions about themselves, listen to what they have to say and act interested.

You could be out shopping and they will say something like “when is my birthday?”. It might take you by surprise but they expect you to know the answer. They want to know if you are paying attention to them when they are speaking. We are all more likely to remember important details about the people we love so she is basically checking in on your feelings.

To pass this test, you need to pay attention!

This is not a common test that women do as it can go badly wrong, but it is something some women do so is worth mentioning. You have arranged a date and 30 minutes beforehand she messages you and says “sorry I can’t make it, something has come up” or even worse, she just doesn’t show up. It can be really hurtful and disappointing. You might even question if you want to be with her anymore. She is of course testing your reaction.

If you message her and say ‘I’m done’ then she is going to question whether you really liked her at all.

If you say that it’s ok and ask why she missed the date then she will think ‘wow, he has stuck around’ and from that point forward will put more effort into your relationship.

A word of warning here though, if she continues to be flaky, then she isn’t that into you and it’s time to move on.

Girls want a guy that is going to look after them and take care of them. This doesn’t necessarily mean they want a guy with heaps of money and a fast car. They just want someone that will give them the best life possible. This normally means they want a guy with a great personality and has similar values and morals to them.

If you want to pass this test, just be yourself. She will see for herself if you have potential in her eyes and if you don’t, move on! You will both find someone you are more suited to.

Quite simply, women test men because they want to see if they will stick around. They may have been hurt by men in the past and this is their way of protecting themselves from it happening again.