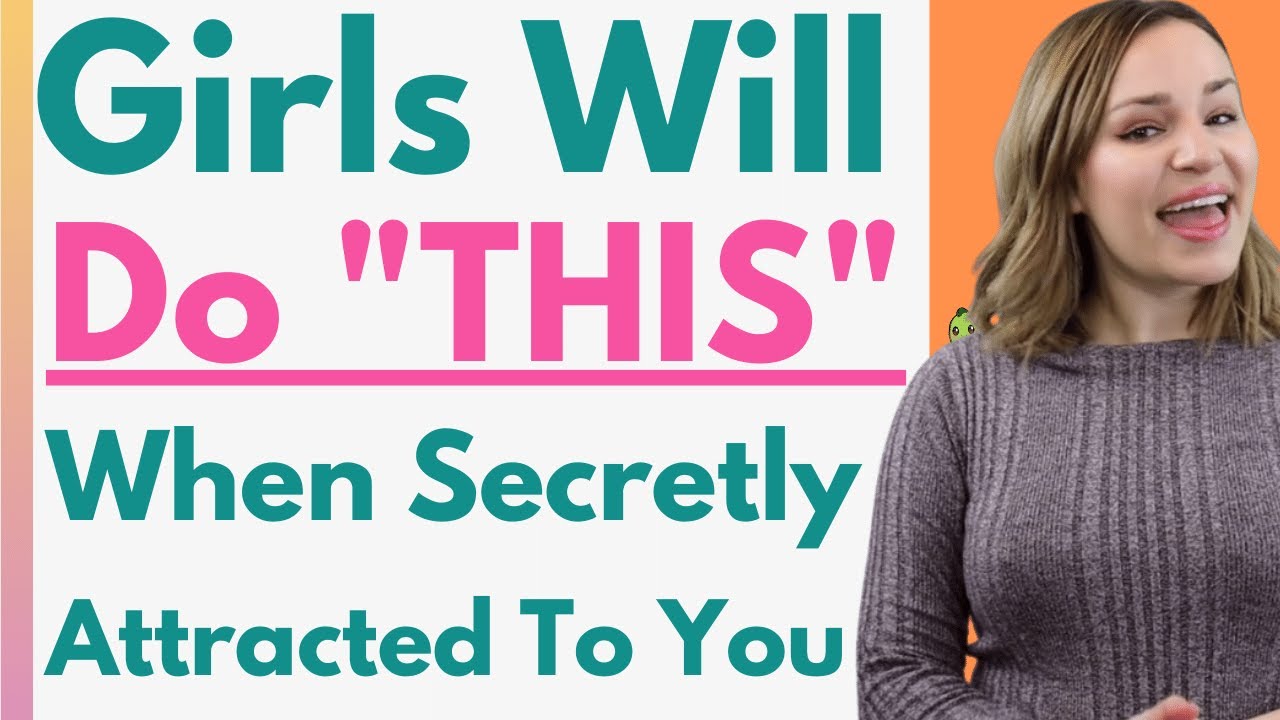 Learn how to tell if a girl is secretly attracted to you. In today’s video we’re going to discuss the signs she is secretly attracted to you. If a girl likes you and is trying to hide it and isn’t ready for you to find out just yet she may actually start to give out subtle signs of attraction without even realising it. We’re going to take a look at some of these psychological and body language signs that you can spot if you look hard enough.

We all have secrets that we keep hidden. From embarrassing things that have happened to us to a hobby that we have that no one really knows about. Now it’s natural for us to keep something secret to protect ourselves as we all feel pretty vulnerable sometimes. And secrets also happen in dating. A girl might like you but she’s too shy or vulnerable to tell you. Now there are certain things though that girls do when they are secretly attracted to you. In today’s video I’m going to teach you all about those signs to look out for so that you can be sure when you approach a girl if she’s attracted to you or not.

Signs she is secretly attracted to you

They respond quickly to the sound of your voice

This is something we do instinctively when we hear the voice of a family member or someone we like. You could be walking down the street and if she is as well, she will pick up your voice and look around for you. The same goes for if she hears you at a restaurant or at a bar. She won’t even realise that she is doing it, it is something that she does completely instinctively.

What it shows you though, if you notice it is that she is secretly attracted to you. She might know that she likes you or she might not be aware yet, but her body knows. If you spot her looking around as soon as you speak or slightly jumping when she hears you, it might be a good time to go over and chat to her.

They tell you personal details about themselves

It might seem like she is oversharing her thoughts and feelings. Sure some people are like this but if a girl is telling you personal information about them, they are attracted to you. Ladies are actually very private and don’t tell men everything about themselves. Not because they want to be mysterious but just because they hold things back.

If you are for example out at a bar and you get chatting to a girl, after the small talk passes she starts telling you about her job and her passions. Well this is a great sign, it means she has become immediately attracted to you and is ready to tell you a little bit about herself.

They play hard to get

You are attracted to her and are putting in a lot of work to attract her but she just isn’t giving you anything back. You might be thinking “she isn’t interested in me at all”.  What if she was attracted to you? But she was just playing hard to get.

They have their legs uncrossed

They are subconsciously showing you that they want to get to know you and are putting down their walls. We all have barriers that we put up around others but when we are around someone that we like, these slowly come down. This is one of the things girls do when they are secretly attracted to you.

They tell you that they are single

Surprisingly girls do not really like telling others they are single. In fact, girls will sometimes wear a wedding ring even though they are not married just to make it look like they are taken. I am sure you think that is super strange but really it is so they don’t always get approached by men. If a girl you are talking to casually drops it into conversation that she is single, she really wants you to know. She has told you because she is attracted to you and is ready for you to make your move.

When a girl has a boy who is her friend, she might tease him sometimes but more in a friend way or like a sister and brother would do. If she is attracted to you then the teasing will be more flirty. She might somehow make it a little sexual or use it as an excuse to touch you. She might say “I am way better at you than that” and then touch your shoulder or leg as she laughs. This is a very strong sign that she is attracted to you. Really at this point, you have the power in your hands, if you like her you can make your move and if not, you can back off gently.

They fiddle with objects they have nearby

Girls get extremely nervous when they are around guys that they are attracted to. Sometimes this might be clear because their voice might be broken or they could be looking at the ground. Other times they might seem cool, calm and collected. You might not even be able to tell. Which is why it is important to study their body language closely.

If she is nervous around you, she will start fiddling with things around her. Maybe something on a table or a part of her chair. She will probably also fiddle with her hair, maybe spinning it around her fingers or moving it backwards and forwards. Keep an eye on her fingers as well, she might spin them around each other or generally fiddle with them.

They mirror your behavior

You pick up your glass, she picks up her glass. You say a certain word and she adds it to her next sentence. She has her hands where you have yours? She is not copying you on purpose, it’s called mirroring. It is something that girls do when they are attracted to someone. It’s actually something that men do as well when they meet someone they like.

Have you ever started saying a catchphrase that belonged to someone else or started speaking like a friend does? These are both examples of mirroring someone’s behaviour. We do it more than we think, in fact lots of our behaviours are actually from other people and we have just picked them up. When a girl is attracted to someone she will start mirroring parts of their body language or their speech. It can be very subtle and easy to miss so you need to be paying close attention to pick it up.

They giggle a lot

There is a difference between laughing and giggling. Laughing is something we do when we find something really funny and are paying close attention to the joke or situation. Giggling is something we do when we are nervous. That’s right, it is a response to nervousness. Girls giggle a lot more than men do. If you say something that is not even funny and she lets out a little giggle, it’s because she is nervous and does not know what to say to you. It is a sign that she is attracted to you and giggling is her way of not saying anything she will regret. If a girl is giggling a lot instead of speaking, try and make the environment more relaxing for her. Maybe say something like “are you as nervous as me?” or uncross your legs and arms. That way you can both get to know each other.