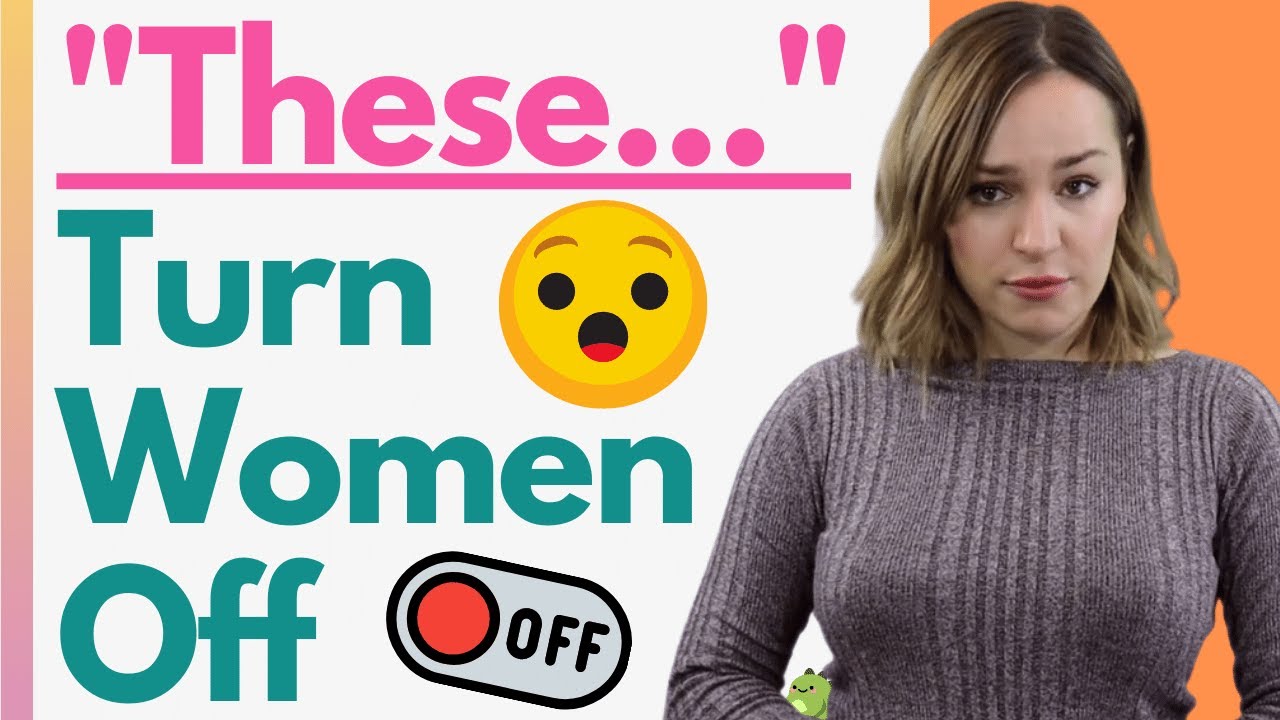 Do you know what turns women off, when it comes to the things you say?

In today’s video, we’re going to be discussing some classic female turn offs that men can end up saying, without even realising what they’re doing.

Things that turn a woman off

Today we are in dangerous territory because we are going to discuss some of the things that guys say which completely turn ladies off.

This is useful because it’s stuff that you will say on the date which will one stop you from getting the second date. Thing’s that will potentially get you a slap or well you’re not gonna have any intimacy, you know where I’m going with that.

In this video, you’re going to find out more about the things that you should not actually say.

Bragging about your gym gains

The first thing is bragging about your gym gains.

Yeah, it’s great that you go to the gym but unless we’re gym heads we probably don’t really care. No I can say that with confidence, we definitely don’t care.

We don’t care what type of routine you have, we don’t care about the protein shake you talk about and we don’t really care how much you can deadlift. It’s just something that us ladies don’t really have an interest in.

Like I said unless we are competing for bodybuilding tryouts, you are literally saying look at me! I’m filled up with testosterone, don’t you like me baby, I could pick you up and bench you 30 times.

It’s a little bit weird and it’s just it’s very arrogant at the same time. Remember women want to date positive guys. We don’t care how much you can bench, yeah it’s nice that you look good but apart from that we don’t want to hear it.

If you end up not being able to finish an actual sentence without inserting a swear word, it shows you have a lack of intelligence.

This doesn’t apply to every single relationship because there might be ladies that swear a lot themselves but as an average rule of thumb specifically on very first dates try to refrain from swearing.

It shows that you have to add lots of specific emphasis into your sentences to sound more sincere, to be more exciting and to show your aggression. Basically, it means that you aren’t confident with the things you have to say because you have to add in lots of emphasis.

If you are the type of person that turns everything into a sexual innuendo, you come across as slightly strange. Women will assume that:

1 – you are obsessed with sex

2 – it shows that you only care about sex with her and not actually her for who she is.

Women don’t ever want to feel used. This type of behavior makes you come across as a player.

In our JRMF video we actually talk about the signs of perfect attraction, that is having a little bit of sexual tension but making her feel comfortable. If you do one or the other it you could come across as a player. Or you end up getting friend zoned which you don’t want.

Try to refrain from turning everything into something sexual. I get it, she might be really hot, you are trying to get her into the mood by talking about sex but talking about sex really does the complete opposite and will turn her off.

Not texting a lady first

Next on the list, we have not texting first. Women do love the chase and if you want to know more about the psychology of why that is we do have a video dedicated to just that.

You can check that out in just a moment but in general, women hate to feel like they are the one that is driving the conversation. If you never text her first, one day she’s going to scroll through and think, “hmm all my messages are blue there’s nothing from the other person clearly I’m being too needy and clingy”.

She will detach and break away. That is when she starts testing you, she will start to withdraw and pull away, be a little bit cold. This is to find out if you actually miss her.

So yes if you don’t text first and you only reply to her messages every once in a while, she’s going to be very majorly turned off.

Sorry, what did you say?

Yes if you have to ignore your lady it’s a huge turn-off. Women don’t want to be second best to your smartphone, to Reddit, your PlayStation or to a sports game.

If you have to constantly say, “sorry what babes I didn’t hear you”.

It’s a huge turn-off, please listen if you can.

There’s something slightly misogynistic when a guy says something along the lines of, “you know what for a ladies razor it actually works pretty well”.

Or, “you know this nail polish here actually works really well at removing this adhesive sticker off my car”. As you guessed it, it’s a little bit rude.

Women don’t want to hear that they are anything less than equal to guys. That is where society is going at the moment. If you actually manage to come up with a phrase, sentence or suggestion that is for a girl’s product, that is kind of okay.

Therefore she needs to change to somehow be good enough for you. I get it sometimes we do pack on the pounds in a relationship but there’s a way of actually wording, it in a nice way.

That also means supporting her through that and if you make her feel that she is anything less than perfect to date you because she’s not good enough, this is going to majorly turn her off.

Guys sometimes don’t realize the emotional effect that these types of phrases have. I’ve had it personally, a guy told me that his ex-girlfriend was ridiculously curvy and I should consider getting surgery. I’m like well why do I want to be your girlfriend anymore if I’m clearly not good enough.

Is it that time of the month?

We can be angry at anything.

There’s something a little bit immature when a guy turns around and tells us that we are experiencing a certain scenario based on our bodily functions. It’s immature and women just do not like it.

Its kind of a swings and roundabout situation however women don’t put makeup on for guys. They do it for themselves. We want to buy a new eyeshadow palette, will start practising new eye techniques and we won’t leave the house.

We will put makeup on to make ourselves feel good.

So yes some of us practice new makeup techniques at 3 o’clock in the morning when everyone else is asleep, it’s something girls do.

We don’t wear makeup for your amusement. If you actually think that we are this perfect with all of our fake eyelashes on, our porcelain skin well then the problem’s actually you.

You are way too emotional

There’s something that is such a huge turn off when a guy tells a lady that she is too emotional.

Yeah, she has emotions, she’s a lot more emotionally stimulated and intellectual than guys. Sadly that’s how women have been created. It makes a lady feel very underappreciated. Basically, you are saying, how dare you have emotions as you have. Emotions? that’s weird I don’t understand it.

The problem is your problem. If you are dating a girl you have to understand that she does have emotions, she’s higher up on that emotional ratio compared to you.

By talking out loud, telling her that she’s in the wrong and that she’s very sensitive and overly emotional. Well, why would you want to date a woman if you weren’t willing to put up with the emotional side of her?

Talking about other woman

Right talking about other women I get it, guys like the looks of lots of different types of women. Their girlfriends don’t want to hear it, if you end up talking about how gorgeous a certain celebrity is don’t expect your girlfriend to give you any intimacy for that night.

She will think “wow I’m being told I’m not good enough”. It relates very closely to the body-shaming phrase we just talked about. Women want to always be as perfect as they can. They want to feel good about themselves.

So when you start talking about how amazing someone else is they almost feel like all this effort is going to nothing.

We don’t want to hear this. If you tell us that we are like our mums, we will probably not want to talk to you for the next couple of hours.

It really does turn us off sometimes we have less than ideal mother situations. For you to compare us to our mums, we’re like “whoa that’s very below the belt, I’m very offended right now”.

You might be doing it for your current girlfriend by talking about how bad your previous ex-girlfriend was. We understand that but you actually come across as very toxic.

It’s very immature that you can’t just let that relationship rest. It’s over, forget about it, you’re supposed to talk about positive things instead.

If you do stop bringing up how terrible she was and start sharing stories, we are kind of like you’re talking about her a lot. Are you over her? Why are you with me? It doesn’t actually spur us up to want to have intimate moments with you.

Now this ties in very nicely to the previous phrase and that is insulting her ex. If you feel it’s okay to insult her ex-partner because it makes you come out on top this is actually a very toxic trait.

It’s bad behaviour and obviously, this goes both ways. If she was doing it to your exes obviously this will definitely apply.

You are insulting someone that she has spent a lot of her time with. It’s a sign of immaturity that you are not willing to accept that she once had previous partners before you.

Thank you for getting to the end of the video. It really means a lot!

Something that you could do to really make my day is to subscribe to the membership on our YouTube channel.

Thank you! I really hope you have an amazing day, see next time.