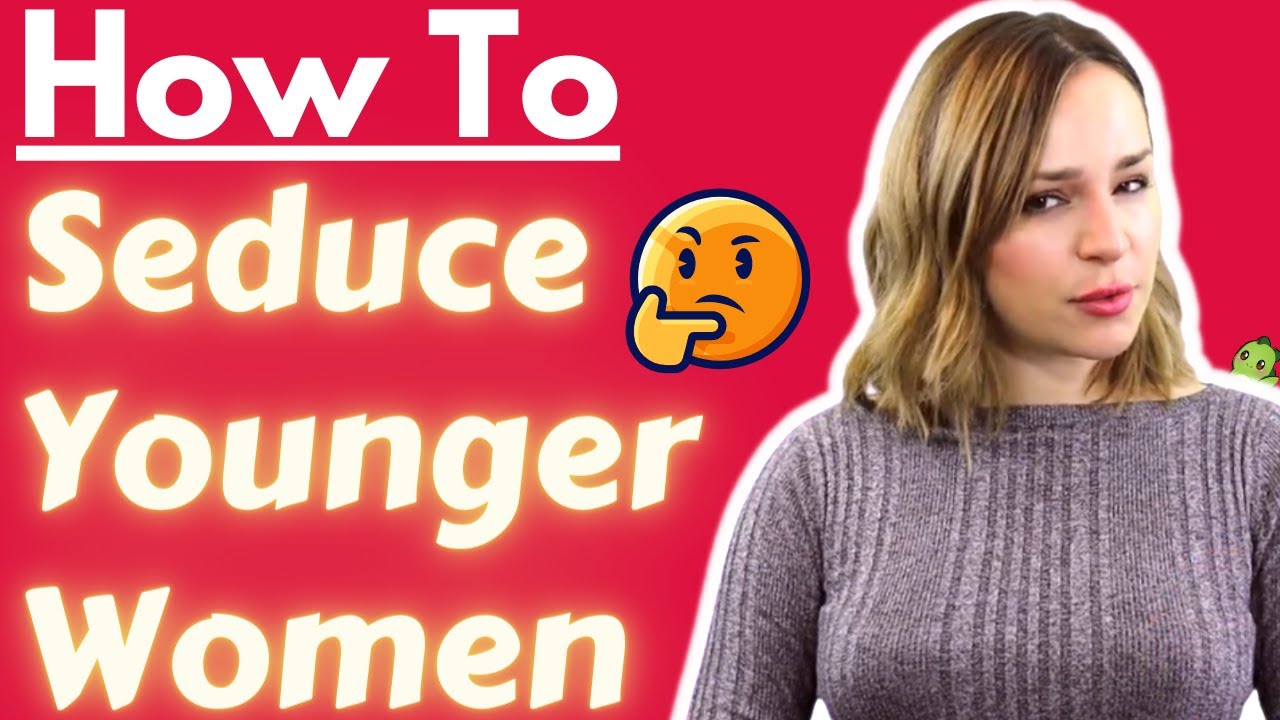 Learn how to seduce younger women (As an older guy). In today’s video we’re going to be discussing some tips you can use to get the attention of younger women.

Older men and younger women are known to make great partners. Younger women often like to go for the older men because they offer more stability and are more mature than the younger guys.

Older men like that younger women keep them on their toes, it’s a match made in heaven really, but it does not mean that it is easier for an older guy to seduce a younger woman. In fact, it can prove quite challenging. That is why it’s important to know what a younger woman wants and how to seduce her before making your move.

In today’s video I’m going to tell you older guys how to seduce a younger woman and win her over. Even if you don’t think of yourself as an older guy these tips should prove helpful.

How to seduce a younger woman as an older guy

Become a stable figure in her life

As I mentioned at the beginning of this video many young women are attracted to older men because they can offer them stability.

Although this might be the reason for immediate attraction, you need to show her that you can offer her stability by being a stable figure in her life.

You can do this by being there for her when she needs somebody to listen to her, always being reliable and by being on time for things.

Once you start showing up when she needs you to, she will recognise you as a stable figure in her life and won’t want to let you go.

Always be a gentleman

A younger girl expects an older guy to be a gentleman.

You have lived longer and therefore should understand how a lady would like to be treated.

It also sets you apart from younger guys who have often not yet mastered how to be a gentleman.

Being a true gentleman means doing things like letting her talk, hanging her coat for her, pulling out her chair and opening the car door for her.

This really will sweep a younger lady off her feet and fully seduce her.

Be prepared for change

Younger girls can bring a lot of fun into your life.

No day will ever be the same, which is exciting.

This is often why older men love younger women so much, but you need to be prepared for change. You might be stuck in your ways.

Sure, you want a younger girl but you like staying home on a Saturday night. Well, this will most likely change.

A younger women will want to take you to parties, on holiday and on adventures.

She will be willing to join in with some of the things you like as well, but you should be prepared for these changes before you seduce a younger woman.

If you are more willing to change, she will be more likely to date you.

Don’t give her all your time

The worst thing you could do is look desperate.

You don’t want to be available all the time for anyone that you are dating.

They might start to think, do they not have any other friends? Sure, you might want to spend time with her because you like her so much, but you need to try not to take this too far.

Be selective with how you spend your time and make sure that you have other things to do.

This won’t push her away, it will make her want you more.

Leave the door slightly open for her

If she starts to drift away from you, that is ok. It’s important not to freak out but expect the fact that she might not be back.

Obviously, you don’t want to act like you don’t care but you also don’t want to be heartbroken because it won’t make you look like the strong older man she expects you to be.

Remember that part of the reason she dated you was because of your maturity.

If she walks away then leave the door slightly open for her, but don’t be afraid to date other people.

She is probably doing the same and if she catches wind that you are dating someone she will probably be really jealous and will want you back.

Sometimes guys, you have to play the long game.

Date her without her friends around

Group dates can be really fun but if she is a younger woman, her friends could be really immature.

This might put you off dating her, or they might say silly things to her that could put her off you. Try instead to date her without her friends around.

Take her on nice dates that are just you and her.

She will love this and feel much closer to you and more connected to you.

When the time is right you can meet her friends but try not to go on too many dates with them.

Don’t just put all your moves on her

Girls love it when guys are mysterious.

They want guys that are going to hold something back and leave them guessing.

So don’t immediately try all your moves on her. It could make you look creepy, but it will also make it look like you are trying too hard.

You want to seduce her so sure you should be pulling out some of your moves and trying them on her.

Just don’t pull them all out at once, leave her wanting more.

Older guys often get a rep of being boring which is just not true at all.

If you want to seduce a younger woman then show her how fun you can be by being playful.

Take her out on adventurous dates, tease her and flirt with her.

You could even dress in colorful clothing to show off your playful side.

She will love to see this, and it shows that you can keep up with her which is important because younger women worry that older guys might get tired quickly.

Don’t be a creep

This is something that you can easily avoid. Go up to her and ask her about herself and if she does not seem interested then be a gentleman and leave.

Be interesting and tell good stories

Older guys often have so many great stories that could easily seduce a younger woman.

Don’t keep them to yourself! Share them with the girl you are dating.

She wants you to be an interesting person and tell good stories.

You might feel like you are showing off when you are telling her stories about places that you have traveled.

She will find these stories so sexy and will be so excited to hear about everywhere you have been.

She might even be picturing herself joining you on future holidays.

Show her that you are in charge

They don’t want you to be controlling, but they do want you to for example pick a restaurant when she can’t pick one.

She expects you to have your life together more than she does and this means that sometimes you need to take charge instead of her.

Seduce her with your mysterious older man charm by showing her that you are in charge.

Don’t let her arrange all the dates.

You want to seduce her, so you need to wine and dine her.

Make sure that you arrange some of the dates and surprise her as much as possible.

This will help create chemistry and keep that magical spark alive that you are searching for with a younger girl.

She wants to feel like her older guy is looking after her so show her that you know how to do this.