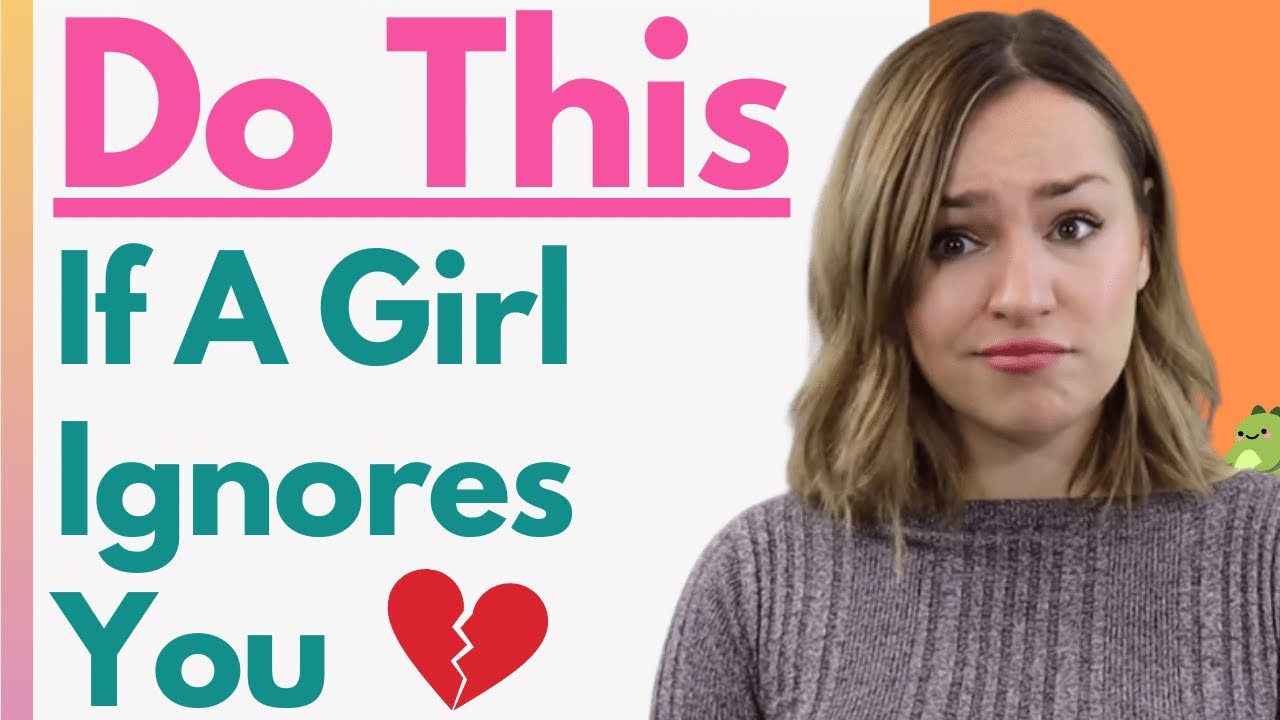 Being ignored by someone sucks doesn’t it? It may be that someone is ignoring your texts, she may be ignoring you by accident or it could well be that she’s ignoring you on purpose. And today we’re going to be discussing what to do when she ignores you, some handy tools to have at your disposal should this situation ever come about.

How To Stop Girls Ever Ignoring You Again

Feeling ignored by a girl is the absolute worst. Sometimes they do it on accident but other times they do mean it. Being ignored can leave you feeling confused, insecure and uncertain. All in all, not great! The good news is there are things you can do that will stop girls from ignoring you ever again.

Figure out if she likes you

Being ignored is not always the worst thing. Now, guys, Anna knows this first hand! Yes, I have used this technique before. It was less because I was playing games and more because I was nervous around the guy. It came across as though I was ignoring him which did work in my favour because he worked a little harder to grab my attention.

Sometimes girls will ignore a guy because well it drives them crazy! It makes guys work harder and keeps their eyes on the prize. Of course, it does not always work. Sometimes it looks like the girl is just uninterested and being rude.

So how do you tell if a girl is ignoring you because she likes you?

If a girl likes you and is ignoring you, you should be able to tell by studying how she is behaving. For example, if you catch her staring at you or making suggestive eye contact, she is most likely interested in you! If she is not talking to you but touches your arm or shoulder, she likes you. Keep an eye out for flirting techniques that she might be using even if she is ignoring her.

If you are nearly 100% sure that she likes you but is ignoring you, talk to her about it. If you don’t she may continue to ignore you due to being so nervous around you. Which means your relationship will go nowhere! Explain that you like her as well and would like to see where things go. Make her feel comfortable and safe. She will slowly come out of her shell and in no time you will find yourselves chatting away…never to be ignored again (unless you do something that sends you straight to the dog box!).

It is worth mentioning at this point, that she might also not like you. If you don’t notice any of the traditional signs or flirting, it might be worth asking if you have done anything wrong. Or just not spending as much time around that girl. Sometimes we have to realise that not everyone is going to like us but that doesn’t mean you are not awesome!

What to do if a girl is ignoring you

Ok, so you have got yourself in a pickle. You notice a lady is ignoring you. But what to do? Here are some tips and suggestions we have, that should do the trick!

Big gestures are often a way to a ladies heart. The lady might not actually know that you exist yet or she might be wanting you to put more effort into her. The big gesture will show her that you are interested in her, that you care about her and that you are attracted to her. It could be anything from writing her a love letter, poem or to taking her on her dream date. It doesn’t always need to be in public to be a big gesture.

Here’s a story for you guys, once I was dating a guy, who wasn’t giving me enough attention. Automatically I started to ignore him. To win me back, he got up on stage at a show we were at and read out a poem he had written for me. The poem itself was really romantic, in fact, I still have a copy of it. I was super embarrassed though and the introvert in me was horrified. I was actually more upset because he did it in public. I would have preferred that he did it in private so please remember this. Think about the lady who is ignoring you, would she prefer a big gesture in public or behind closed doors?

Big gestures do work though and can very quickly put you in the good books!

Give her some space

Depending on the situation it may be better to give her some space. If the girl is hurt or angry about something you have done, she might need time to evaluate how she is feeling. Trying to get her attention all the time will only anger her more. She needs some time to think about what has happened and come around.

You might find that after one day of space, she messages you saying that she has forgiven you and is over it. It could be a week later or even a month. The main point here is that you are showing her you respect her and her feelings. Which makes you seriously attractive. She will come running when she realises that you are fine to carry on without her and have shown her respect. You’ll find that she doesn’t ignore you after this!

Give another girl attention

This is a risky one! It could send the lady who is ignoring you running away or straight back to you. Girls hate it when someone they are interested in starts talking to another lady. Especially when they are ignoring the guy and expect all of his attention. So if you are say, in a social situation and the girl you like is ignoring you, start talking to the other girl at the table. Don’t make any comments to the other girl about your girl ignoring you. Girls always stick together! But just start asking her questions like, what do you do for a job? Or what’s your favourite type of animal?

This will drive the other girl wild. You might find that suddenly she starts speaking again or making eye contact with you. She will come running back and won’t ignore you ever again. If she ever feels like ignoring you, she will remember that one time you paid the other girl attention and will think well that didn’t work. She might still be angry but she won’t be ignoring you!

If your girl or a girl you like is ignoring you, ask her to sit down for a chat. Try and get to the bottom of why she is ignoring you. Ask her what you have done and if you are in the wrong apologise. Show that you care about her and her feelings. Resolve the issue and move on. Part of having clear communication is being able to tell your side of the story as well. Maybe she didn’t realise why you did whatever it was you did.

Make sure to also tell her that you really don’t like it when she ignores you and you would rather her just tell you what is wrong. That will stop her from ignoring you ever again and mean that you can just deal with issues in the future and move on. This creates a healthy relationship which is really important. Especially if you want it to last.

Earlier we talked about how a girl can like you when she is ignoring you. But she might also just not be interested. If you think this is the case, hold you head high. There are plenty more fish in the sea and clearly this was just not meant to be!