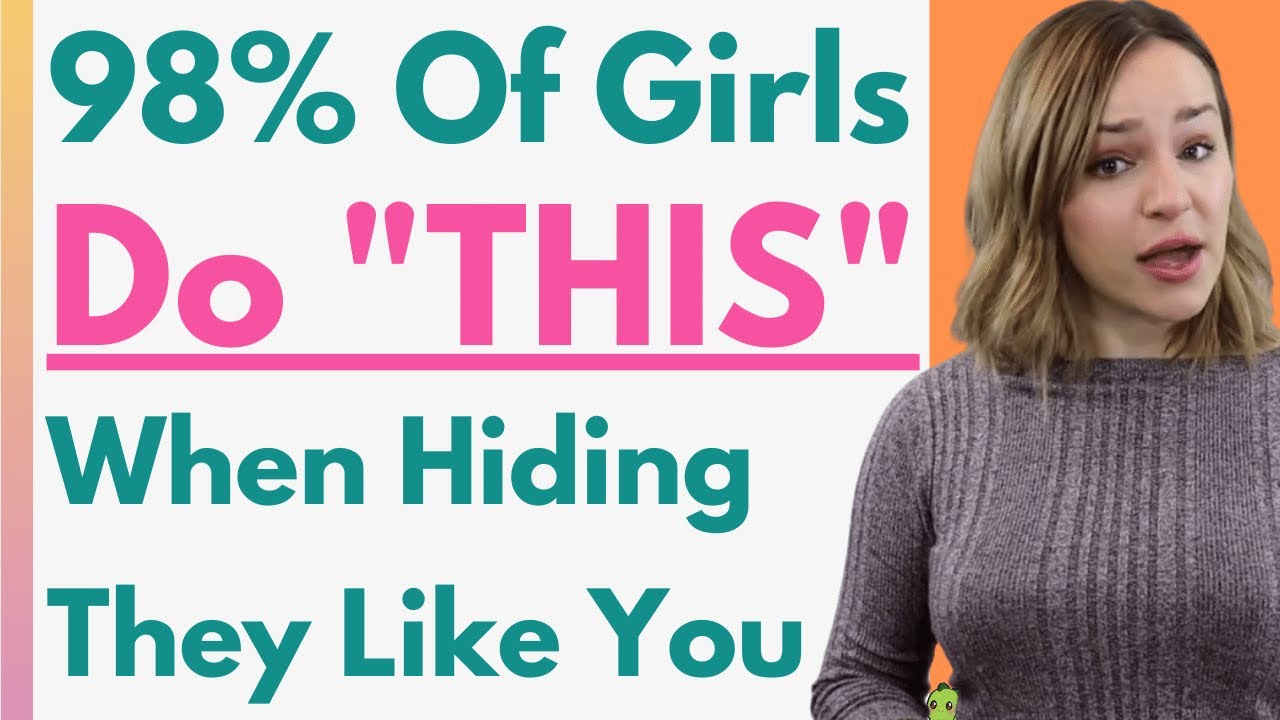 Learn how to know if a girl likes you but is hiding her feelings for you. When a girl secretly likes a guy she will start exhibiting little tells and by understanding the psychology and body language behind these you can figure out if a girl likes you or not.

You have finally met a girl that you like and you’re pretty sure she likes you as well but you’re not 100% convinced. Are you thinking what if she’s just being really nice or what if she really does like me but isn’t ready to tell me? I don’t want to be scaring her off. Well first of all all you have to do very simply is take a nice deep breath in, and just take a couple of moments, because you’re not alone. All men and women have a moment of do they actually like me too. The girl that you like is probably feeling the same way that you do, so you’re not alone in this and it is very much not unusual.

Now the path to finding the one is actually not a smooth one sadly, we like to think it is. For some people who end up with their high school sweetheart it’s yeah fine and dandy but for the most of the population it’s a bumpy ride. People don’t always reveal their true feelings and girls are often more secretive about theirs. They really do keep theirs hidden because they do not want to get hurt.

If you want her to lay out her true feelings, it will take some work and constant effort which means no giving up. In today’s video I’m going to lend you a helping hand and tell you what girls do when they are hiding that they like you. Then after this video you will know what to look for so that you never have to give up and be certain that the effort you are putting in is always going to pay off.

Signs a girl is hiding her feelings for you

You make her smile

She completely lights up when she is around you and smiles from ear to ear. You make her so happy, she just cannot hide it. She might be able to hide telling you that she likes you, but she can’t hide the smile that is right across her face.

She remembers tiny details about you

She remembers everything you have told her, even things that you said on your first date. She remembers small things like how you hate pickles and you think “wow she has a great memory”. Sure she might but more likely it’s because she likes you and we all remember things more if it is someone we like that told us them.

She knows things you haven’t even told her

She mentions things that you swear you have not told her, it is like she can read your mind. If you have been friends for a while before this then she might remember things from your past or just know you so well that it’s natural to her. Otherwise, she might have asked your friends to tell her everything about you so that she can surprise you by knowing things.

She displays hints of jealousy

If you mention another girl’s name, she acts like she is a little bit jealous. Until you tell her that it is your sister’s name you said and suddenly she is fine. She is acting a little jealous because she likes you and does not want you to be dating other girls.

She’s always up for meeting you

If you suggest something even if it is something that is really boring like going to the supermarket together, she agrees. It seems like she is always free when you want to do something. This is because she makes herself free to see you, cancelling other plans that have maybe cropped up. She wants to spend as much time as she can with you.

She engages with you on social media

She is always the first to like any pictures you post on social media, she comments on them with cute emojis and replies to your stories “that looks fun!”. She sends you memes and says “this is so us”. Basically, she is always around on social media to grab your attention.

She talks about her future with you

When she mentions things that are happening in the future like her sister’s wedding, she includes you in the plans. Even though it is a few months away and she has not even asked you yet, she mentions you being her date. In her mind, she wants you to be in her future plans and although she might be hiding that she likes you sometimes these details slip out.

She starts touching you

You might have been friends for quite a while when she starts acting differently. She starts touching you more when you are both laughing or to show you that she is listening to something you are saying. You notice quickly that she is touching you a lot more than she was before.

Her friends know a lot about you

She has told her friends every single detail about you. When you are not together, she is with her friends telling them how much she likes you. Even if she cannot admit it to you yet, she can tell them.

You make her blush

She looks into your eyes while you talk

Her eyes are not wandering around the room while she is talking. She looks straight at you and takes in everything you are saying. She does not want to miss a single thing and she often uses the things that you have said later to start another conversation or to surprise you somehow.

She tries to impress you

She tells you about everything she is achieving at work and turns up to your dates in new outfits. She is trying to impress you by doing these types of things.

She values your opinions

When you express an opinion she does not simply shut you down. She replies thoughtfully and tells you how much she values hearing things from your point of view. If she does not agree with something you say, she does not snap back at you, she tells you why and you both respect each other’s different opinions.

She cheers you on

Whether it is a personal project you are working on, a sports game or something at work, she is there to cheer you along. She is your biggest supporter and fan. She constantly tells you how great you are and how proud she is of you.

She looks after you

If you get a cold she brings you over chicken soup. If you are around at her house, she makes you dinner and even offers to go the extra mile and wash your clothes. Her motherly instincts are kicking in and she wants to look after you. This is some ladies’ form of love language and she might be reflecting this onto you to show you how much you mean to her instead of saying it aloud.

She engages you in long conversations

Small talk has left the conversation. You both now have long conversations about topics that are deeper and more complex. Every conversation seems to bring you both closer together and you learn more about each other. Instead of normal date talk, you are talking like you are boyfriend and girlfriend.

She takes pictures with you

She no longer asks you to just take a picture of her, she wants a picture of both of you. She even posts the images on her social media showing other people that you are together, even if she has not told you that yet.

She has a connection with the people in your life

You have not known each other for that long but she has instantly connected with your friends and is already close to your sister. When a girl likes you but is hiding it, she will instantly and very naturally form a connection with those closest to you. It’s a good sign.

She is generous with her compliments

She doesn’t shy away from pointing out all the wonderful things about you. From how great your hair looks today to how caring you seem, she is being very generous with her compliments.

She shows you her quirks and flaws

She opens up and shows you more of who she really is. We all have two sides to ourselves, the side we show to the world and then one only a few people get to see. This is of course the real side of us, and we don’t let very many people see it. So, if she does start showing you her quirks and flaws, she must like you and trust you.

She drunk dials and texts

She is out with the girls having a night out and after a bottle of wine, you are the first person she messages. She might just text you and profess her love for you or suggest that you meet up. Other times she might phone you and then pretend she didn’t realise that she was. You are the person she is thinking about when she is in her most honest state.

She lets her guard down

She knocks down some of her walls which she has put up to protect herself. Instead she is more vulnerable and open with you and tells you about anything that is on her mind. While she has her walls down it’s a great time to ask her point blank if she has feelings for you.

She tells you that she is not dating anymore and makes it clear that she is off dating apps. Showing that she only has eyes for you.