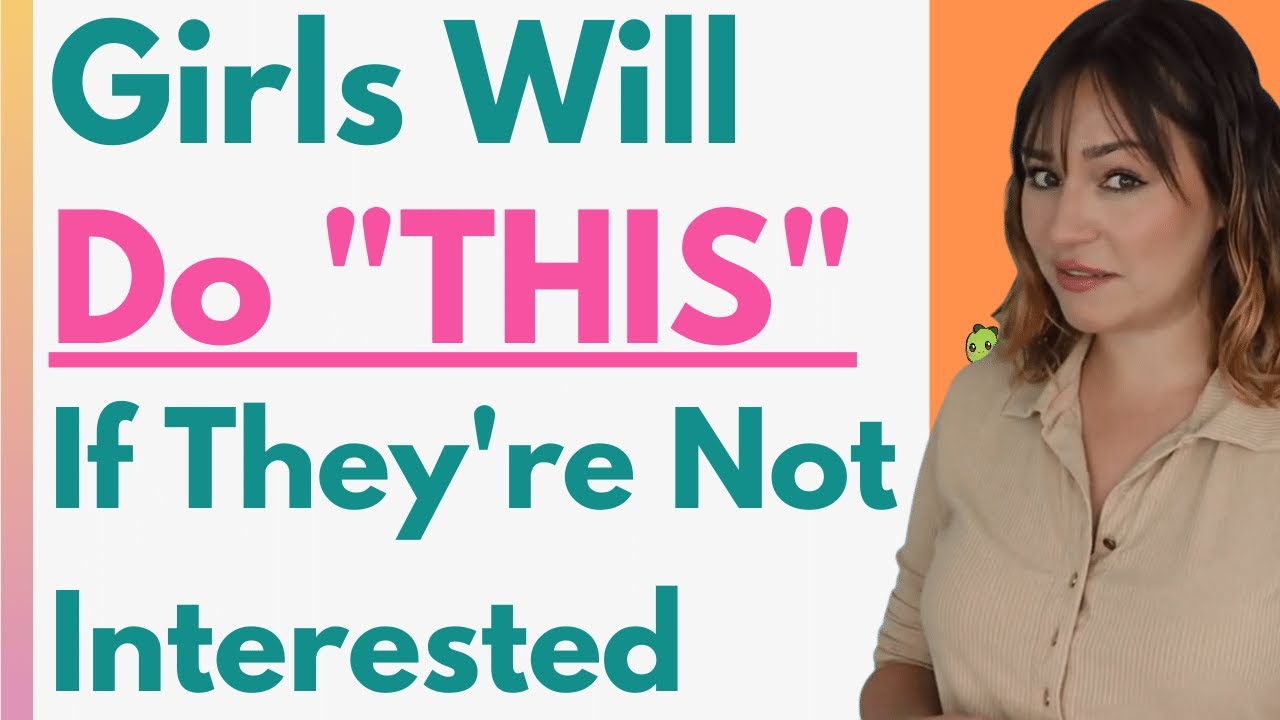 Learn how to tell if a girl likes you or not in today’s video where we discuss some of the things a woman will do if they’re not into!

It’s an extremely tricky situation to be in. You’re seeing a girl and you think that she feels the same way about you as you do for her, she is sending all the right signals but then they all stop and she goes cold. You are left wondering if she is into you or not. Girls are all about signs and although they are not as direct as men, they do have a way of sending their message across. And you guessed it today I’m going to tell you about what a girl will do when she’s not into you. It’s not the nicest thing to talk about but it’s important to know what to look out for so that you do not get hurt. So without further ado let’s dive in, like and subscribe.

Signs a girl isn’t into you

She gives you one-word answers

It doesn’t matter if it is face to face or via text, if she is only giving you one word answers it’s not a good sign. Women only give one-word answers to people they cannot be bothered talking to. She is either still talking to you because she wants to keep the door open, or she is trying not to be rude by ghosting you.

For example, you might message her “hello, how is your day going?” and if she replied “fine”. Then you know she has either had a really bad day or she is just not into you at all. Either way you should speak to her about it and that way if she doesn’t like you, you can leave on good terms.

She does not know what she wants. She can’t decide where she wants to go on a date with you or if she even wants to see you again. You ask her questions and she replies with vague, indecisive answers instead. Her being indecisive with her answers are her way of saying ‘it’s never going to happen’.

She doesn’t reply, she cancels dates at the last minute and she forgets important things you have told her. In other words, she’s flaky. It’s not a personality trait to be flaky, it’s a choice. Women are naturally very good at organising their lives. If they miss something or forget something, it’s because they did not care enough about it.

If it happens once that is fine but if you notice that she keeps being flaky then take the hint and hit the road. There are plenty more fish in the sea.

She stands you up

Imagine this, you have both been texting for a while and it has finally come time to meet. She asked you to arrange the date and you booked her favourite restaurant thinking about how much she would love it. As you make your way to your date, you are excited and then disappointed because she stands you up. You are sitting alone, upset and hurt.

If someone treats you like this, it’s so rude and you should never see them again. If a girl does this to you it really shows that she is not into you and you need to move on.

She never texts or reaches out to you

You are always the one to text her first. Good morning texts, afternoon texts, evening texts and texts when she pops into your mind. It’s romantic but you are not getting the same treatment back. You will quickly realise that she is not texting you first at all. This is a sign that she is not into you. She might reply to your messages, but they will be short and sharp. It’s time to stop talking to her and try your luck with another girl who treats you better.

If you have an emergency in your life and she knows about it and does not reach out to check that you are ok, this is another red flag. When girls care about guys, they will always reach out and check in on them. So, if she is not, it means that she does not really care about you or how you are feeling.

She is not honest with you

If you keep catching her in lies, you should be worried. It’s never good when anyone lies and it’s not a good character trait. She could be lying about her job, her friends or that guy who really is only her friend. Whatever it is, it’s not cool and you need to tell her that you know she is lying. If she admits it and explains that she just wanted to look cool in front of you then you can maybe work it out. If she says anything else then you need to leave her. It’s sad but you don’t want to be with someone that is fine with lying to you.

When a girl is into a guy, she will always pick up his calls and respond to his texts as soon as possible. If she likes you, she would be so happy to hear from you. If she is not into you however, she will take ages to respond and when she does it is probably late at night when she has nothing else to do.

If you are with a girl, you want her to be excited to talk to you, you want to be the centre of her world. Not leaving you on read.

She refers to you as her friend

A girl that likes you would never refer to you as a friend because she wants to be considered more than your friend. If you are on a date with a girl and she introduces you as ‘her friend’ it could be because she is not into you.

She could of course just be unsure of what to call you as you have not discussed titles. If she does this coupled up with any of the other things in this video though it might be because she is not into you. She is keeping you at arms length by calling you a friend so that she can let you down gently.

She walks away when you get close

If a woman wants a man, she makes sure he knows it. She might do this by casually glancing at him often and then looking away. When you lock eye contact you might feel like it is a random coincidence, but it is not, she planned for it to happen. On the opposite end of this, if a girl is looking away from you as you approach her, or she is looking down at the floor. It’s a sign that she is not interested in you. She might feel uncomfortable that you are in her space and you should leave.

If you catch her looking at you though, it’s a good sign. She might just be into you.

You can tell so much by someone’s body language, you just need to look a little closer. If she displays something called closed off body language when she is around you, it is a sign she does not want to be there. Closed body language means she would have her arms crossed, her head facing down, her legs crossed and be speaking in a quieter voice than normal. She might also not look at you while she is talking to you, roll her eyes without meaning to and not listen while you are talking. These are all signs that she is not into you and you should quit while you’re ahead. You deserve someone who is really going to treasure you so go out there and find them.