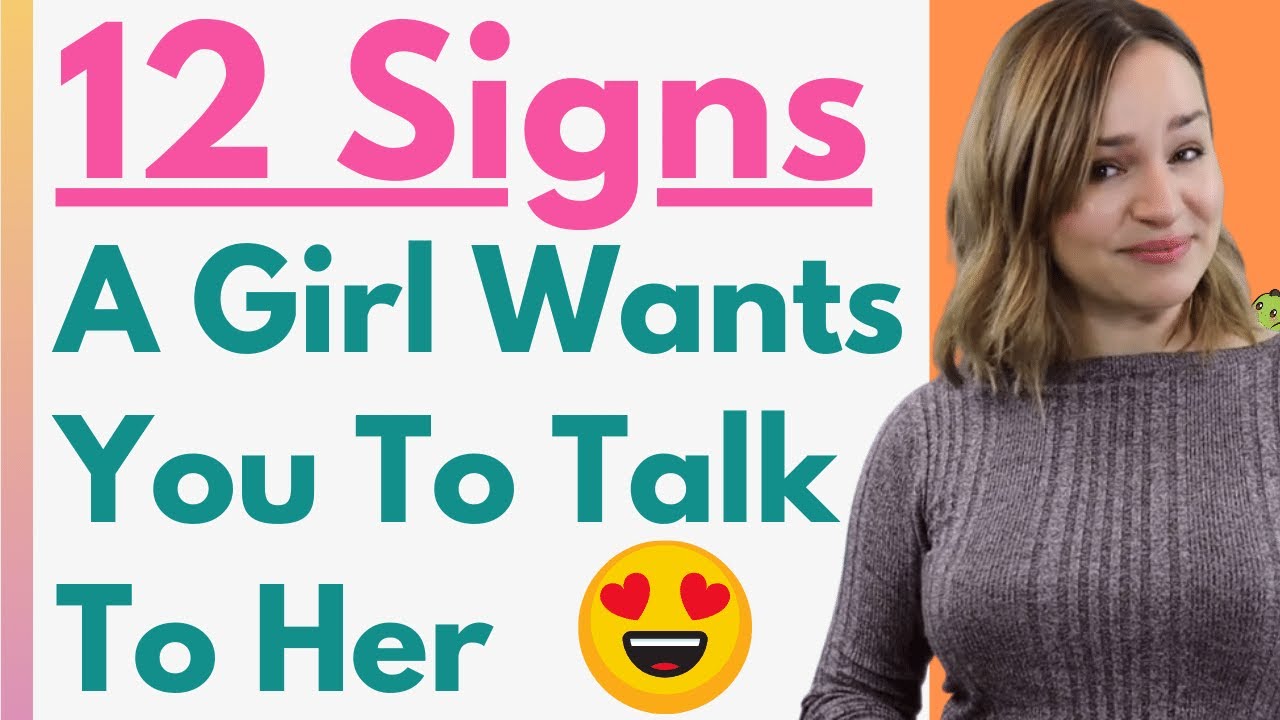 It’s important that you read these situations correctly so that you don’t get a reputation for being creepy or a little bit weird. In today’s video I’m going to teach you what girls do when they actually want you to talk to them, so that you don’t make any mistakes. You can then look out for these signs that you don’t end up getting confused in the future.

Signs a girl wants you to talk to her

She looks at you even when she is doing something else

Women are multi-taskers; they are known to be able to do multiple things at once. Which means they can look at someone and think about them while they are working on a report for example. If a girl you like works with you, you might notice that she is typing an email while looking at you from across the room. It might just be a quick glance but it’s enough for you to know that she is interested in you. She probably wants to get to know you more and you can feel confident about approaching her and talking to her.

She is around wherever you are

If you are at the coffee machine, you notice her near the coffee machine. You spot her at your favourite bar or just in your local area. She is trying to grab your attention and get you to talk to her. She wants you to spot her and say “hello, how are you?” and then the conversation flows from there. Basically she is putting in some effort to chase you but she wants you to make the first move.

She scans the room you are in

Without her realising you might be looking at her and notice that she is scanning the room and looking for you. This happens a lot when your crush is at the same bar as you or is in the office where you work. She wants to catch your eye in the hope that you will strike up a conversation.

Most relationships start from a good conversation and grow from there. So this is a very important step! If you notice her scanning a room for you, it’s time to strike up a conversation because she wants to talk to you!

She makes herself look vulnerable

When a woman is ready to talk to you and wants to flirt with you, she will suddenly show you that she trusts you and will make herself vulnerable by doing this. She will do this by showing you her neck because she is biologically hardwired to do this when she wants to show a man that she is attracted to him.

She might also tell you something about herself that leaves her open and gives you a chance to make conversation with her.

Preening is when a girl touches herself to make her look more attractive to you. She might put her hair behind her ear, touch her face or specifically her lips. This will draw your attention to various parts of her body which is what she wants to do. Men are typically attracted to these parts of a woman’s body and especially like it when a woman’s neck is exposed.

Even though the way we date may be changing, we are all programmed the same way and are attracted to the same parts of a person’s body. That is why something like a ‘neck’ might seem an old-fashioned thing to find attractive but actually it’s not. We might not have ‘girls with nice necks’ on our dream dating list but subconsciously, we do have this. If a girl is preening herself she wants you to look at her, approach her and have a nice conversation with her.

Keep an eye on her feet

When a girl likes a guy, they point their feet in the direction of the guy. If she is standing with her friends talking and you notice her feet are facing towards you from across the room, it is a good sign. Try and catch her eye and send a smile her way, if she smiles back at you then you know you can approach her and talk to her.

This sounds a little backwards and like something that would happen in the tudor times but actually it still works today.

Wrists have always been considered a sensual part of a woman’s body and when a woman shows you her wrists by pulling up her sleeves for example it is because she wants to attract you. Or she might put her hand on your face so that you can see her wrist. She will draw attention to her wrist in whichever way she can. If she shows you her wrists then she wants you to walk over to her and speak to her so you should do just that.

She smiles from ear to ear

Keep an eye out for a smile. If a girl is not smiling at you at all, it’s because she doesn’t want to speak to you and probably does not want you talking to her. If she is smiling, then she probably does want you to talk to her. You are making her happy enough to make her smile!

She will most likely smile every time she sees you walking towards her or when you enter a room. This is a great sign and gives you the permission you need to make the first move.

She speaks with a raised voice

She might be naturally softly spoken in general as most ladies are. When you are in a room full of people though, you hear her voice from across the room. She might not be doing it on purpose, but she is speaking louder than she normally would because she wants to get your attention.

If you hear her speaking then you are more likely to notice her in a room and go up and speak to her, which is what she wants. Perhaps what you want as well!

When a girl plays with her hair, it exposes her neck but is also a way of her flirting with you.

Women often flirt without even saying a word, especially at the beginning. She might not have even spoken a word to you yet, but she is playing with her hair from across the room to try and entice you over.

Although this might be a hard signal to really recognise because girls do constantly play with their hair when it gets in their way, it is worth noticing so that you know the girl wants you to approach her.

If a woman looks straight at a man, he is likely to approach her. So if she does look at you dead in the eye and maintains eye contact then it’s a great sign. This is pretty much a sure-fire way to know if a girl wants you to talk to her or not so keep an eye…out!

If all else fails and a girl thinks that the guy has not clocked on then she will cut straight to the chase. She will either come up to you and just start talking to you. Or she will tell you that she wants to talk to you.

Girls are very good communicators and are normally better at communicating versus guys. If a guy has not made his move then she will just take matters into her own hands and tell you honestly how she feels.