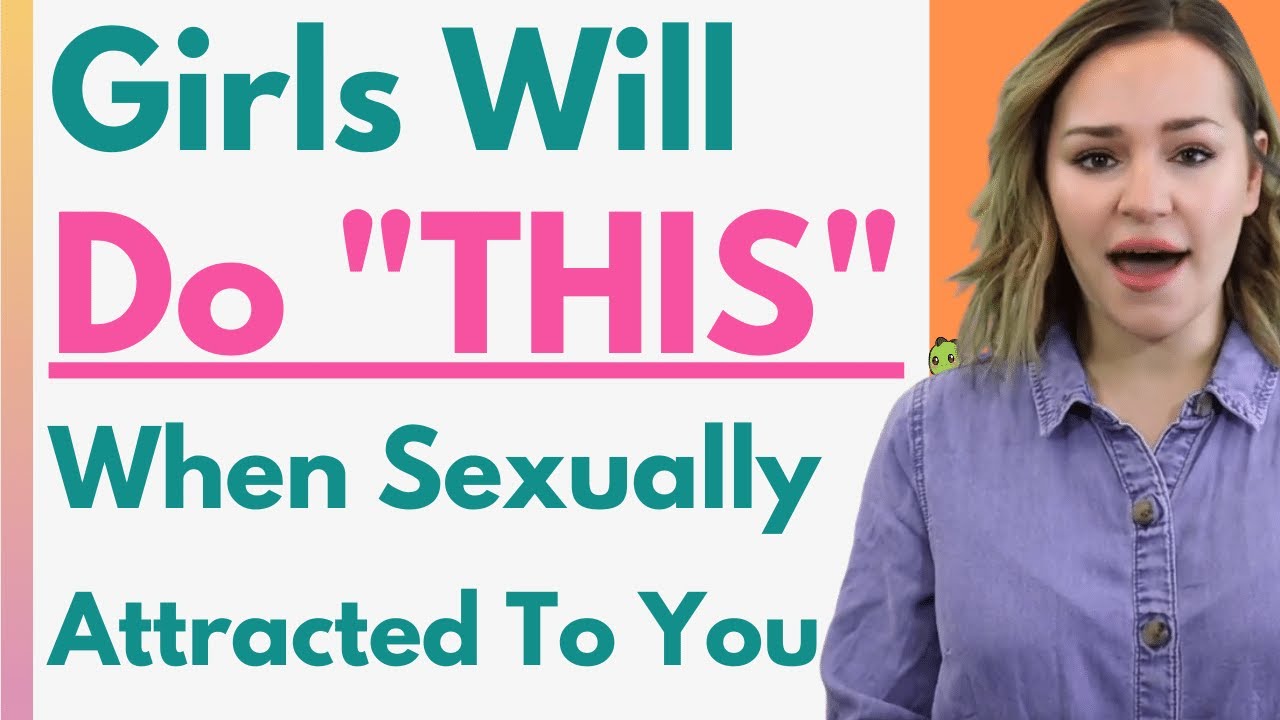 Signs a woman is sexually attracted to you

She wants to sit next to you

It doesn’t matter whether you have met in a bar or at work, this is something girls do when they are sexually attracted to you. Girls love to be close to someone they are attracted to, it means they can get the person’s attention more easily, they can flirt with them and they can see if the other person likes them according to their body language.

A girl might say bluntly “I want to sit next to you” or in a group setting you might just notice that she is next to you and wonder “how did that happen?”. It’s so subtle you might not even notice but it is something to watch out for if you definitely want to know how she feels before making your move.

She looks at your lips

You are busy talking about world politics and you notice that she is looking at your lips. Male lips are incredibly sexy to women, they are the gateway to you and whenever girls get a chance, they will look at a guy’s lips. She will be thinking about kissing you when she is doing this. She might look at your eyes and then dart down towards your lips so quickly you don’t even realise.

Stay vigilant and on the lookout for this. It’s something we only do to guys we are sexually attracted to and not to random men.

She likes to touch you

You notice that she will use any excuse to touch you. She touches your arm when she laughs, the top of your leg when you are speaking or your shoulder when you are walking next to each other. This sign of sexual attraction you should be able to pick up. She is not just touching you for fun, she is doing it because she wants you to know how she feels about you so that she can make the move.

Girls don’t really like making the first move when it comes to sexual attraction, they want the guy to do it.

You notice that she smells expensive. When a girl is sexually attracted to a guy she will wear her most expensive, sexy fragrance. We associate a lot with smell and we can subconsciously like someone or not like them depending on how they smell.

Girls want you to associate them with a certain smell, they might even buy it just to wear around you. This is so if you smell it on the street, you think of them. They also want you to like the way they smell because it is a huge part of sexual attraction. Remember that if she is smelling nice for you, she is also wanting you to smell nice for her so make sure to buy some nice cologne to grab her attention even more.

She is smiling a lot

When you first meet each other she won’t be able to wipe her smile off her face. Have you ever met someone and simply not been able to wipe the smile from your face? Like you’re telling your brain that you need to stop smiling so much but you simply cannot. A girl will do this when she meets a man that she is sexually attracted to instantly. If you hang out more than once you might also notice that she still keeps smiling. This means she really does like you and that you should arrange a date with her.

She displays these subtle hints

Women love to display very subtle hints when they like someone. It is not something they do on purpose, it is just something they instantly do! She doesn’t want to embarrass herself by giving everything away so she leaves clues for you to pick up. She might keep touching the ends of her hair, I told you they were subtle! Or she looks at you when she thinks you are not looking (even though you are!). She keeps touching the back of her neck and giggles when you make a joke. She lets one of her body parts lean against you as you talk and licks her lips often.

She might also start to mirror your behaviour. She is not trying to be a parrot, it is something we do when we are attracted to someone. We start to pick up their behaviour, she might start to use some of the unique words you use or pick up her glass at the same time as you. She does not actually realise that she is doing this but it is a sign that she is sexually attracted to you.

She sends you photos of herself

I don’t mean dirty photos although if she does send those, you will know straight away how she feels about you. I am talking about photos with her out with her friends or nice selfies she has taken. If she sends you photos of her with her friends it’s because she wants you to join in on the fun. A selfie is a little more intimate, that normally means she wants to remind you that she is around and wants to do something with you, like go on a date.

She sets up a date that is close to your house

It might have been her turn to arrange a date and you notice that she has picked a movie theatre that is right around the corner from your home. This is not a coincidence, it’s a sign. She wants you to take her back to your place after the movie because she is ready to take things up a level.

Almost nothing a girl does when it comes to dating is an accident, she has planned out everything and wants you to solve the clues she is giving you! Don’t bust her for doing this because she will be embarrassed. Instead say “hey I live around here, would you like to come back to mine?”. She will definitely take you up on your offer and be happy that her plan worked.

She has many reasons to text

“Did you have a good day at work?”, “What’s your favourite animal”, “OMG the funniest thing just happened to me”. These are all excuses to text you! She just wants to be in contact with you all the time because she is attracted to you and does not want you to forget about her. Her texting you all the time is a way for you both to get to know each other before you move to the next step which is dating. You might notice that she texts you first most of the time and you are actually not having to put in that much work. Well she is happy to put in some groundwork but not too much. If you leave her hanging by not replying to her texts or arranging a date, she will move on. So you need to be proactive when a girl is acting like this. She is putting all of her cards on the table and wants you to show her how you feel about her.