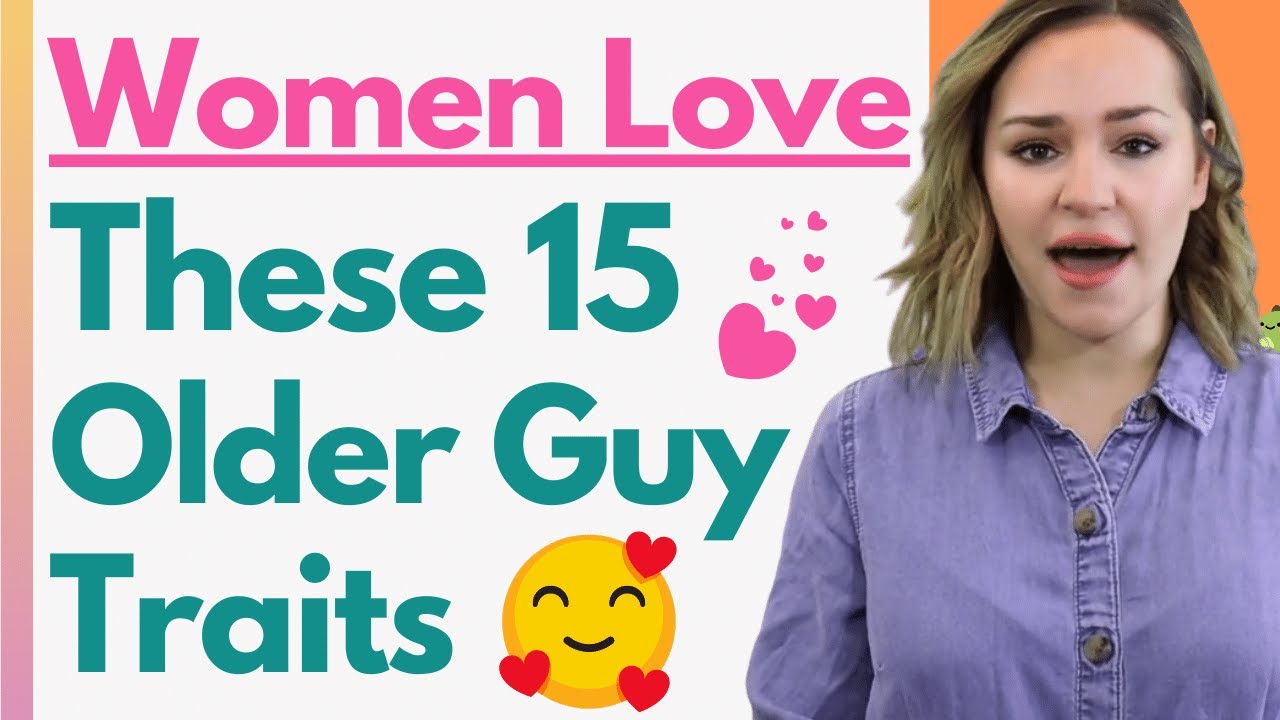 What attracts a younger woman to an older man?

In today’s video, we’re going to learn about this interesting form of attraction and some of the important qualities and traits younger women seem to chase after in older men.

You could be the older guy wanting to learn how to attract younger women as an older man.

Or you may be in the opposite position wondering thinking “why am I attracted to older men”?

Rest assured, it’s not an uncommon position to find yourself in either way.

There are some noticeable traits that draw these two together. Stay tuned and I hope you enjoy today’s video about why women like older men.

If you have ever wondered why there seems to be an attraction for the younger ladies to like the old guys, well this is the video.

Think of the likes of George Clooney, Ryan Reynolds and also Barrack Obama.

There’s a fascination that women have.

We’re going to explore a common theme that younger women have in order to want to date older guys.

So stay right there, don’t move an inch. My name is Anna and get ready for the video.

To heal a less than ideal fatherly relationship

There is a theory that they were neglected by their fathers. Which means they’re more likely to want to date an older guy.

A study by Saint Mary’s University discovered a link between neglected daughters and also their need for attention from an older man.

We could say to fill that void they never had, also known as daddy issues. So she is seeking something similar to her father to fix her broken heart. Or maybe for some words of wisdom, advice and guidance.

However, she may not always be looking for an actual romantic relationship.

It could be she just wants to seek out an older guy for wisdom, life mentorship, whatever it may be.

However, things may progress into a romantic relationship.

For the majority of women that have had a less than ideal relationship with their own father, they do seek someone to protect them and to care for them. This typically comes down to well from an older guy.

Sarah Skenzelberry and Down Fowler investigated the actual attachment styles of women.

That dated guys 10 years older than they are and it turns out there is actually no correlation, no link to a daughter with daddy issues.

Wanting to have a romantic relationship with an older guy, can happen accidentally.

They are responsible and mature

Now please do not hate me for this but guys kind of grow up a lot slower than women.

There’s no rush for guys, let’s face it and an average couple of the same age can potentially reach conflict.

When they feel that, I don’t know he’s lacking in responsibilities, he’s not pulling his weight or doing enough.

It could feel like she kind of does all the work and he gets away with it therefore that would be a heavy attraction to an older man.

Well she feels it would make sense, women want to date mature guys, they don’t want to date teen boys so they feel that an older guy is much more loving, a lot more supportive and loyal.

He has kind of gotten over the whole boys will be boys phase.

They know what they want in life.

They know what they want in life

An older guy knows what he wants out of life.

That’s because he has failed a couple of times and right now he has solidified what his interests are, his values beliefs and well his core values.

So this is something that we all get eventually later on in life.

A woman really does appreciate this in a man.

Why wait for a guy to grow, when you can just date an older guy? He has ambitions career goals and he is already potentially halfway to actually achieving his goal.

They are more caring

Older men are much more patient, they want to work things out in a relationship and they refuse to play any games at all.

They have become, let’s say, masters of communication well that is due to their experience of past relationships. They have had many arguments, many conflicts before therefore their current conversations are more soothing to a lady.

Let’s be really honest here not every older guy is guaranteed to have figured his life out.

We kind of assume this from a mature person.

They’re not afraid of commitment

A younger man is definitely afraid of commitment, he has that fear of losing out on his freedom, if he has a long-term relationship but for an older guy he is much more open to wanting to settle down with someone.

Which becomes the perfect match for a lady.

You probably did not expect to hear this so let’s talk about it.

It is true a lot of younger women are for the potential of the time, attracted to an older guy for the financial security that he does bring.

Whether it’s trying to find a cooperating sugar daddy who you know, showers them in gifts, Land Rovers, houses, all that jazz.

Or predominantly just a guide that they can have a relation with, that is also financial comforting.

That is able to treat her once in a while.

They have wisdom about them

An older man has a lot of topics for discussion.

His life experience well it’s brought around a lot of wisdom and this really does intrigue the younger woman. He has had a past, he’s got many different stories and she wants to hear every single one of them. She never gets bored, hearing about his adventures in life and it’s a great attraction point for a younger lady.

They are experienced in relationships

We briefly touched on this a little bit earlier, in this video but the older man has had his fair share of long-term romances, one night flings and he’s also experienced a lot of heartaches.

This means he’s practised his skills, he knows how women think in a relationship.

He has a bit more experience, he has learned what he wants in a partner which is a great thing and he is willing to make things work and compromise.

His wild phase has passed and he definitely understands that a relationship well it takes a lot of time, commitment and trust.

They become partners and this really helps each other to grow.

They don’t mind helping with housework

If there is an older man involved, they do not mind housework. Ask a guy in his 20s to hurry up and clean the kitchen he may avoid doing it completely or do a bad job so that you never ask him to do it again.

However, with a mature guy, he will naturally clean without being told to do so.

This is because he has learned the responsibilities of living and taking care of himself.

He is much more willing to help his partner out with jobs, to ease up on the amount that she actually does. Plus he probably wants to have a clean kitchen himself.

They keep their head down

Mature guys avoid drama and confrontation. They prefer the root of just sitting down in a civilized fashion and talk about things out in the open with someone and come to some form of beneficial agreement for every party involved.

This basically means they hate having arguments.

It’s just unnecessary drama but the younger man however is readily available to prove his word and to expel his manliness.

If he has been questioned this has advantages in social situations. Let’s say at a bar there’s someone that’s had a little bit too much to drink and an argument kicks out with the older guy. The older guy knows he doesn’t want anything to do with this. He will try to avoid those ugly arguments and try to defuse them as quick as he can.

Therefore he is more socially aware of his actions and his words around everyone not just bar people and obviously, this means he’s a lot better at picking up on social cues.

They have less emotional baggage

A mature guy will not enter a relationship with an ulterior motive or even a lot of emotional issues.

Potentially brought on from his less than ideal childhood. If he did experience something like that he has most definitely worked things out throughout the years. He knows that he shouldn’t enter into a relationship with lots of issues going on.

He’s strong and stable and ready to have a successful relationship. Therefore this proves that women don’t want to date guys with baggage. They want to down to earth guys that have figured themselves out.

So that they don’t have to essentially mother them despite what the media tells us.

We don’t want to fix a guy and build them up. We want them to be on our level, to begin with.

A younger guy doesn’t want to feel tied down which is what we talked about briefly. He may give into temptations that are all around him and cheat on his partner to fulfil his needs. Whereas a mature guy really does understand the turmoil of cheating.

He knows what it creates, the emotions it brings and he really wants to work things out. In his relationship he will stop the cheating temptation for the whole gracious greener approach. Or he would just leave the relationship if he is not happy so a woman wants to avoid that heartache phase and go straight to an older man.

One that will not cheat on her and values her for her.

They are more romantic

An older guy understands that a relationship needs to be nurtured. The other person needs to have their love language met continuously. They need to feel desired and told regularly how much they actually mean to each other.

In order for the relationship to actually work long term, a younger guy misses out on this experience and he would just assume that buying flowers on valentine’s day, two years ago was enough to keep that passion burning in a relationship.

An older man, through this experience of his own relationships, knows in general, not always but usually what a woman wants.

He knows he has to keep making the relationship work.

They don’t lie about what they want

Of course, a friend with benefits situation can still happen with a mature older guy.

He is honest about what he wants, he won’t go on a couple of dates.

Then string a lady along with no exclusivity, to then say he just wants things to be very casual instead. He will be honest from the get-go about his wants and also his emotional needs.

So that he doesn’t hurt the other person.

They are experienced in the bedroom

Dating experience not only brings that romantic gesture and obviously sweet nothings to the relationship table.

It also brings some experience in the actual bedroom as well. So a woman would feel more drawn to an older mature guy.

As she assumes that well he knows a thing or two about what a woman wants in the bedroom. So he is assumed to be, we would say a god under the sheet, potentially this doesn’t always guarantee it but it just means she can enjoy the moment.

She hasn’t got to worry about having to teach someone those types of things, you know what I’m talking about. When she can just go straight to someone that has a whole bag of everything. Without her having to try too hard.

We made it to the end of the video.

Have an amazing day and see you soon.