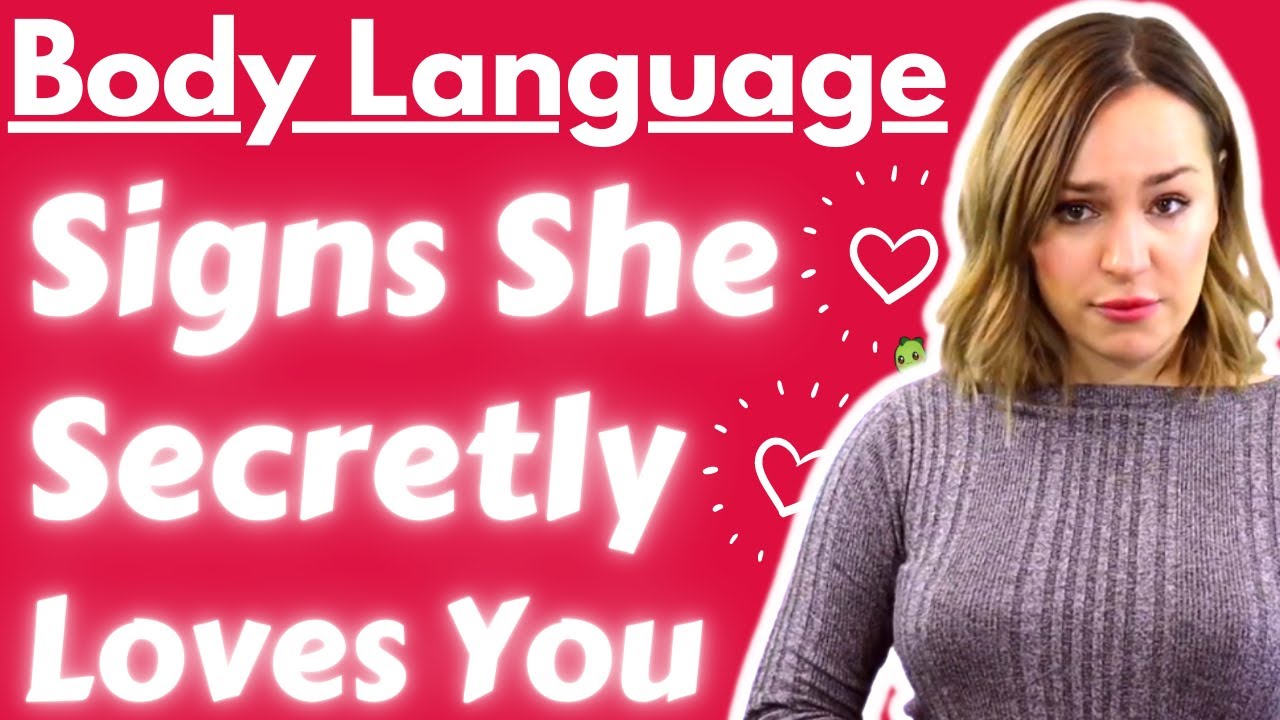 20 Body Language Signs She SECRETLY Loves You – Work Out If She Likes You Without Her Telling You.

In today’s video we’re going to be discussing 20 subconscious body language signs a girl secretly loves you. Learn how to pick up on the subtle signs that reveal how a woman feels about you.

Did you know that body language can show you whether someone loves you or not? Body language is not something that well we normally think about because it happens on a subconscious level. It sends a lot of information out into the world about us though and tells other people a lot about who we are.

We also spend a lot of time reading other people’s body language and we do this without even thinking. Now since we have this useful skill we should probably put it to some effective use.

So today gents I’m going to talk you through some different types of body language which shows that she secretly loves you.

Body language she secretly loves you

Pay attention to her hair

You can tell a lot from the way a girl plays with her hair. She might swipe it away from her face, twirl it in her fingers or flick her ponytail around.

Whatever she is doing, it’s to draw attention to a part of her that she wants you to see.

It can also be a form of flirting if it is paired with giggling. Every time she plays with her hair around you she is showing you that she likes you.

Which parts of her body does she touch?

Sometimes you need to study a girl’s body language a little harder so that you can understand how she is feeling and what she means.

A girl will often touch different parts of her body because she wants you to pay attention to them.

She might think that her eyes look great so she will put her hands around that area. Her legs might also be something that she would like to draw attention to, so she might rest one of her hands on her thigh.

If she is trying to draw attention to different parts of her body then she wants to impress you.

Does she seduce you with her gaze?

Are her eyes fixed on you? Is she staring deeply into your eyes? Does it feel like she is flirting with you through her eye contact?

She could be trying to seduce you with her gaze.

This helps to build chemistry between you both, but it also shows you that she has strong feelings for you. If you catch her staring deeply into your eyes it could be because she is falling in love with you.

She stares at your drink

Girls will often look at a guy’s drink when they want them to buy a drink for them.

So, if you are chatting to a girl and you notice that her eyes are focused on your drink, then ask her what if she would like a drink and go and buy it for her.

She removes her clothes

She’s not getting naked in public, but she is starting to remove her clothes one by one. You are in a bar, and she takes her coat off and then her jumper because she is a little hot.

Now you get to see more of her body and that is what she wants.

She looks at you from across the room

Basically, wherever she is, she still manages to catch your eye.

This is her showing you that no matter where she is or who she is talking to, you are her priority.

Girls will often make sure their body language is presentable so that they can attract you.

If you try and sit up straight you will notice that your back curves or arches in the middle.

For many centuries men have found it attractive when girls do this.

She looks over her shoulder

You are grabbing her a drink at the bar, and she looks back over her shoulder at you.

She might give you a slight smile and a seductive look. She is seducing you and girls often use this shoulder trick to attract a guy.

She breaks the touch barrier and puts her hand on your shoulder and on your thigh.

When you tell a funny joke she taps you on the shoulder while she laughs.

She might even grab your hand when you are walking down the street together.

It should be clear at this point that she is secretly falling in love with you and wants the relationship to move on to the next stage. This is when things get more physical.

She does duck lips

I am sure you have seen a picture of a girl doing duck lips. It can look a little ridiculous even I would admit that!

Men, like you do find it attractive though and so women do it. They are trying to look their best in front of you, duck lips and all.

She crosses and uncrosses her legs

If you notice that she is crossing and uncrossing her legs, it might be a sign that she is nervous around you.

It’s not a bad thing that she is nervous because it shows that she likes you.

Try to make her feel more comfortable though by saying something like “I am nervous as well.”

Her knees point in your direction

If a girl is sitting down and her knees are pointing towards you, it is a sign that she likes you and maybe even loves you!

This is something that girls subconsciously do so even though you might pick it up, she probably won’t.

She accidentally brushes against you

Whoops, did I touch you? Have you ever had a girl say that to you when she accidentally brushes against you.

The good news is, she meant to touch you. It might be her way of slowly breaking the touch barrier between you both.

She laughs at your jokes

You might be funny, but you are probably not that funny. If a girl is laughing at all of your jokes then she likes you and is trying to impress you.

She rubs her legs and thighs

This can actually be a sign that she wants to take things further physically.

Girls are far more emotional than men and are less likely to just have sex for the point of having sex.

If she wants to take it to this level then she has developed deep feelings for you.

She pushes up her sleeves

If a girl is wearing a jumper or long sleeve top and she pushes up her sleeves she is trying to draw attention to her wrists.

She plays with her jewelry

She starts fiddling with her earrings or playing with her necklace. She is either hinting that she would like you to buy her another or she is trying to draw attention to the part of the body that it is on.

You pay her a compliment, and she blushes. It’s a sign that she is attracted to you and cares about your opinion.

Normally when we talk about eye contact it is about a woman longingly staring into a man’s eyes.

Sometimes though she will avoid contact because she likes you but is embarrassed or shy.

She wants you to make eye contact with her before she makes it with you.

She strokes her coffee cup

You notice that she is stroking her cup of coffee and you think to yourself, why is she doing that? It’s just because she is nervous around you and needs something to play with.

She licks her lips

If she is drawing attention to her lips and basically saying “kiss me you fool” so what are you waiting for?

She exposes her cleavage

She wears low cut dresses and tops to your date, and you can’t help but notice her cleavage. It’s ok for you to notice because that is what she wants.

She stands as close to you as possible

She is secretly in love with you when she stands as close to you as possible. She just cannot get close enough and she wants you to put your arm around her as reassurance.