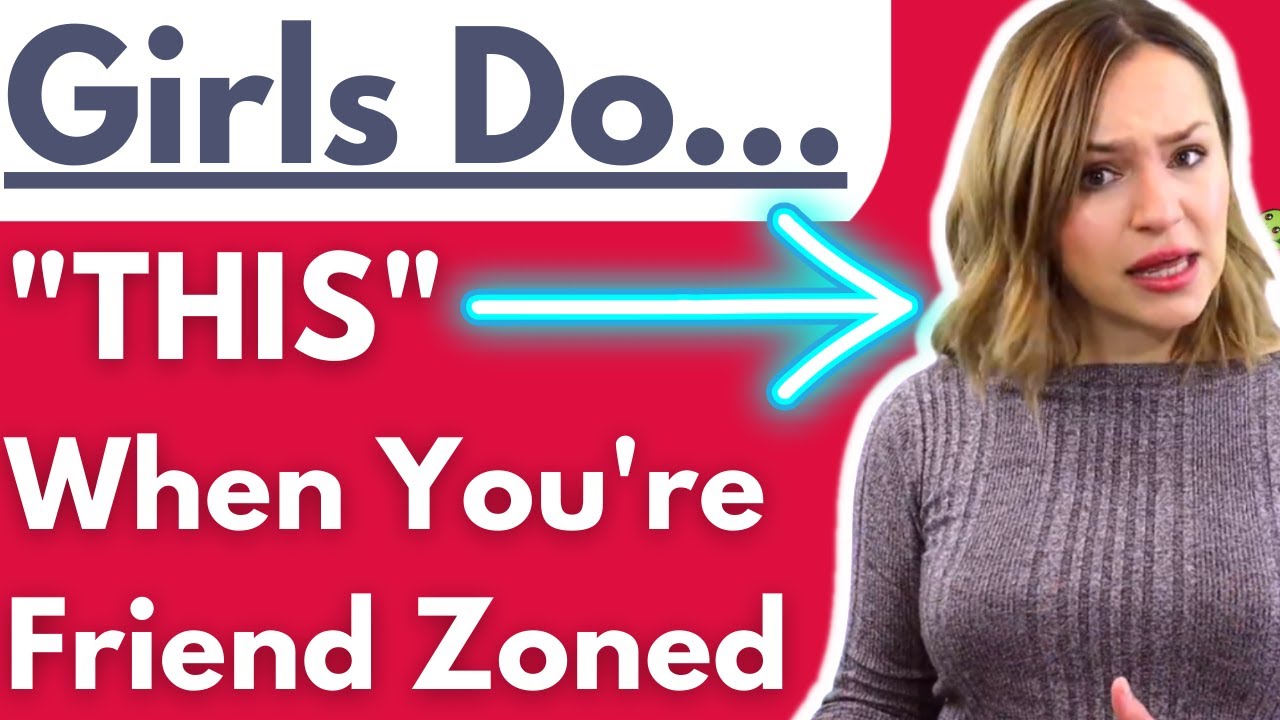 Now I understand that being put in the friend zone sucks! Guys often think that it could never happen to them…until it does.

Often by the time a guy realizes that he has been friendzoned, he has actually been there for longer than he thinks. It might leave you thinking where did I go wrong? Or why did I waste my time?

If you learn what girls do when they friend zone a guy, it could save you so much time.

After all, if you spend a lot of time with a girl only to realize a few months later that she has friendzoned you then you have missed out on so many girls that might have actually been attracted to you.

In today’s video I am going to tell you what girls do when they friendzone a guy. This will help you save time that could be spent with girls who are actually attracted to you.

Signs you’re in the friendzone

She brings her friends with her on dates

You arrange a romantic dinner date, and she turns up with the friends. At the beginning you might trick yourself into believing that she wants you to meet her friends or that she is just very close to them. If this happens at all though, even on the first date, alarm bells should start ringing.

This is not normal behavior, and it shows that she either does not feel safe with you or that she is trying to turn your date into a casual hanging out session.

If a girl really likes you, she will come alone to your dates and enjoy all the romantic time she can get!

She doesn’t dress up for you

She turns up to dates with no make-up on, her hair messy and a tracksuit on.

Basically, she doesn’t make an effort to look nice for you. When you really dress up, she dresses down.

This should be a red flag because if a girl likes a guy, she will always try to look nice for him. It shows that she is not trying to look attractive for you.

She might be trying to turn you away because she does not want to have to communicate how she feels, and she is using how she dresses as a tool to do this.

She rings you for a chat

This is not an easy sign to spot but when considering it think about all of her behavior and if some of it matches up to the other signs.

It’s nice when a girl phones you or messages you. This is one of the signs that a girl is attracted to you. However, it depends on what they are phoning you to talk about.

If a girl phones you, asks about you and flirts a little with you then it is a good sign.

If she phones you to chat or gossip with you though, it might mean that she has friend zoned you. She sees you as an important part of her life but in a friendly way rather than a potential boyfriend way.

She tells you about boys she is attracted to

This should be a major red flag.

If you are both on a date and she starts talking about all the other boys she is dating or a guy she is attracted to, it should be clear that you have been friendzoned.

Girls will only ever do this in front of a guy when they want to make it clear to him that they see him as a friend.

She talks about her ex

She might not realize that she is doing this one. If she has had a recent breakup, she might talk about her ex a lot on dates with you. Obviously, this is not something you want to hear about.

The truth is, she might not be over him. She might have agreed to a date with you because she believed that she was over him. If she is talking about him then she probably is not, and you are her rebound.

Don’t be surprised if she tells you a few weeks after your date that she is back with her ex.

She will share a bed with you and spoon you

When girls first meet a guy and start dating them, they are often really shy. They avoid all touch for a while until they get to know the guy and they certainly won’t sleep in a bed with him until things get serious.

If you have not been dating for very long and she shares a bed with you and spoons you, it might be because she has friend zoned you. Girls will hop into bed and even spoon a guy that they see as a friend.

They don’t see them as someone they really need to impress so they are not as nervous. Also, because they see you as a friend, they do not see it as something that will get intimate.

You have both made the 40-year-old pact

The 40-year-old pact is when two friends agree to marry each other if they have not married anyone else before they turn 40. It’s basically a friend agreeing to marry another friend.

If she were attracted to you then she would never make this pact. She would hope that you would be the person she would marry well before she turns 40.

If she brings this up, recognise it as a red flag.

She gets changed in front of you

This one is similar to the bed sharing sign. It will take a while for a girl to be comfortable enough to change in front of a guy that she is dating. If she starts getting changed in front of you quite early on it’s because she sees you as just a friend.

She comes to you after a breakup

You might not be dating her, but you have feelings for her, and you hope she feels the same way about you.

She has been in a relationship with another guy, so you have been leaving her alone.

Her and her boyfriend end up breaking up and she comes straight to you. It is tempting to see this as a good sign.

She does not come to you for a date though, she comes to talk to you about her ex and their breakup. She cries on your shoulder and treats you like one of her girlfriends.

This shows that she sees you as a friend as opposed to someone she wants to date.

It is important to remember that although she feels like this now, she might not always feel this way. So, if you think you could be a good friend, why not stick around?

She has a pet name for you

She doesn’t call you babe or hun. But she does has a pet name like ‘short stuff’ that she uses.

This is something girls do with their friends and unfortunately you should see it as a friend zone sign.

She tells you that you are like a brother to her

Or that you are the brother she has never had. However, she says it, she is telling you that you are her friend without directly saying it.

It’s safe to say that she never wants to date her brother!

She tells you that you would be perfect for someone else

She spends a lot of her time trying to hook you up with another girl. It could be one of her friends or work colleagues.

When you spend time together, she surprises you by inviting them along and telling you how perfect you would be together.

Maybe she senses that you like her and to avoid hurting you, she is trying to help you find someone else.

She asks you for things

She asks you for things early on. Things like hugging, attention, hair stroking and to give her a back massage. Girls don’t do this with someone they like.

They wait for it all to happen naturally when it is meant to happen. So, if she is asking for these things, she sees you as a guy friend rather than a guy that she wants to date.