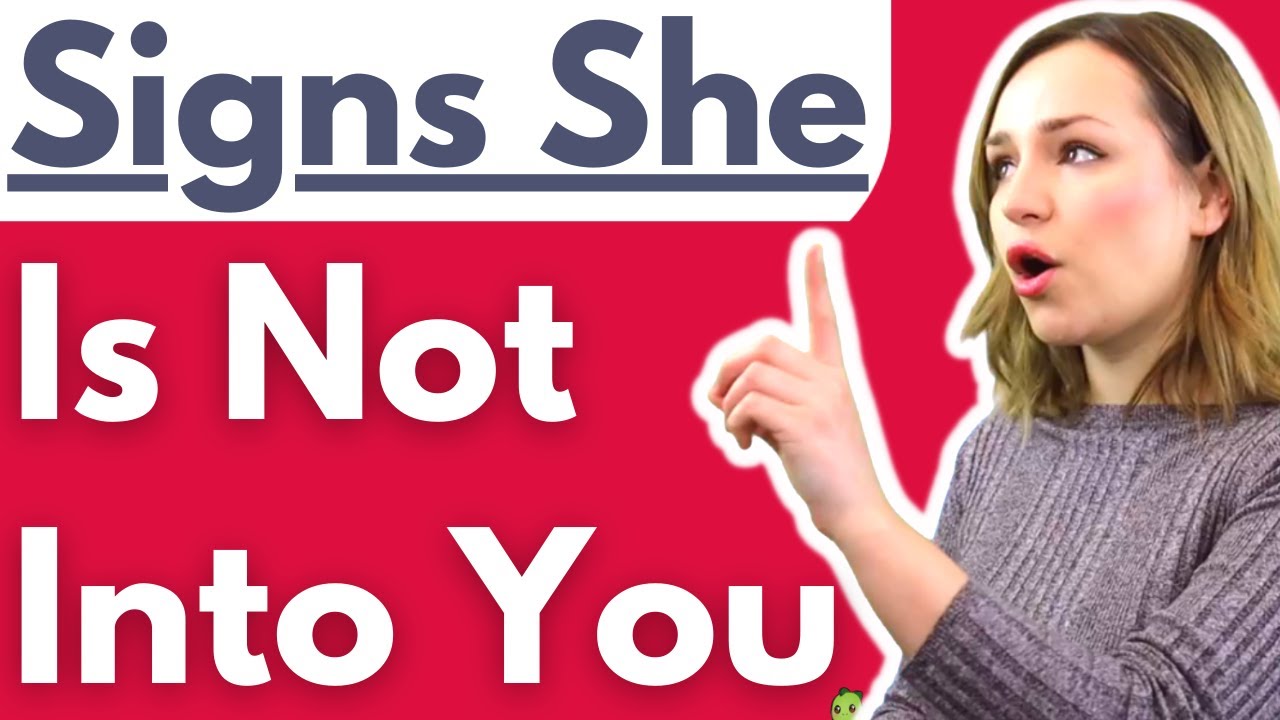 It is never easy to come around to the fact that a girl is not into you. Often it really hurts and it’s something that we would rather avoid right? So, we end up ignoring the signs and keep on trying to win her over.

Now gents do think to themselves that if they plan a big gesture perhaps she will reconsider how she feels. This rarely works though and it’s just a waste of your time.

You are much better off cutting your losses and completely moving off.

But this is the question, how do you know when she is not into you?

Well, there are hidden signs that you can look for which will save you waiting around for her to fall for you when she’s just not interested.

I’m going to explain what these hidden signs are.

Hidden signs she’s not into you

She does not notice you

If you are meeting in a public place or you are with friends, she doesn’t notice you. In fact, she ignores you and talks to everyone else instead of talking to you.

Do not be fooled, she does notice you and she does know that you are there. She is choosing to ignore you because she does not want to speak to you.

Instead of chasing her, leave her be and let her go.

Whenever she messages you, she sends short snappy texts. When you ask her how she is, the response might be “I’m great.”

If a girl is interested in you, she will take the time to send you a nice message. She will want to tell you all about her day and how great it was.

A girl who sends you short texts is secretly saying, I am not interested in talking to you.

She takes ages to reply

Whenever you message her or phone her, you find yourself waiting hours for her to reply. She does not apologize for taking ages to reply and just carries on like nothing has happened.

You might wonder what she has been doing and why she has taken so long to reply? It is most likely because she was with another guy or is just not interested in talking to you.

This can be a hard pill to swallow but it is something you need to come to terms with otherwise you will spend a lot of time waiting around for her to show you some interest.

She looks bored when she is with you

You are talking to her and telling her what you think is an interesting story. Then you notice she looks really bored. Even when you are walking down the street together holding hands, she looks bored.

This is not a great sign, and it should show you how she feels. You don’t want a girl that is bored to be around you!

She straight up puts you in the friendzone.

You might have been dating for a while or even in a long-term relationship and then suddenly she just calls it off and friendzones you.

This hurts but you are better to walk away with your head held high and look like the better man.

She talks about other guys in front of you

This is a really bad sign and one that really proves she is not into you. You are on a date and she starts talking about her ex or a guy she is dating at the moment. This is her trying to subtly tell you that she is not interested.

She cancels dates and makes excuses

She is constantly cancelling dates and making excuses as to why and even cancels on the day of the date which is really rude behavior.

At the beginning you might believe her excuses but after a while you need to come to terms with the fact that she is not interested in you, and she is trying to show you this.

She never seems to be alone

Whenever you try and arrange a time to see her, she is busy or seeing other people. When you do see her, she always brings someone with her. Whether it is her friend, or she invites one of yours.

She is trying to create distance between you both because she is not into you.

She wants to friendzone you which is why she is doing this. This is a sign that she does not really want to date you and that she is not into you.

She does not look her best

No effort is made by her to dress up around you, even when you take her to a nice restaurant. She wears her normal clothes, no make-up and has her hair messy.

Girls dress their best when they want to impress a guy and win him over. So, if she is dressing like this, it is because she doesn’t want to impress you. She does not really care what you think about her, and she might even be trying to put you off.

She never makes a move

Whenever you are together, she never touches you. You find that you have to lean over and touch her.

She also is never the one to ask you on another date. You are always having to plan them for the both of you and ask her to come.

You always end up doing things that she wants you to do. If you suggest anything, she immediately shuts it down.

When you say something like “why don’t we go to the movies” she says, “maybe next time, today I want to go to the beach.” When it comes to eating, the same thing happens. You always end up eating what she wants to eat, and she will never budge.

Compromise is a major part of a healthy relationship so if she is refusing to compromise, it’s a very bad sign.

She subtly rejects you

She laughs and says things like, I would never date you. You might miss it or be laughing along. This is her way of subtly rejecting you.

Another way of doing this is by making fun of you in front of your friends or her friends.

It is not nice behavior and it might actually put you off her. Which is what she wants, because she wants you to break things off so that she does not have to.

She never tells you personal things

This is a red flag and really shows that she is not interested in connecting with you.

In fact, she would probably rather have as little to do with you as possible. Maybe she is too scared to call things off and it might be up to you to do this part.

She never says that you are dating or commits to being called your girlfriend. There always seems to be an excuse as to why she does not want the title.

This is suspicious behavior and unfortunately in all probability spells the end of the road.

When a girl does this, it means she will never commit to you, she is simply wasting your time and hers.

She doesn’t introduce you to her friends

She is most likely planning to break it off with you and does not see the point of introducing you to her friends as you won’t be around much longer. If you ask her when you can meet her friends and she says something vague, dig a little deeper to find out why.

She might use it as the opportunity to break things off which will hurt in the moment but be much better in the long run.

If she tells you that she just is not ready, give her some time but if it goes on for a long time, it is time to move on.