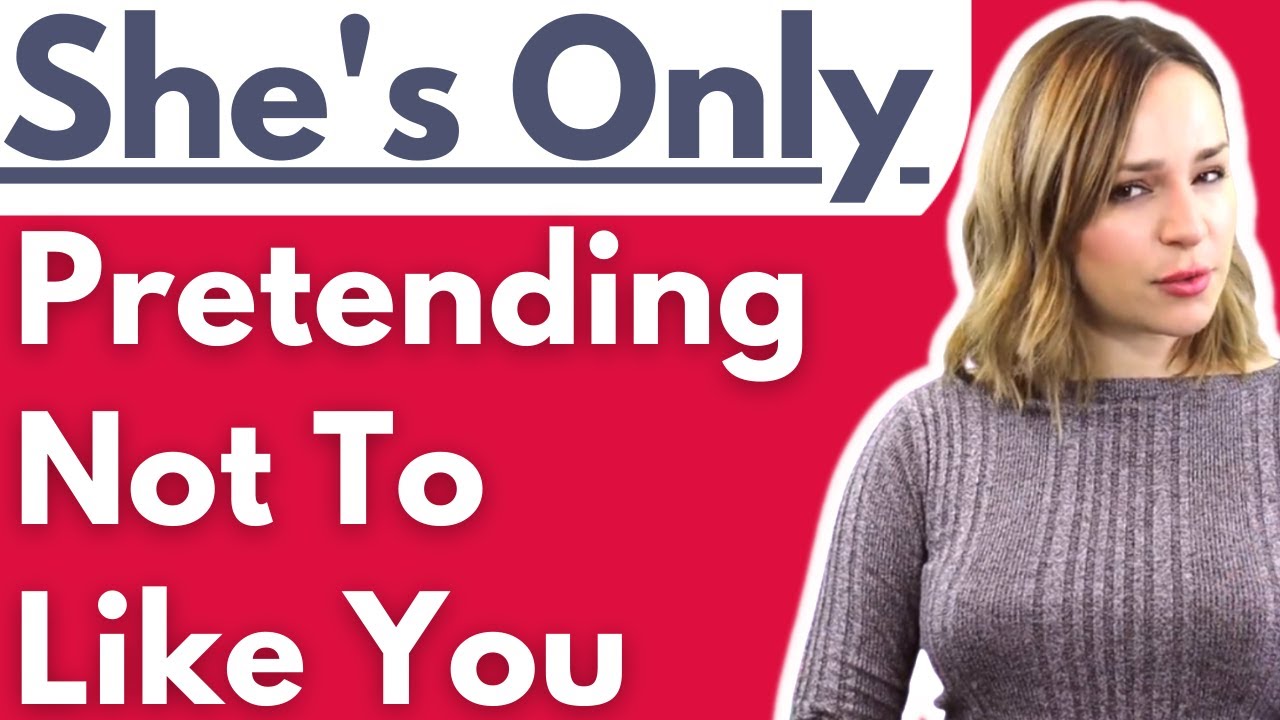 It makes it really difficult for men to know when a girl likes them or not. Sometimes a girl won’t like a man, sometimes she will and sometimes she will pretend she doesn’t when she really does. I did say understanding women could be confusing!

Figuring out if a woman likes you or not is a tough job but sometimes you just need to hear it from a woman’s mouth and then it starts to make sense.

In today’s video I am going to tell you what women do when they are pretending not to like a guy. This information might make you think twice about the women around you and how they really feel about you.

She is constantly talking about you

Her friends and also your friends mention to you that she is constantly talking about you.

When you are not around, she will be talking to the people around her about how great you are.

She might retell stories you have told her or talk about something you did together. You might not have realized how much it even meant to her because she did not really give off any signs.

When a girl is constantly talking about you but not to you it is probably because she is nervous that you don’t feel the same way about her, and she is trying to protect her own feelings.

She teases you and taunts you

Girls will often tease guys when they have feelings for them.

This can be confusing though because it can either come across as mean or as though she has friend zoned you. Girls won’t tease guys that they don’t have feelings for though, so it is a key signal.

They will also taunt you, they might wear clothes that show off their body when they are around you or tell you about all the guys they are dating.

It’s not so much that they are trying to make you jealous and more that they want you to want them.

She keeps bumping into you

Conveniently she keeps bumping into you. Whether it is in the grocery store, in your favorite cafe or when you are out with friends.

Everywhere you turn she seems to be there. The first few times it might seem like a happy coincidence but after a while it’s time for you to realize that it is happening on purpose.

She wants to run into you, to spend time with you and for you to be thinking about her.

She hangs out with your friends

Did she already know your friends? Or is she suddenly close to them?

Becoming friends with a crush’s friends is a great way to spend more time with them and get to know more about them.

She is also probably hoping that they talk to you about how amazing she is. This is how a lot of relationships start.

She blushes when she sees you

Next time you see her, take a closer look at how she reacts.

Does she blush or look flustered? She might be acting as though you are just friends or ignoring you, but her body will give her away. Girls blush when they see a guy that they really like or when he does something like pay her a compliment.

It can also happen when she is embarrassed about something. If a woman is blushing when she sees you, it is a sign that she likes you even if she has not told you that yet.

You catch her stealing glances at you

When you are sitting across the bar from her, you notice that she is looking at you quickly and then looking away. She is trying to get a closer look at you.

Although you have noticed, she does not necessarily want your attention, she just wants to study you a little bit. She might be checking to see if you are talking to other girls and what kind of mood you seem to be in.

You’ve overheard her telling her friends that she likes you

If you hear her saying things to her friends like, he is so good looking, or I like him then it’s safe to say that she likes you.

Girls will often tell their friends first that they like you especially if she is pretending she doesn’t like you in front of you. She is probably really nervous about how you would react and whether you would like her back.

That is why she is hiding it and telling her friends instead of you. If you overhear her saying something to someone else though, it’s time to act on it or tell her that you see her more as a friend if that is the case.

Her friends encourage you to talk to her

Girls’ friends will often say or do things that the girl wishes she could do instead. She might be too nervous to talk to you and so her friends step in and do it instead.

This can be confusing for a guy because it feels like a setup, but it is always worth talking to her and seeing if you like her back.

She mentions other guys she is dating

When you do talk to her, she mentions other guys she is dating. If she does this in a way that is not just to taunt you, she is probably trying to make you jealous.

She might be wanting you to make the first move, and this is her way of hurrying you up. Another reason could be that she thinks you do not like her and so she wants to show you that other guys do.

Girls do this type of thing for all sorts of reasons but if she is going to the trouble of telling you about other guys, it probably means that she has feelings for you.

She acts nervous when she is around you

She fidgets, looks down at the ground and speaks in a quiet voice. These are all signs that she is nervous when she is around you.

This is why she is pretending not to like you even though she does. She is worried about how you would react if she made her move.

Colleagues mention her to you

Often the people we work with pick up on things before we do.

If your colleagues start mentioning her and how great she is, it might be because they have picked up on the fact that there could be something going on between you both.

She gets frustrated when you don’t pay her attention

Even though she has not told you she likes you, she gets frustrated when you don’t pay her the attention she thinks she deserves. When it gets to this point, one of you has to make a move. Once you do, it means you will start spending more time together and she won’t need to get frustrated at you.

Her body language gives her away

She is all over you and her body language is giving it away. She is giving you all the signals of someone who likes another person.

Flicking her hair, looking at you straight in the eye, moving her head to the side when you speak, pushing her chest out and uncrossing her legs.

These are all signs that she is open and comfortable around you and is trying to attract you.

There is sexual tension between you both

You can feel the sexual tension, so can she and so can the people around you. Neither of you are acknowledging it but it’s there.

She always wants to spend time with you

Whenever you invite her to spend time with you, she jumps at the chance. It seems as though she cannot get enough of you, and she would drop anything to hang out with you.

This is not something that girls do unless they like a guy. So, if you are questioning her feelings, this should make them crystal clear.

If anyone asks her if she has a crush on you, she blushes. Especially if she is near you! Even if she says, “no I don’t,” her body is giving her away without her even realizing it.

Like we said at the start of the video, figuring out if a woman likes you or not is a tough job and hopefully today’s video gave you some insight into what to focus your attention on to be sure she does like you.