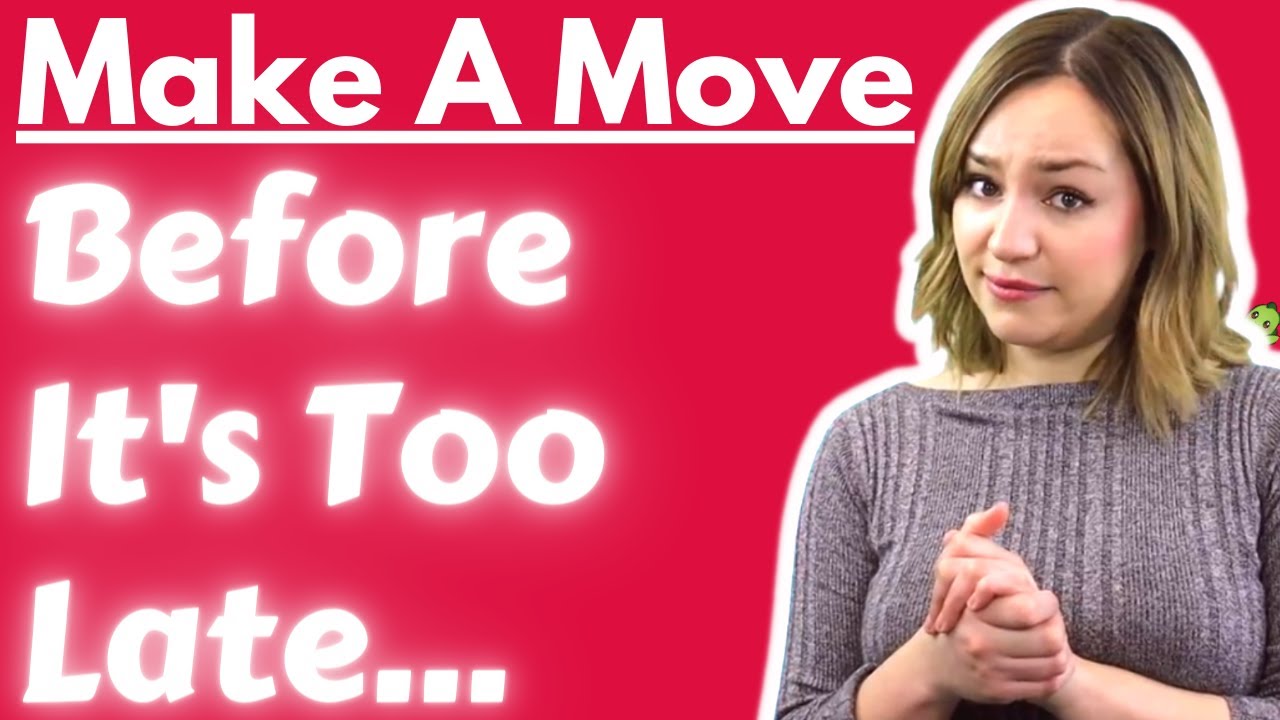 By looking out for the signs she’s waiting for you to make a move, you can have a much better idea of how she feels about you and if she wants a relationship or not.

Are you wondering when you should make your move on a girl? You may have met a special lady at a bar a few weeks ago, your eyes met across the room and you felt that instant connection. You think that maybe she felt that connection too but you’re not 100% sure just yet.

Well, the truth is she is probably dropping lots of signs left, right and centre to show you that she wants you to make a move.

Now this is important, you do not want to miss the chance to make your move because you took so long. And you definitely don’t want to be left thinking “what if I just only did this”. Which is why it’s helpful to know the signs that you need to be looking out for.

In today’s video I’m going to tell you the 15 signs that you must look for if you are questioning whether or not to make a move on a girl.

Signs She Wants You To Make A Move

She has walked up to you when you are alone

If you notice that when you are standing alone in a room or outside, she walks up to you, this tells you two things.

Firstly, it shows that she likes you enough to approach you. Especially when you are alone because it makes her more vulnerable.

Secondly, her approaching you brings her to the forefront of your attention. Which is something she wants because she wants you to make your move.

It takes a lot for a girl to pluck up the courage to approach a guy especially when he is alone.

She is messaging you late at night

You start receiving texts from her early in the morning, at lunchtime and late at night.

She wants to talk to you if she is messaging you which is a very good sign. Especially if she is texting you late at night, it shows that she is thinking about you then.

Normally we think about deeper topics of things we care about late at night and they can even keep us awake.

No one spends time messaging someone late at night or first thing in the morning unless they care about that person.

So, take it as a sign to make your move.

She has already told her friends about you

You have only just met, and she has already told her friends about you!

She might mention this in a really casual way because she doesn’t want you to think that she is too serious. She might say something like “My friend Julie asked what you do as a job?.”

You might not notice this at first, but she wants you to know that she has told her friend Julie about you which means she likes you.

Girls don’t typically tell their friends about a guy until they have at least been on a date, but sometimes if they instantly like a guy, they will mention him.

Once her friends know, the next step is dating and eventually a relationship. In her eyes so it’s your chance to make your move.

She is flirting back when you flirt

If you start flirting with her and she flirts back then it’s a sign that you can comfortably make your move.

Girls only flirt with guys that they are interested in and that they like. So, if you are unsure whether or not you should make your move then flirt a little and see how she reacts.

If she starts flirting back or looks hot under the collar, it’s a good sign and it’s time for you to turn the heat up.

She is acting warmly towards you

What I mean by this is that she is being warm towards you and not cold.

You can tell when a girl is cold, she might not be smiling, laughing at your jokes, or talking very much. This shows you that she is not interested, and she most likely wants out of the situation.

You should close down the conversation and move on.

If a girl is highly engaged in everything you are saying and can’t stop smiling and laughing then she most likely has a crush on you.

You have both met briefly and afterwards she is the one who reaches out and makes contact.

She might message you on social media or simply bump into you on the street. Either way she is the one to make the first move that shows she is really keen and very interested in you.

This is normally something that girls want guys to do so if she does do it then it shows she is really making an effort.

She re-adjusts how she looks when you are near

As you approach her you notice her flicking her hair back and smoothing it down. She also adjusts her dress and looks down at her outfit. All while smiling at you and looking straight at you.

This one is simple. She wants to look her best for you which probably means that she likes you.

So why not make your move, what do you have to lose?

She is using body language to show you

We know when someone is angry, annoyed, happy, excited, and so much more.

It just is something that comes naturally which is why it’s important that you study her body language.

If it is open, then she is most likely interested in you and she wants you to make your move. She wants to see what you think before she puts herself out there anymore.

When you speak, she is looking you directly in the eye.

She is also nodding and asking you questions. This all shows that she is engaged and interested in what you have to say, she thinks you are truly knowledgeable, and she can’t get enough.

Make sure you look her straight in the eye as well to show her that you are interested.

She smiles when she is around you

You can tell that she wants you to make a move because every time you are together she has a huge smile on her face.

You can say anything, and it makes her smile. She will also be smiling every time you send her a message or phone her.

She has a crush on you and it’s making her really happy.

She invites you on errands

We all have to do errands. From picking up groceries to going to fill up our cars with petrol, it’s just something we have to do as adults. So, if she invites you on errands with her then it shows that she really wants to spend time with you.

If a girl comes up with an errand to take you on, it’s clear that she will find an excuse to spend time with you.

As she is laughing she brushes your arm or puts her hand on your leg.

Once a girl breaks the touch barrier, she is pretty serious about you.

A girl has to be pretty brave to take this step before a man so if she does this, you know that you can make your move when you are ready.

She will want you to also touch her so that she knows that you feel the same way. So, make sure to touch her back while you both laugh or her thigh.

She initiates a date

She invites you on a date or suggests one before you. If she does this then she has pretty much beat you to making a move.

She gets nervous when she is around you

You notice that she starts twirling her hair or stuttering her words when she is around you.

This is because she is nervous when she is around you. It’s not that you make her uncomfortable, it’s just that she likes you so much that she does not want to mess up.

You can put her at ease by saying something like ‘I am nervous as well.’

She tells you that she has been thinking about you

If a girl does this, you can immediately make a move without even thinking about it.

She might mention that she was thinking about you this morning or last night.

She likes you and she wants you to take the relationship to the next step.