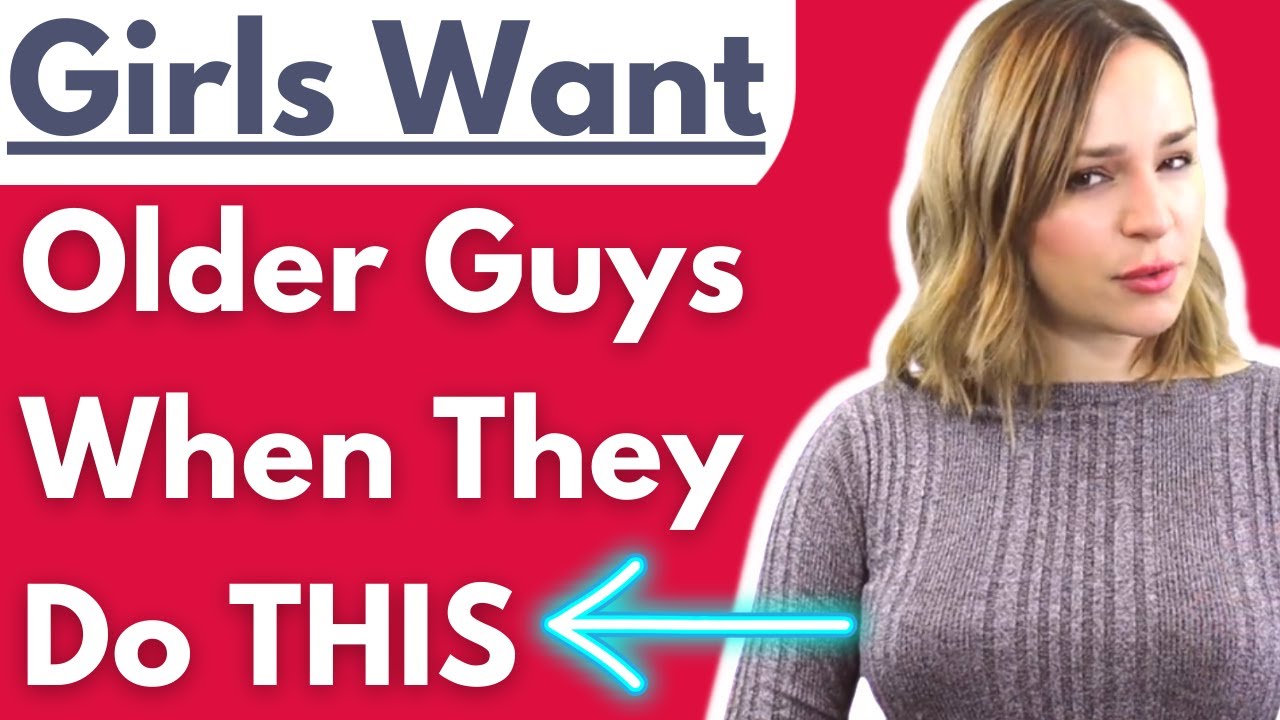 Older men and younger women make a good match. When people hear the term ‘older man’ they often think of a man that is very old and is looking for a much younger lady.

Sometimes though an older man might only be 1 or 2 years older than his younger woman. That means that a lot of men can be older men even if they would not consider themselves to be, which also means that today’s video will be useful to a lot of you!

I am going to be sharing some tips today that will help older men seduce younger women.

If you are thinking of trying your luck with a younger woman, watch this video first!

How to seduce younger women

It’s true, being a gentleman never goes out of fashion.

Women value men who are gentlemen even more now because so many simply are not. It’s not something you need to learn how to do, you probably already know.

It’s doing things like hanging up her coat, opening the door for her, pulling out her seat and asking her about herself. Girls love that older guys typically do this more than a younger guy would.

She is a young woman which means her life is not very stable. She is probably experiencing all sorts of emotions plus she is busy figuring out what life is…remember what that was like?

She needs you, her older guy, to be her rock! To be there for her when she needs you, to offer her advice and to give her the space to express her emotions.

You are older and more mature which means this is your time to shine. You can tell her that she will get through this period of her life, and it will get better!

Be prepared for change

When you date a younger woman, your life will change. It’s inevitable and you have to be willing to accept that.

She will be living a completely different life to you. Partying all the time, spending a lot of time with friends, working multiple jobs and enjoying her hobbies.

It’s not all about her and what she wants but you do need to be able to change and adapt.

You are committing to changing up your lifestyle but if you have sought out a younger woman to date then you probably saw this coming.

Don’t give her all your time

You are busy and so is she. Older men sometimes make the mistake of thinking that younger women require them to be around all the time. It’s not true.

Younger women love to spend time independently and doing other things that are also important to them. They don’t want to hang around with the man they are dating all the time.

Looking desperate is not a great look and it is something that you want to avoid. So, from the very beginning try to not give her all your time. Make yourself busy with your own life, career, friends and family. Make time for her, but don’t be available all the time.

She will like you more and be more easily seduced if you make her work for it.

Not physically but figuratively! If a younger woman seems to lose interest, then let her, but leave the door open for her to return if she wants to.

It might just not have been the right time for her, and she might have needed to evaluate what she wants and who she wants to date.

That’s why it is important to always end on a positive note and stay in touch.

A girl will really value this maturity from an older guy which is something she would never get with a younger guy.

Let her be independent

Younger women often date older men because they don’t want to be as serious as they might need to be with a younger man.

They want to maintain their independence and live the fun life they do when they are single (minus the dating other guys!).

Although you might want her to be on your couch watching TV on a Friday night she might want to be out with her friends.

Allow her to have this freedom and she is far more likely to want to be seduced by you.

Older men can sometimes be labeled as creepy. This isn’t always fair, but sometimes it is because they stalk younger women and follow them around.

It’s important to remember that these tactics don’t work and won’t get you to the point where you are seducing a younger woman. They are just like any other woman, if you want things to go further then you should talk to them, connect with them and flirt with them.

If they are interested, they will signal that they are and if they are not, leave them be.

Show her that you can have control

A woman does not want to be controlled by a man, but a younger woman is looking for an older guy that has some control.

You can show her this side of you by choosing where you go for dinner or telling her a story about when you had to take charge at work.

These are harmless ways of showing her that you have control and are able to make decisions easily.

Younger women often love the power that older men have, so show her this.

Younger girls want an older man who can be playful.

This does not mean you need to act differently or younger than you really are. If you are dating a younger woman then you probably want someone who has more energy.

You need to be able to match this so that she does not get bored. You could arrange a date on the beach or at a rope climbing course.

Do things that you will both find fun and make sure that you just focus on having a great time.

Allow her to bring out your fun, playful side and you will both love spending time together.

It can be tempting as an older man to try and act younger to win over the younger woman. If she wanted someone who acted like this though she would date a younger man.

She wants to date you because of your age and how you act. She would much rather you be your mature self then try and keep up with people her age.

Introduce her to the more mature things that you enjoy and see how she reacts.

Act differently from her friends

A younger woman’s friends are probably into snapchatting, Instagramming, and partying. Try to be different from them.

Be more mature and show her how you are different. Take her to do different things like visit museums or take her shopping.

After you have been dating for a while, you could even take her on a nice holiday.

These are things that she is unlikely to do with her young friends and will make her really treasure her time with you.  If you are different from her friends, she will want to spend time with you so they can have a different experience.

Remember that a relationship is never one way.

She has to impress you as well because you both have to like each other.

The more you can relax around her and be yourself the more likely she is to be impressed by you.

When you relax around her, you will also come across as more confident which is something younger women look for in older men.

Younger men are known for turning up for dates in tracksuits. If a woman is dating an older man, then she wants to see your style.

Make sure to always dress nicely for dates and impress her with your fashion choices. A younger woman will go crazy for an older man in a suit.