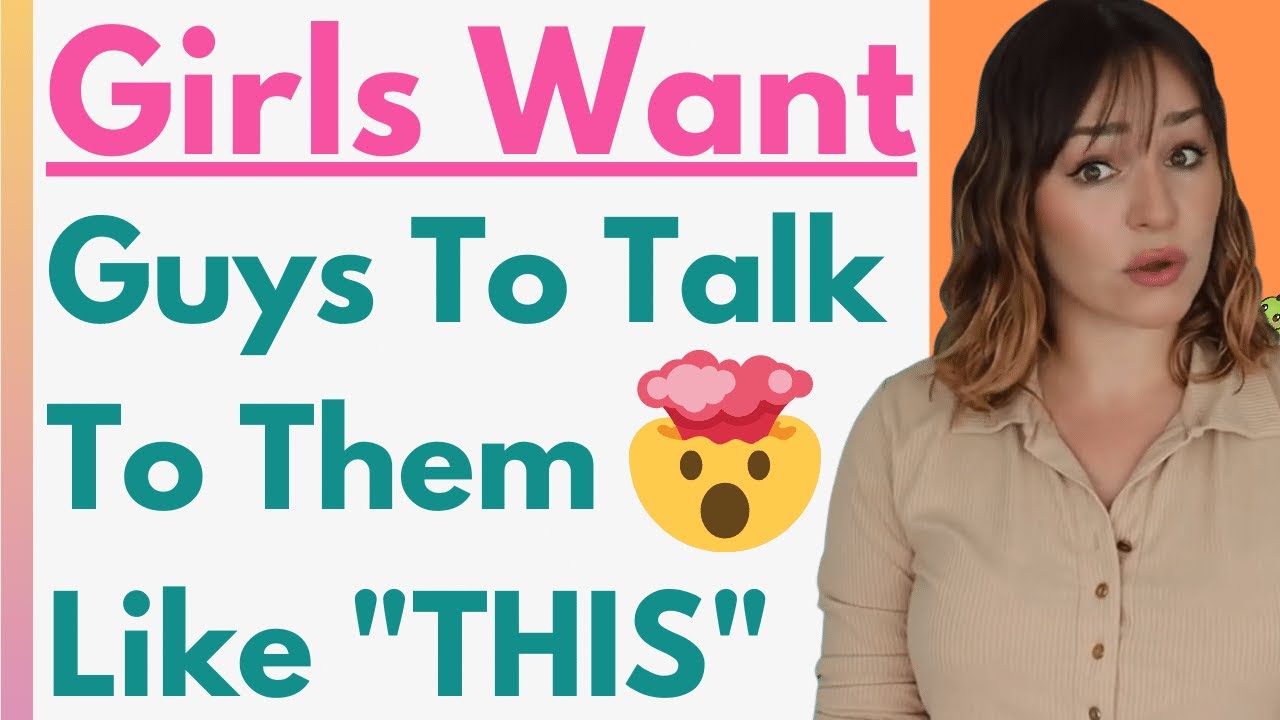 Here is the question of the day, do you think you know how girls want to be talked to? Women and men are not complete opposites but they’re not exactly the same. Girls are more emotional than guys on average and this changes how they want to be spoken to. They will prefer those deeper conversations instead of chatting about sports, for example.

How girls want you to talk to them

Girls want you to tell jokes

Girls love guys that are funny, look at Pete Davidson. If you can make a girl laugh, then you are already winning. Women definitely do not want guys who take themselves too seriously. They do like deep conversations but they also like light conversations that simply flow. You need to strike a balance between both. You don’t need to prepare jokes, it will seem rehearsed. Just show off your natural sense of humour.

When you first talk to a girl, you need to find common ground as quickly as possible. It will make the whole conversation way easier because you will have more to talk about. Maybe you both grew up close to the same town? Or do you both love a certain video game? You will need to ask good questions to get good answers but once you find this common ground, it’s much easier to bond.

Girls want you to notice details

Men are not typically detailed oriented although of course, some men are. Whereas women seem to have much better attention to detail. It might be because they are so detailed oriented that they appreciate it when men notice details. For example, maybe they mentioned that they love Dairy Milk chocolate and you turn up to your next date with a block. They will be seriously impressed that you picked up on that detail and remembered it. It’s brownie points yes but it goes beyond that because she will be more engaged in conversation with you because she knows you are listening.

This is a really easy conversation topic and you probably will have heard of the movie or show they like and if not, well you can learn something new. We are often quite passionate about things we like. So if you ask her, she will run away with the conversation telling you about why she loves that movie or TV show, asking if you have seen it? And if so what do you think of it? It opens up conversation doors sure but it also gives you more of an insight into who she is.

Girls want you to ask about their passions

Of course, girls are passionate about more than just TV shows and movies. They have careers they want to talk about, hobbies, sports and interests. They might have political causes or charities that they are passionate about. It could be anything. They want you to take an interest and ask about them. They also want to hear about your passions so they will probably ask you about yours after.

Girls want you to pay attention

Keep your eyes on the prize, girls hate it when men’s eyes are wandering around the room instead of looking at them while they are speaking. They want you to pay close attention to them and what they are saying. Basically, they want you to make them feel like the most important people in the room. The best way to do this is to pay close attention to them. Give them all of your focus while you are with them, you can daydream once you get home.

Girls want you to introduce them to people

It’s very awkward when you are walking down the street with a girl you are dating and you bump into someone you know. You get swept up in talking to them and forget to introduce your girl. Honestly, this is the worst and it can put girls off you completely. It makes them feel like you are embarrassed by them. So, what is the first thing you should do when you bump into a friend? Introduce the girl you are with!

Girls want to talk about mundane things with you

Girls want you to be yourself

There are a million and one dating tips and tricks. They are all helpful but the most important trick of all is simply to be yourself. You really need to focus on being the best version of yourself you can be. This might mean putting a pause on dating for a while so that you can work on yourself first. Or maybe you are already sure of yourself, then you just need to show her who you really are on the first date. She is not falling in love with the tricks you have up your sleeve, she is falling in love with you.

Girls want you to let them talk

This is something that girls really hate. When men mansplain things to them, it drives them wild. Mansplaining is when a man explains something that is simple in a way that makes you feel stupid. You might not even mean to do it but it really puts a girl off. For example, my friend knew a man who mansplained how to change a light bulb. Now fair enough, he may have thought she wouldn’t know how to do it but it was more the way he told me that was rude. He spoke slowly and only using simple words. It made her feel really silly which was not nice at all. Try to avoid this if you can guys.

Girls don’t want you to talk about your ex

There is no need to bring up your ex-girlfriend. Especially on your first date. There are so many other things to talk about, you can avoid this topic and should. If you bring up your ex she might think that you are still in love with her. Stay away from this.

Girls don’t want you to flirt too much

Flirting is important and it proves that your relationship is more than a friendship. If you over-flirt though a girl might feel as though you only want her for sex. Tone down the flirting, flirt when it is suitable and avoid it when you are just having a casual conversation. Don’t turn everything into a sexual joke as well. When it comes to flirting, be a gentleman.