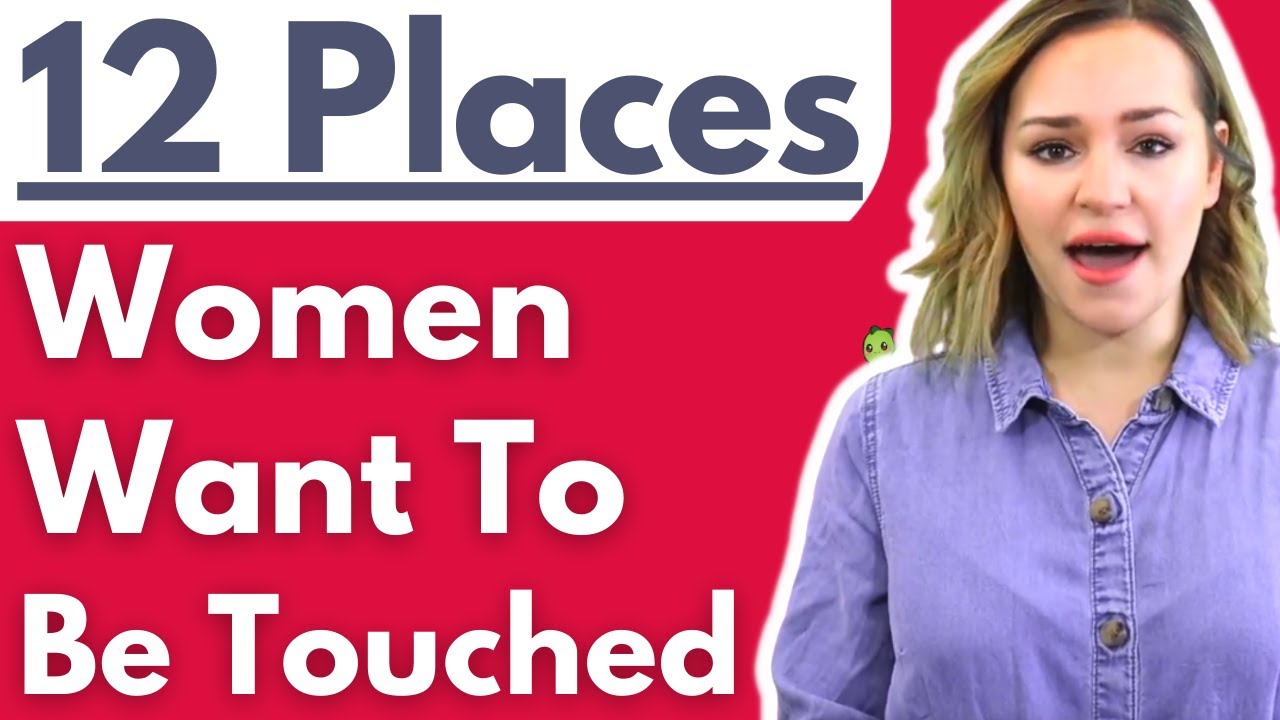 Touch is one of the main ways to connect and communicate with someone, the other is with words.

Now touch allows you to really connect to a woman and research shows that men have a lot more luck with women when they understand how and where they should touch her.

Men often think it is easy to know how to touch a woman, but it is an art, and a lot more complicated than men think. Women after all are all different to men and this means that they like different things.

Now women are typically kinesthetic in nature. This means that their tactile perception prevails over vision, hearing, and other senses.

The female body has a larger amount of receptors compared to a man. This is because of a zone of the woman’s body called the erogenous zone.

Women know that they are much more sensitive to touch compared to men. This is why, on average, they touch these areas six more times a day than a man would.

I’m going to tell you about when you should touch a woman and the 12 places women want to be touched by you, so that you can master the art of touch.

How to Touch a Woman

Knowing when to touch a women

It is important to start with this because if you do not know when to touch a woman, it does not matter where you touch her, it won’t do anything.

Women do have more receptors in their body compared to men which means they are more sensitive to touch. These receptors only work through when they want to be touched.

If a woman is giving you all the signs that she is interested, then she probably is open to being touched by you.

If she is not interested though, then she does not want to be touched.

Women like being asked if a man can touch them first.

You can do this by saying something like, can I hold your hand? This is called breaking the touch barrier, but it should only happen if the woman also wants it to happen.

Women love nothing more than a man running his fingers through her hair. It is hard to explain why we like it so much, but it makes us feel safe and loved.

It’s something you can do while you are watching a tv show or sitting waiting for coffee.

It’s a small thing and you might think, she won’t even notice. Little do you know that she will notice, and it will give her butterflies in her stomach.

A woman’s scalp is very receptive to touch. It can make her shiver when someone touches it or massages it. Then she will feel instantly relaxed.

It’s a great thing to do when she feels nervous about something or is looking stressed. She will really appreciate it and it shows her how much you care about her.

Ears are very sensitive to touch. Both men and women like having their ears touched and kissed.

Ears are both a sexual touch receptor and an emotional one so you can’t go to wrong by touching them.

I am sure you know that the neck is highly sensitive to touch.

This is often read about in books or seen in movies. Women love it when a guy kisses their neck or runs his hands across the back of her neck.

It is normally a sexual touch receptor, but it can make some ladies feel safe. If you are wanting to touch a lady in the bedroom though, the neck is a great place to start.

Women really enjoy their upper back being touched and massaged. You could grab massage oil and offer to give her a massage, you could even make a date night out of it!

You could just surprise her by rubbing your hand up her back. It is definitely a relaxing touch point, but you never know where a massage might lead.

Plus, this area of the body is something they cannot reach and touch themselves so it will feel even better.

Arms are probably one of the most touched areas. They can touch their arms themselves of course but also it is normally the first place that guys touch.

Men might touch women’s arms while talking to them on the first date so it is normally a spot that you would touch early on.

Girls really love it when a guy holds their hand. It makes them feel safe and liked.

There is no better feeling for a girl than walking down the street and holding a guy’s hand.

Hands are also very sensitive to touch though which can be used in a man’s favor. You could massage her hands or touch them softly when you are getting a little bit closer.

Woman’s wrists have often been thought of as a sexual, sacred part of their body.

Touching them can actually feel really good and they are one of their touch receptors so why not give it a go?

Just try not to grab their wrists unless that is something they like.

Lips are another place you can touch and kiss.

It is an obvious place but so often it is not touched enough and forgotten about. Kissing is one way to do it, but the other way is to place your fingers near their lips.

This is something you could touch when you and a woman are getting close and becoming intimate.

Girls enjoy it when guys touch their inner thighs, and it is a sexual place to touch.

If you are wanting to get a girl in the mood, then try touching her inner thigh while you are getting close and see what happens.

Who would have thought that a woman’s knees would be a place she would like to be touched?

Women are more emotional than men and often need this additional support through touch if they are dating a guy.

Women love it when a man grabs them by the waist. It is one of the parts of a woman’s body that is different to a man’s.

It’s often the smallest part of a woman’s main trunk and that is why they like it when a man grabs and appreciates it.

Often a woman will wear a dress or even a t-shirt and a skirt that accentuates their waist. This is to encourage a man to grab their waist or to simply appreciate it.

This one is an interesting one. No one really loves their face being touched especially if it is by someone that they are not really comfortable or close with.

To touch a woman’s face and it be received well, you need to know her and be serious with her.

You could start by touching her cheek before touching any other part of her face. If she lets you touch her face, it is a sign of trust and that she really likes you.

Some of these spots you might have already known about, whereas others might have come as quite a surprise. Now that you know the 12 places women want to be touched, you can try these spots out yourself and see how the lady reacts.