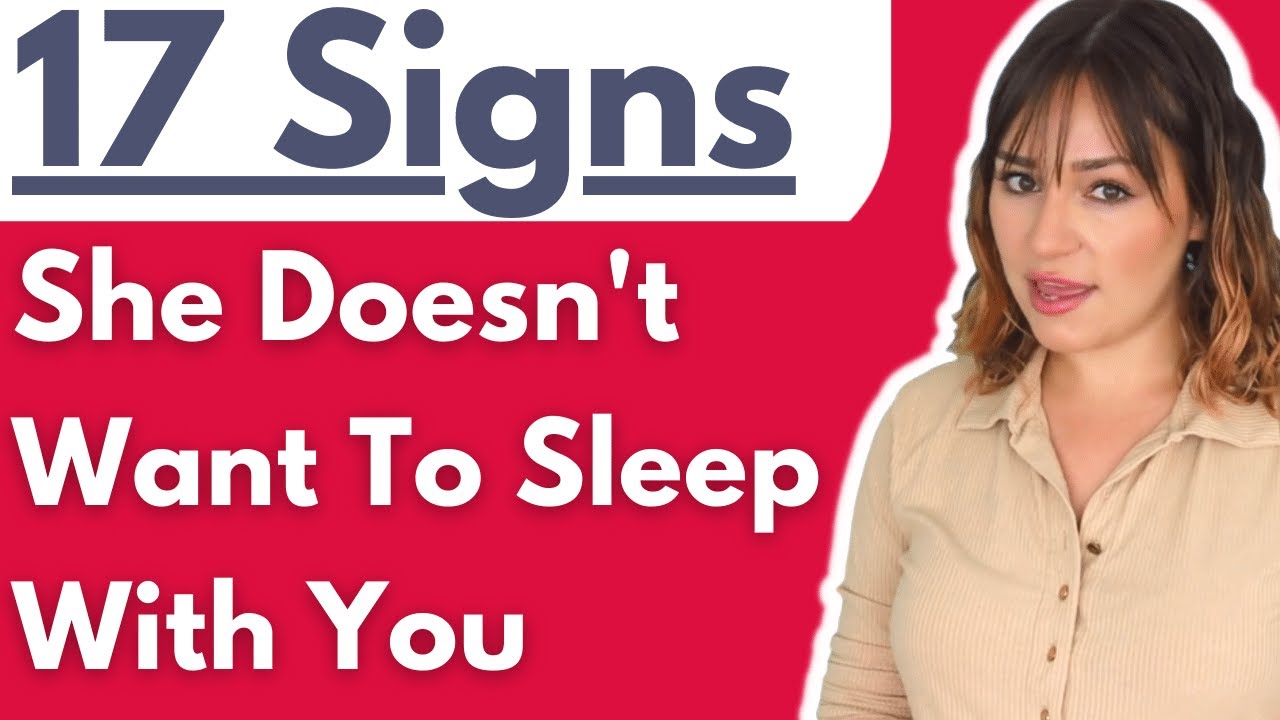 Everyone wants to feel wanted by their partner or someone that they are dating and it hurts when a girl does not want to sleep with you, but it’s better to recognize it than continuing to pursue her.

If your girl is acting funny or giving you the cold shoulder it might be because she’s just not interested in the physical side of the relationship anymore.

This will be a hard pill for you to swallow but it’s better to understand these signs as soon as possible.

So in today’s video I’m going to be telling you about the 17 signs that she does not want to sleep with you.

Signs she doesn’t want to sleep with you

She always has an excuse

At this point you start to question whether she really wants to sleep with you. She probably does not want to, otherwise she would stop making excuses.

She doesn’t react to your body language

When you start getting close and giving off strong body language and she does not react, it is not a good sign.

If you start putting your arm around her and moving in close and she tries to move away, she probably does not want to be getting sexual with you.

She criticizes the way you look

It is not nice if someone is mean about the way you look. It hurts even more when it is a girl that you are dating or in a relationship with.

If she starts picking on how you look, then it is probably less about you and is more about the fact that she does not want to sleep with you.

She rejects all your advances

If you have been on a few dates and have reached the place when it’s time to start making advances, it’s the time to see how she reacts.

She will either accept your advances and give her consent for you to continue or she will reject them.

If she rejects them, it is a sure sign that she is not interested in you. It is time for you to move on.

You feel something is “off” with her

She just doesn’t seem like herself and something seems off.

She is quiet and does not seem interested in anything you are saying.

This is a sign that she is not interested or attracted to you. She is using silence to show you this.

Her body language is closed

She is displaying closed off body language when she is around you.

Her arms are closed, and she is crossing her legs. She has her eyes down and is not looking at you. This is a sign that she is either nervous or that she does not want to sleep with you.

She might like you in general but just does not want to sleep with you at that moment. It is better to leave her alone for a few days and then check back in to see how she is feeling.

She makes zero effort in the bedroom

When you do get her into the bedroom, she puts no effort in to make it any better or more enjoyable for the both of you. She doesn’t like to kiss you and wants to just get it over and done with.

This is what girls do sometimes when they do not want to sleep with you, but they want to try and make you happy.

She might have something go on in her life that makes it so she does not want to have sex with you. Try to focus on other parts of your relationship during this time.

She talks about other guys

If she mentions that she is dating other guys or sleeping with them. It is probably because she does not want to sleep with you.

She might not even be sleeping with other guys, but she just wants you to think that she is. Take this as a sign that she is not keen and move on.

Notice how she talks about male characters on the tv, does she say something along the lines of he is gorgeous. Any form of suggestion that she finds someone else attractive, yet she doesn’t give you any attention, is not a good sign.

Despite what you think, she is fully aware that she is giving you the cold shoulder. She is hoping you take the hint that she is not interested, her mind has wandered off elsewhere.

Her eyes tell a story

You can tell a lot from a girl’s eyes, and they often tell you what she is really thinking.

Her eyes might be looking down or constantly around the room instead of focusing on you.

This shows that she is avoiding something, and it might be having to answer whether you will both sleep together or not.

You always have to initiate

Whenever you do have sex together it is because you initiated it. She never makes the move which can make you feel as though she is not interested in you at all.

This can really damage your relationship and it is better to communicate with her and tell her how you feel early.

If you let it go on for too long, you might find yourself growing resentful.

She would rather satisfy herself

When it comes to the sex part, she would rather do it herself then have you do it for her. This might be because she has needs which are not being met.

You should have an open conversation with her so that you can see what she wants and needs from you. This should help improve your sex life.

She always goes to bed before you

Instead of staying up and spending time with you, she goes to bed early. She worries that you are going to try and initiate sex. An easy way for her to avoid it is to go to bed so that she does not have to speak to you.

This is not a good sign because it shows that there are likely to be other problems in your relationship that need to be resolved.

She changes the subject

Whenever you mention activities in the bedroom, she quickly changes the subject. She would rather talk about anything else which is normally not a sign of a good sex life.

She eyes up other men in front of you

When you are out together, you catch her looking at other guys. When a waiter comes over, she looks him up and down and even flirts with him a little.

This goes beyond her wanting to simply not sleep with you. She probably does not have the same attraction towards you that you do for her.

She never wants to get physical. She avoids it and she avoids being in a situation where she has to do it with you.

She will come up with any excuse and whenever you move close to her, she will move away from you.

This is strong body language, and it shows that she is not interested in sleeping with you.

If you are in a relationship, you can try and work out your problems in counselling. Or you can decide to go your separate ways.

If you are just dating, it is easier to call things off and both find someone who you have a sexual spark with.

If a girl tells you that she does not want to sleep with you. You should understand pretty quickly what she means.

It is better not to react to this badly and instead try and stay friends with her.

Over time you might be able to get close with her again but if you end it badly, you will never get that chance.

If she puts you in the friendzone then she wants to take the sex out of your relationship.

She might wish to just be friends with you, or she might want to distance herself from you altogether.

Friendzoning might not feel good when it happens to you, but it is a definite sign that proves she does not want to sleep with you.