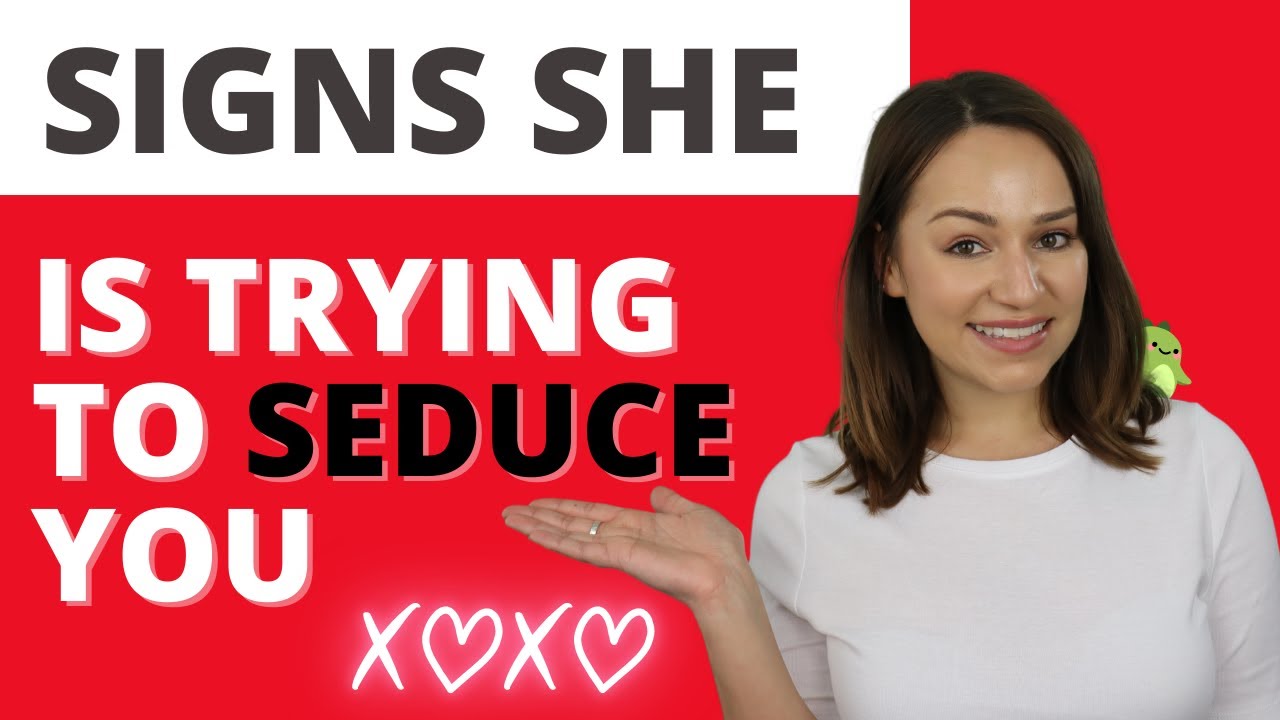 Maybe you are dating a girl, or you have a girlfriend. Well then you probably don’t want to be seduced. The bad news is girls find men that are in relationships even more attractive than men who are single.

It can be hard to avoid the temptation of seduction, it takes a lot of willpower.

To be able to avoid it though, you need to know the signs that show you someone is seducing you. Only then can you foil their plan and make your escape.

Of course, you might want to be seduced. That’s also when these signs are useful because then you know whether a girl wants you or not.

Signs Someone Is Trying To Seduce You

In today’s video I will reveal the signs that someone is trying to seduce you so that whether you are in a relationship, dating a girl or you are single, you will be 100% sure that someone is interested in you.

When they compliment you

Did you know that seduction starts with a lovely compliment?

You might confuse a compliment with flirting. Flirting and seduction are very different, flirting is more playful as opposed to direct sexual seduction.

Another sign is that they over compliment you or compliment bomb you. The compliments come in thick and fast.

This is a sign that they are desperate to seduce you which might put you off taking it any further.

When they call and message you a lot

Whenever you look down at your phone there is a call or message waiting for you from the person you think might be seducing you.

The seducers do this because they want you to always be thinking about them. A great way to ensure this is to always be in contact with you.

At the beginning you might believe they are just being friendly, but after a week or so, it should become clear that they are wanting something more from you.

If you are in a relationship and don’t wish to be seduced, this is the time to put your foot down and put a stop to what is happening.

Things jump from casual to sexy. Suddenly everything that comes out of their mouth has a sexual air to it and leaves you thinking, what do they really want?

You might find yourself talking sexy back and that’s how they know that their seduction is working.

The way they look at you

You can tell a lot from the way someone looks at you.

When it comes to seduction, eye contact is king. It can say so much without having to say anything at all.

One look that allows you to quickly decide whether they are seducing you or not is when they undress you with their eyes. It’s like they can see through all your clothes, and they are taking them off piece by piece.

They might also stare deeply into your eyes which can make you feel like you are the only people left in the room.

The way they talk to you

They are open and honest about how they feel about you. When they are talking to you, they tell you that they would like to seduce you or undress you. They talk as if you are already theirs.

This is all part of their seduction tactics. They want you to believe that it is already a done deal, and you should give in.

You will also notice that any interaction with them is fun, exciting, and full of high energy. They are on their best behavior to make sure every move will entice you into seduction.

Expect her to suggest you should do something adventurous together and watch how she describes something that is usually considered boring.

Instead of her saying ‘I didn’t do much at the weekend, just lots of clothes washing, she will turn that into; well, I did some adult chores, pegged out the washing to dry and then rewarded myself with alcohol in the sun. She brings positivity to even the most mundane tasks.

When they start touching you

You might have already guessed it, but touching is a huge part of seduction. You can seduce someone without touch but it’s not as easy.

The person might start to stroke your shoulder, play with your fingers, or run their hand down your back. The touching will be sensual, and it might linger.

This is the type of touching someone will do when they are trying to seduce you instead of trying to simply flirt with you.

They leave you in a state of suspense

They don’t give everything away. To have you wanting more they leave you guessing,

Often, they will finish a conversation by telling you they have something they would like to tell you next time they see you. This keeps you guessing until you get to see each other again.

Something else they might do is touch you and then pull away, leaving you wanting more. They are wanting to leave you in a sense of suspense and wanting more.

When they press their body against yours as they walk

They want to be as close as possible to you even when you are walking down the street with them. If they move in close and you find yourself shoulder to shoulder with them, it is a sign.

The closer you are to someone, the bigger and better connection you can make with them which is why they like to be shoulder to shoulder with you.

They are different around you

You might previously have seen them with their friends, or maybe you were friends before which makes it easy for you to tell when they are acting differently around you.

One moment they are laughing and chatting away, the next they have you backed into a dark corner making strong eye contact.

Their whole-body language changes as does the way they speak to you. This is when it might become obvious that they are trying to seduce you.

They give you special treatment

They buy you coffee, take you out for dinner or stand up for you in front of other people. You notice that they don’t do this for anyone else and you start to wonder why they are doing it.

They are giving you special treatment because they are trying to seduce you.

After all, you wouldn’t be seduced by someone who treated you poorly would you.

How they position their body in front of you

She won’t just lump themselves in front of you. They will sit up straight and put their chest out. They might flick their hair over their shoulders to expose their neck and when they are talking twist their hips.

These are all signals they are giving off to try and attract you to them. It often works, and you find yourself becoming attracted and seduced by them.

They notice when you change something

Even the smallest change you make, they notice.

They might mention that your hair looks great when all you have done is change your shampoo. Ask if you have shaved or if you are wearing a new aftershave.

These are changes that someone only notices when they really care about you.

They are almost studying you and trying to get to know you really well. The more they know about you, the easier it is to seduce you.

Are they dressing in a sexy way? Showing off more skin? Highlighting the best parts of their body?

They want you to notice the good parts of them in the hope that you find them as attractive as they find you.

If they are trying to seduce you, their clothes will get tighter and shorter.

They might also wear the color red which has been shown to attract people more than any other colour.

This is the final step of seduction.

Everything they have done has led to this and they hope they can get you into bed. The goal of seduction after all is to become sexually involved with the other person.

Either way they want to take things up a notch. It’s time to ask yourself, am I ready to give in to seduction?