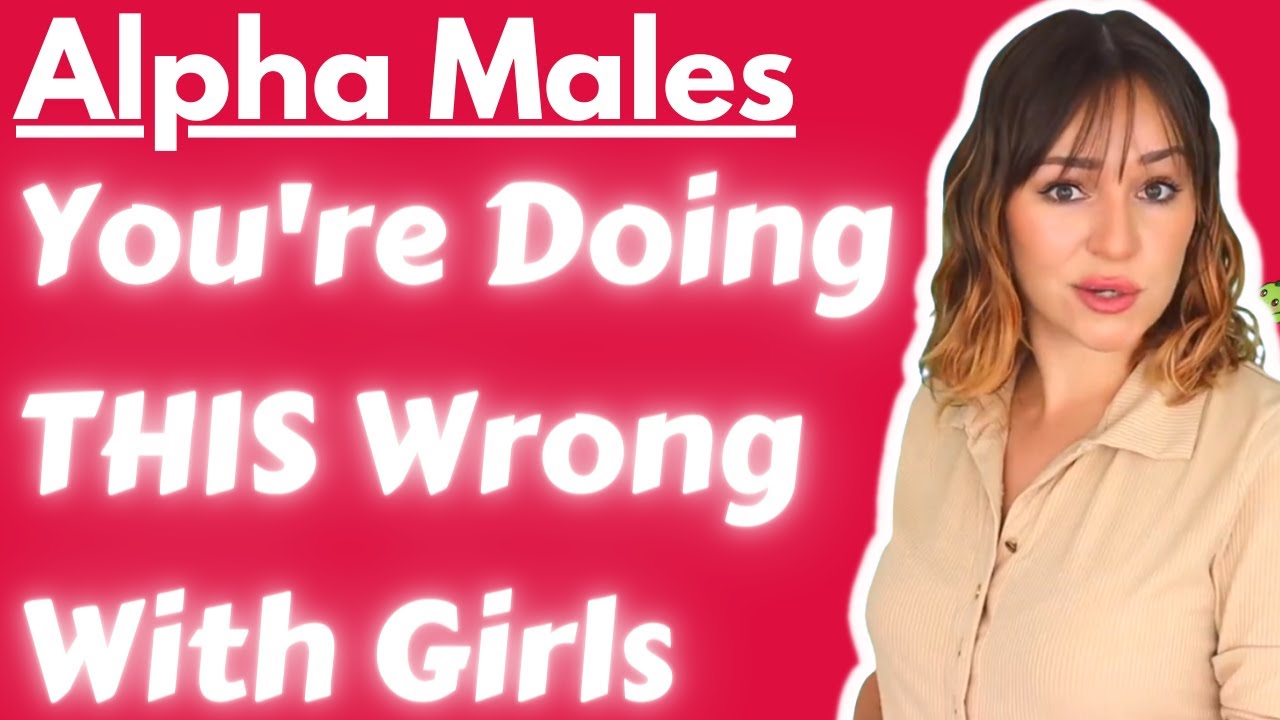 Alpha males! Even though Alpha men have many attractive traits that girls fall for they’re known to not make the best boyfriend material. What is it about the way alpha males act that puts women off of them? Could it be the confidence?

The way they flirt with girls. Their seduction techniques? Or is it something deeper about this personality type that just doesn’t work when it comes to settling down into a loving relationship? Let’s explore!

Alpha males have lots of great traits that girls really do go crazy for. Their personality types don’t actually suit everyone though and like everything in life there are many downsides to the alpha male type too.

Some ladies find that they are not the best boyfriends and although they might date them, they don’t take it any further because some of the traits can annoy them. So, you guessed it gents, today’s video I’m going to tell you why alpha males do not make the best boyfriends.

And when you are watching today make sure to keep in mind that alpha males have many positive personality traits as well. So, you can adopt these but leave the ones behind that we are discussing today. Because you might find that if you let go of the ones that aren’t too great with the ladies you have a winning combination.

The ball always remains in the alpha male’s court

Alpha males are natural leaders and like to take charge of situations. This can be highly attractive when it comes to dating an alpha male as they are powerful.

When it comes to being in a relationship with them though, the ball is always in their court which does not make them the best boyfriend.

Girls like to have some of the power in a relationship but being with an alpha male can make them feel self-conscious and it can lower their confidence.

This is because no matter what a girl does or say’s, an alpha males’ personality will naturally take over.

They will never do something they don’t want to do

Alpha males are known as being stubborn. They have a clear plan of what they want their life to look like and they will do anything they have to so that it works out.

You’ll never find an alpha male doing something he does not want to do which is difficult in a relationship. A relationship is all about compromise.

You give some and you take some, it’s a balance. Which is why girls find it really unfair when they have to do everything the alpha male wants but he won’t do anything that she wants to do.

This could even be something as simple as a date. Maybe she wants to go to the beach, but he hates the beach and instead says they should do something else.

Although a girl will happily change plans at the beginning of a relationship, she won’t always be so understanding.

It is true that alpha males are normally deeply knowledgeable but again they are stubborn which means it’s hard for them to admit when they are wrong.

It takes a lot to convince an alpha male that they are wrong which can be tiring after a while. Girls lose interest in men that are like this. They want a man who can admit that he is wrong when he is.

Alpha males can be controlling

When they expect things to be done the right way which is their way then it can develop into controlling behavior.

Alpha men can often be controlling without even realizing what they are doing. Girls really dislike this type of behavior and it’s a huge turnoff. They don’t want boyfriends like this.

They don’t handle their emotions well

Alpha males are surprisingly good at being empathetic and caring towards other people.

They are not good at handling their own emotions though which can make them difficult boyfriends.

They tend not to deal with things until everything becomes too much and they boil over. This can lead to them having a temper or just being very shut off.

To a girlfriend this can feel like they never really know them and like they are always hiding a part of themselves.

Alpha males are very used to being praised for things they have done.

People often treat them as though they are heroes which is why it’s difficult for them to hear feedback. Even if it is constructive and not negative, they find it hard to swallow.

They will never treat the person who has given it to them the same way again. Which can be hard to deal with.

Alpha males like to be the centre of attention

Alpha males absolutely love to be the centre of attention in any situation.

They love all the eyes in a room to be on them.

Although some girls, especially introverted girls, don’t mind this. Most find it really annoying and ask the alpha male to ‘tone’ himself down which goes against his personality.

In the animal kingdom, alpha males have the highest chance to survive, and girls have one of the lowest chances. In the human world of course it’s not quite a race for survival.

Alpha males however are still at the top of the food chain, un-touchable. Which can make it really difficult when you are in a relationship with them, girls often never feel good enough for them.

They often have people telling them how lucky they are to be with them and after a while this makes them feel insecure.

This can lead to a girl leaving an alpha-male because she does not feel like she deserves him.

As an alpha-male boyfriend it’s important to tell your girlfriend often how great she is and that she is always good enough.

Alpha males will put their social life ahead of girl

Alpha males are extremely social and have an impressive number of friends.

They are often out most nights especially at weekends. Although at the beginning a girlfriend often finds it fun to go out this much after a while she wants to settle down.

The alpha male will always put his social life ahead of his girlfriend because it is what gives him a lot of energy.

He will often text his girlfriend after work to let her know that he will be late home. After a while, most girls can’t handle this and leave the alpha male.

They might think that he is cheating on them or just be sick of not spending time with him. Either way girls can get sick of this type of behavior quickly.

It is clear that alpha males have very strong personalities. They make great leaders, are very popular and are extremely confident.

Although we are often told that opposites attract when it comes to alpha males and a strong woman, they unfortunately do not. Alpha males have to be the strong one in a relationship.

They want a lady who is more shy and a little introverted so they can take the lead. If they are in a relationship with a strong woman it often becomes explosive and full of arguments.

It’s better for an alpha male to avoid entering a relationship with a strong woman and pick someone who is a lot more introverted than they are.

This one could be both positive and negative. Girls love nothing more than a guy who is protective of them, in fact it mirrors their relationship with their father. This is something that normally attracts a girl to an alpha male.

When they become girlfriend and boyfriend though this can get a bit too much. It can become suffocating, and a girl can feel trapped. She might then try to leave the relationship or talk to the alpha male about this behavior.

This can get him to change his ways and realize his behavior has not been healthy but sometimes it just makes him defensive.

He sees it as his duty to protect his girlfriend but if you are an alpha male try and tone this right back so that you can enjoy a healthy relationship.