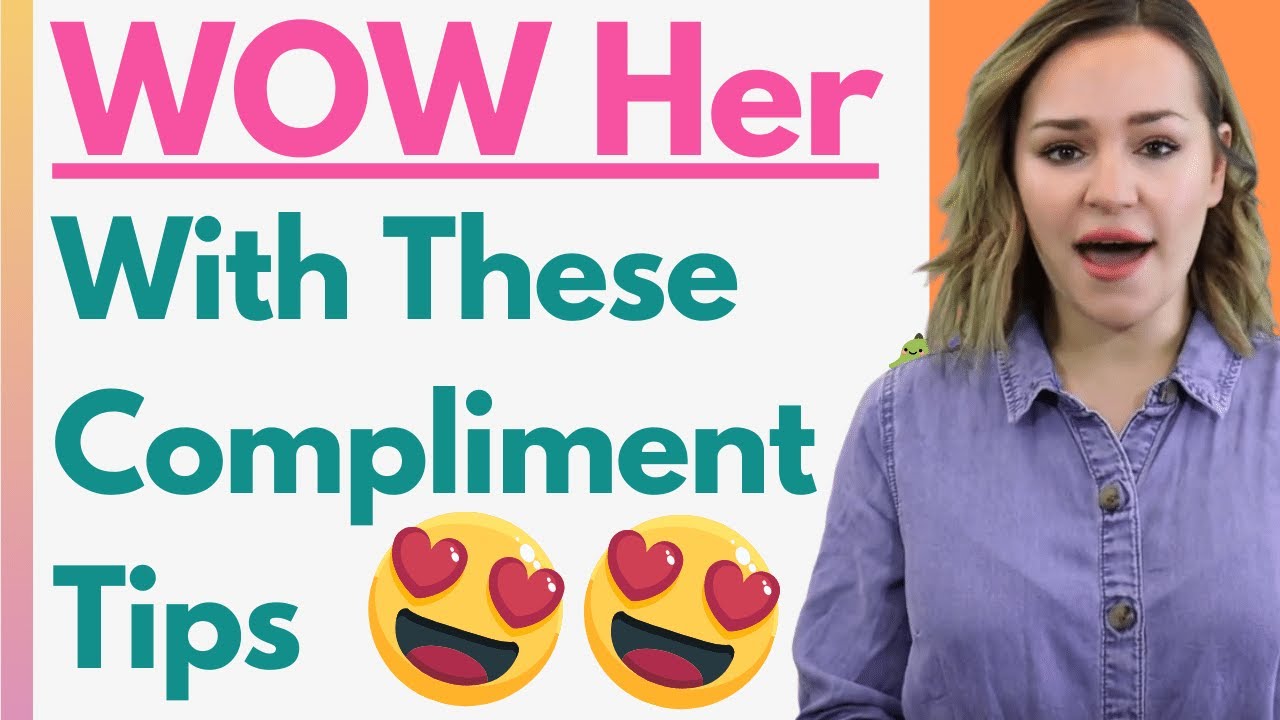 These are some of the top tips and best compliments you can give a girl that you like. Be it complimenting over text or complimenting her in person, it’s important to have a plan and know what not to do! By the end of today’s video you’ll have an understanding of how to avoid being creepy when complimenting a woman.

How To Compliment A Girl Without Being Creepy

Compliments are a hugely positive thing to give to a lady. Guys can get nervous though and worried that you are going to say the wrong thing. You might think to yourself “will that come off a creepy?”.

Well yes, it might and that’s why it is important to learn the difference between a creepy compliment and a compliment that will make her blush.

I can’t express enough guys how important this is when it comes to dating. If you come across as creepy, you don’t stand a chance and she will walk away. So it’s important that you watch today’s video fully. Today we are going to learn 7 ways to compliment a girl without being creepy.

In a world where dating often means creepy, cheesy chat-up lines and compliments, it’s time for you to stand out from the crowd and create a lasting impression. Let’s get started…

What not to open with

Let’s start with what not to compliment a girl…don’t start a conversation with ‘you’re so pretty. Not only is it super generic and something every guy says, but it’s also off-putting. You don’t know the girl’s name, she doesn’t know yours, you don’t know anything about each other and the first thing you have chosen to compliment her on, are her looks. It will make you appear shallow.

You should start by getting to know her a little and asking her name. As you get to know each other you can start dropping in compliments and yes you can say, you are pretty.

Being unique and standing out from the crowd is a great way to impress a girl. It’s even better when your compliments are unique and make her smile. Don’t go for the generic compliments when you first meet. Try and think outside the box.

You could compliment her on something she specifically mentions. For example, she might mention something great she did at work. Later on in the conversation, you could bring it up as a compliment. You could say, “hey I think it’s really cool that you achieve that amazing thing at work, it’s super inspiring”. She will be flattered that you took what she said on board and really impressed by you.

A unique compliment could also be about something she is wearing like a colourful dress or amazing shoes. Try and make it as specific as possible to her.

Keeping the compliments unique, speaking from the heart and being honest are some of the best ways to compliment the girl without being creepy.

I can almost hear you saying “Anna, why wouldn’t I be sincere”. Well, I trust you lot but I still have to mention this one. It’s important that any compliments you hand out are sincere and honest.

There’s no point saying something if you don’t really mean it. Don’t just say something to fill the gaps in a conversation or just to try and impress her because it will do the opposite. It will come across as creepy and forced, which will be a huge red flag for her.

If you really, truly like something about her then yes of course mention it and compliment her. Just make sure it’s something you really think.

When you only compliment someone on their physical appearance it’s creepy. Sure it’s nice to mention someone’s appearance especially when they do look nice but don’t take it too far.

Make sure you compliment them on their personality and achievements just as much as you do their appearance. It will show the girl that you are interested in her for more than just well…sex! This means that you need to get to know the girl and dig deeper than her physical appearance if you want to really stand out and not look creepy with your compliments.

Take note of your tone

Part of sounding creepy when delivering a compliment is your tone. If you does sound creepy when you are saying the compliment the other person will hear it as well.

When delivery a compliment maintain eye contact so that it looks sincere. When the words come out of your mouth make sure they are in the same tone that you would normally use. If you are in a very sexy environment then yes your tone may be lower. If you are just in a normal environment though like a pub or bar, give the compliment in your normal voice.

Why? Because giving the compliment in your usual tone makes it definitely sound true. This means you are not trying to be creepy, you are trying to show the person what you truly think of them.

If you were to suddenly make your voice high pitched or really low, it sounds like you are lying.

Which is not what you want guys. So to avoid being creepy, keep an eye on the tone of your voice.

Don’t focus on the outcome and don’t seek validation

Sometimes everything works out the way we want it to. You meet a girl, she is attracted to you, she loves your compliments and eventually you find yourself in a happy and healthy relationship. It’s the dream isn’t it guys.

Sometimes though, things don’t work out like this. It’s important not to focus on the outcome of your compliment. For example, don’t think because you have said her hair looks nice she is immediately going to jump into bed with you. Or that because you complimented her personality she will suddenly want to be your girlfriend. I mean she might don’t get me wrong but also, she might not.

That’s why it is important not to get attached to that ideal outcome you have in your mind. It can make you seem fake, creepy and at the end of the day, you will be disappointed. Instead, tell yourself what whatever will be, will be.

If it does not work out, you deserve much better! You deserve someone who will really cherish you and love you for you. So don’t dwell simply move on.

The next part to this is to not seek validation. We often seek validation in relationships and at work as well. We want something in return for what we have given. The same goes for compliments but I would really recommend that you don’t wait for validation. The girl may reply, oh how nice of you. Or, wow you are really thoughtful. She might also just smile you laugh.

Don’t set out to gain something from giving a compliment. Just say it because it is true, it will make you look sincere instead of creepy.

Don’t turn off your sexuality

It’s important to not turn off your sexuality. Often when we think of the word creepy with think of sex. It should not be this way though.

Now I am not going to tell you to give her sexual compliments or make sexual advances. This would be creepy! Especially if you have just met a girl for the first time.

What I am saying here is to embrace your sexuality and admit to yourself that you like her and are attracted to her.

If you were to switch off this part of yourself, any compliments would come across as stiff and calculated which would be creepy. So let yourself feels these feelings and acknowledge that you are attracted to her, guys it’s exciting! Use this to flirt with her. Once you know each other a little better you can make flirting compliments. After you have slept together, it is then ok to pay her some sexual compliments, just don’t do it before then.

Basically, guys, read the room here but don’t turn off your sexuality completely. It brings a level of spice to the situation without making it creepy.

So, guys, you might want to re-watch this video whenever you are going on a date with a new girl. It will help you stay on track and really impress her.