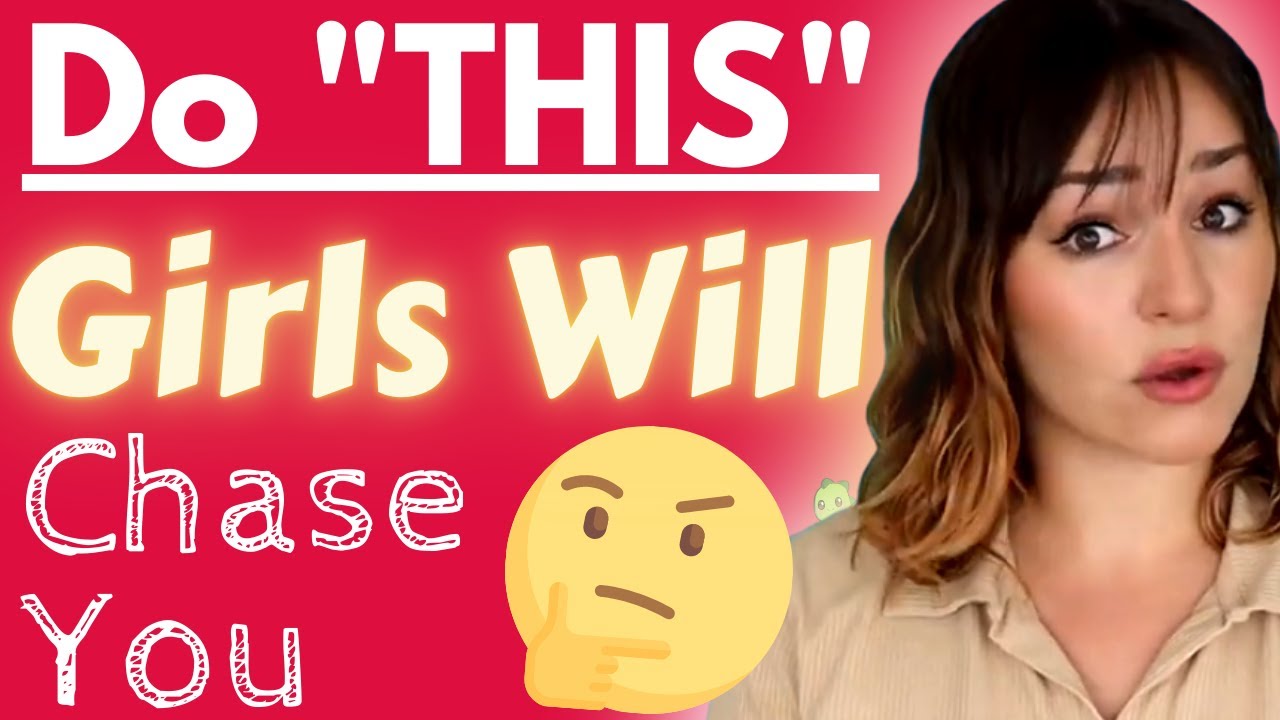 Learn how to get women to chase you! In today’s video we’re going to be discussing some dating tips that you can use to get a girl to chase you!

Wouldn’t it be great to have women chasing you for a change? I’m sure you’ve spent a large amount of your time chasing women.

Now men are often told that it’s the only way that they will end up dating a lot of women or getting a girlfriend.

The truth is this is not true at all. Both men and women can do the chasing.

Most women love the thrill of the chase which means that you don’t always have to do all of the work. In today’s video I’m going to tell you about what you can do so that you will have the women chasing you.

Do THIS and women will chase you

Don’t give up early

If you would like a woman to chase you then don’t give up too early.

Picture this, you are both on a date and it’s going well. She is laughing and smiling a lot at the things you are saying. You can tell that she is having a great time.

The problem is, at this point some guys start celebrating early. They might think, she’s happy, I can pull the brakes.

Then she stops being so interested and laughing because the behavior she liked is not being displayed anymore.

Don’t count your chickens before they hatch as they say. If you would like a woman to chase you, give her something to chase and impress her with your personality.

Try putting her in the friendzone

Ahhh the friendzone. It’s not a nice place to find yourself but it can drive you forwards and get you to work a little harder for what you want.

Of course, you don’t want to find yourself in the friendzone, but you could put her in it.

Girls often don’t even realize how they feel about guys until they are just his friend. Then they will work extra hard to become more than that. It’s all about the chase.

They want you to change your mind and get you to view them as more than a friend.

It’s a challenge in their eyes, so try it out and see what happens.

Make friends with her social circle

You might have your eye on her, but to get to her, you can go through her social circle.

You might have slightly connected social circles already or maybe one of your friends knows one of her friends. Find a way in and then make friends with her friends.

It adds a whole new dimension to the interactions you will have together, and it gives her a chance to chase you.

If you need to leave, leave

You need to remember that she is not your girlfriend yet. You are not even dating.

It sounds a little harsh, but the more you show her that you are independent and have your own life, the more attractive she will find you.

Believe me when I say that girls love nothing more than an independent man.

Don’t let her distract you from your goals

I am sure you have goals that you are working towards.

Maybe you want to lift a certain weight at the gym or get a promotion at work. Goals are important because they help you move forward but also show girls that you are driven and motivated.

Girls don’t want to chase a guy that has no ambition. They want to chase someone who is out in the world doing anything to achieve his goals.

It shows them that if they were to eventually be your girlfriend, they would be able to help you achieve your goals. Girls are very maternal and like to know that they would be a useful addition to your life.

Listen to her and allow her to be vulnerable

Once we truly open up to someone, they become an extremely important part of our lives. We can’t just open up to strangers on the street. It’s not who we are as humans.

We have to get close to someone, get to know them and be able to trust them with what we are going to tell them.

If a girl finds a guy that listens to what she has to say when she is being vulnerable and gives her some advice, she will be hooked.

Not many guys do this as they hold back their emotions. If you can do this for a girl, you will have her chasing you.

When you spend time with her, focus on her

So, when you are with her on a date or even in a social situation with her friends around you need to make sure that you always focus on her. Look her in the eyes when she is speaking to you and don’t let your eyes drift around the room.

Reply to what she has to say thoughtfully. She might not be used to a man really focusing on her when they are together.

This will make her think about how special you are and that you are someone worth chasing.

You can disagree with her opinions

Newsflash, you don’t have to agree with everything she has to say.

Sure, you want her to like you enough to chase you, but you don’t want to look weak. Girls do not find weak guys attractive at all.

She wants to date someone who has their own thoughts and feelings which means she does not expect you to agree with everything she has to say. You don’t need to be rude when you are disagreeing but be honest and open about what you think.

If she is open minded she will think about both sides and probably really value your opinion.

Be mysterious and keep her guessing

If she knows everything about you straight away she isn’t going to keep coming back for more is she.

Leave some things up to her imagination by being mysterious and keeping her guessing.

Girls instantly want to learn more about a guy when he is mysterious. All you need to do is keep some things private.

Girls also find guys that speak in a lower, slower voice more mysterious than those who speak in a louder, faster voice. So, try that and see how it goes.

Showing a girl that you are confident makes her think from the very beginning that she is going to have to put some work in.

If when she first met you, you were shyer, then she might expect you to be chasing to win her over.

If you are confident then she will be more attracted to you and therefore will more likely be the one to do the chasing.

A bit of psychology comes into this, but basically, if we don’t believe that we are good enough for someone, we are more likely to chase them.

Let her be the clingy one

You want to be chased by her which means you can’t be the one who is always desperate to chase her. It has to be the other way around!

Make sure that you don’t become the clingy one by filling up your life with other things like seeing friends.

Be available when she wants to see you or speak to you but don’t go out of your way to be free all the time. Let her cling on to you.

Don’t say nothing, but just be selective about what you say and when you say it.

Let her lead the first date

She has fought hard for the chance to date you so let her be the one to take the lead on the first date.

She might want to lead the conversation at first and then you can take over.

Obviously thank her on the date for organizing everything.

After the first date, let her continue to chase you and put in some work but you also need to step up and show her that you are interested in her.