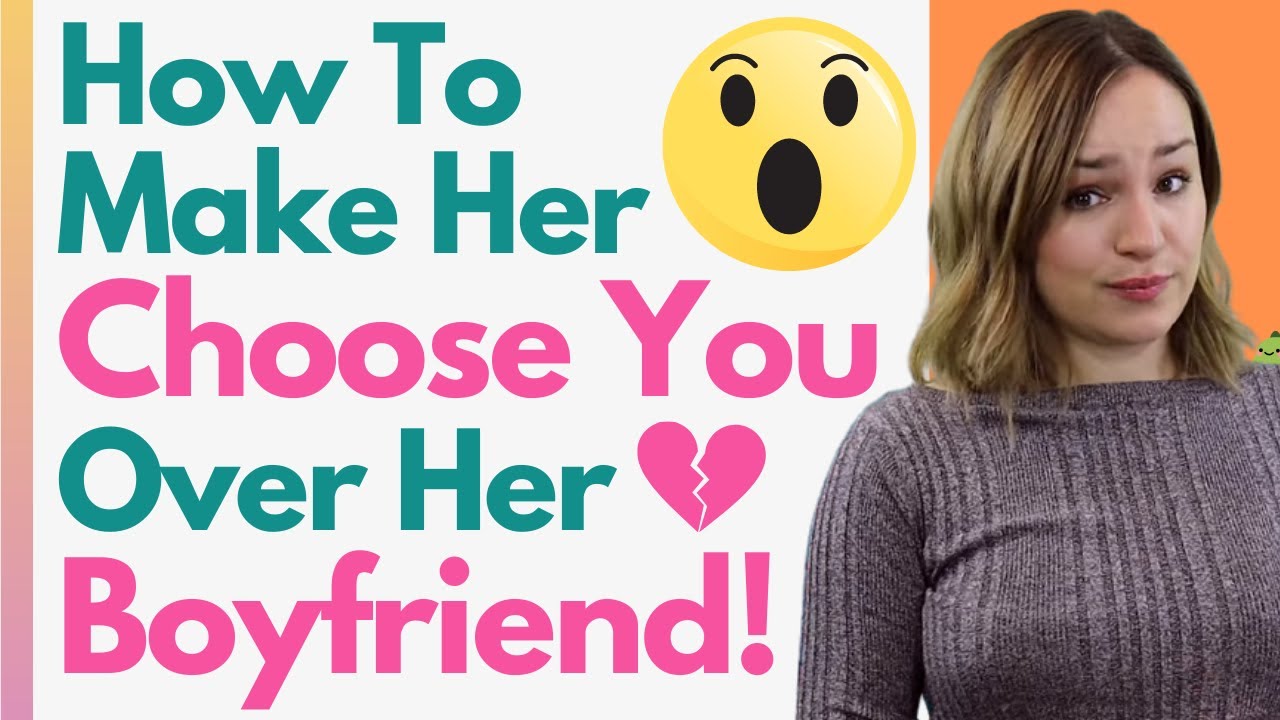 Today we’re going to be discussing how to go about attracting a girl who is already in a relationship, she has a boyfriend already so what should you do if you still really like her?

We understand this can be a touchy subject so we’ve tried to approach the whole thing in a sensible, mature and respectable manner.

How Do You Get A Girl With A Boyfriend?

There is nothing more confusing and frustrating than falling for a girl that already has a boyfriend. You have two simple options, number one move on and find someone else who is single. Or number two, start the chase and hope that she falls for you.

Now let’s talk about the elephant in the room, you should only opt for chasing if she is emotionally available to you now. You really need to ask yourself why do you want to be with someone that already has a boyfriend? But regardless of that, let’s talk about what you need to do if you want to grab a girl who already has a boyfriend. My name is Anna and stay tuned for the video.

Get the low down on her boyfriend

Very first thing to do – get the low down on her boyfriend. Find out where you are at with her. Now do not bad mouth her boyfriend as it could backfire and you may end up losing interest, well she loses it and you should we say.

Instead you want to build her trust and get her to confess and share how she really feels about him. Now you can agree about his flaws and bad habits if she brings them up and then use them to your advantage, which we will talk about further along in the video.

Give her space to grieve the breakup

It doesn’t matter if she tells you that she was unhappy, she already emotionally left the relationship and that she is ready to date you. When she breaks up she needs the space, she could be using you as a rebound or a crutch to avoid the pain of healing without even realizing that herself.

You need to make sure that she still wants to be with you a couple weeks later after the breakup has happened. Now she is going to be emotionally all over the place and you don’t want to rush into something that isn’t a long-term thing right?

Make sure that you are the only choice that she has

If she was romantically involved with you while she was currently dating her boyfriend, well let’s be honest, it would make you wonder if she’s going to do the exact same to you If you guys got together.

Now the best thing to do here is to start the chase and to make sure that she is emotionally invested into you. Now don’t worry we have a video dedicated to the psychology of the chase and how to actually begin the process and why women love it. So go watch that next!

But apart from the chase, you want to make sure that you and her will actually be an item. So you need to discuss with her the expectations, the wants and needs of both of you, to make sure you really are both on the same page.

Let her know how you feel

But what if you like a girl that you had some flirty banter with, you may think that she’s interested in you but are you really that sure? Probably not. For starters if she has been flirting with you there’s a good chance that she does like you.

But you need to make it known, it could be that does she like you and she’s sticking out the old relationship waiting for something better to come along then jump into relationship with you?

You need to let her know how you feel, ramp up the flirting as a subtle indicator of your feelings and see how she responds back. If she doesn’t ghost you and she does flirt back then you can tell her how you feel. And maybe you getting it off your chest will make the situation work out in your favor.

It’s actually going to set the tone for the next steps, so she knows how to act. Because you need to see how she will respond. She will respect your forwardness as it shows that you are serious about your feelings and you want things to work.

It could be she takes you up on the offer and breaks up with a boyfriend and dates you. Or she turns you down. A lot of guys seem to think that women actually like them when they’re already in a relationship when it turns out they were just being flirted with.

So you need to make your feelings very known. Make sure it’s as simple as “I like you” type of sentence so she knows what you feel.

Be what she wants and also what she needs

You need to adopt the traits and the things that she is missing out on and craving to see you as a good match so that she can be with you instead. And if you aren’t too sure exactly what she is missing from her boyfriend, just playing the gentleman lead will never not work out.

So be humble and kind, treat her well and show her that you are there for her. But most importantly be the emotional support be a shoulder to cry on and give her a solid reason to actually leave her boyfriend for.

If she can see that you are the better option to date she is more than likely happy to leave her boyfriend for you.

Do not get physical until she leaves the relationship

Please do not get physical until she leaves the relationship. Now I get it, you have these deep feelings for her. You may be fantasizing about embracing with her passionately, but, you have to hold back.

You need her to leave that relationship before you ask for something more physical. Because one, this shows that you respect her and that you are a gentleman and won’t rush into anything which then it won’t backfire later down the line.

And two, it tells her that you are serious about her and you are willing to wait until she’s out of the relationship before you take things to the next level. And this pushes her along to begin the breakup process.

If she doesn’t receive anything physical from you she could lose interest quickly which then you know she only ever wanted a physical relationship from you and not emotional. But it also shows that you are not a player. It means you are there with her, you want her for the long haul and she’s going to respect and like you more.

You need to focus on getting her attention and keeping it. And one of the easiest ways to do so is just to be in regular contact with her. Even if you aren’t too sure of her feelings, you still need to be keeping in touch.

Ask her to go out and do some fun things together. Even if it’s in a group situation and you can tag her in funny things on social media as well.

Most importantly you have to build her trust. A woman, this applies to every woman. They want to date someone that they can connect with emotionally. So you need to show her your vulnerable side. Open up to her and share some deep thoughts that not many people know.

It could be something from your childhood, it could be that you are secretly pursuing a hustle under the scene, so that no one knows you’re going for a different career path. Something that she will know is personal and she knows not many people know.

Because this is the invitation for her to do the same for you and if she trusts you she’s more likely to want to date you and break up with her boyfriend for.

Surprise her with her love language

We recommend the Five Love Languages by Gary Chapman and the link to buy the book or the audio is in the description bar below.

Now it could be that her boyfriend doesn’t know the acts of service is her language. So you can beat him to it and show her these acts of service, which is something that helps her out and makes her life easier.

So you could offer to fix something for her that her boyfriend isn’t. Organise her desk at work for her, help her revise for an exam, clean her car, make her a surprise cup of coffee at work. These will all work in your favor.

Give her some genuine compliments! You need to make her feel special. Because this will constantly keep her thinking about you, which means she’s gonna fall for you even harder and even quicker.

So instead of just giving her compliments about how she looks, pick out something more meaningful about what she has invested her time into.

This shows that you appreciate her hard work and you actually do notice the finer details for something she has worked towards. And I promise you this will definitely give you some good points.

We touched on this just briefly but it needs a whole tip on its own because when you have built her trust and she feels comfortable with you you need to let her come to you for the emotional support.

Now this gives you the upper hand over her boyfriend and lets her feel safe so that she wants to date you instead.

So you need to be attentive to her emotions and give her all the time that she needs to talk to you and when she does, listen and be genuine. Show an interest in her problems, don’t interrupt her, and also remember things from past conversations and bring them up into future conversations.

Now the attention to detail by remembering conversation snippets makes her feel special and it lets her want to emotionally open up to you. And if you can get her to feel emotionally connected to you she will realize there’s actually no benefit to stay with her boyfriend if she’s getting boyfriend vibes from you.

Let her make the first move

You guys can flirt and you can spend lots of time with each other. But out of respect, make sure that she is the one to make the first move when she’s ready. Let her chase you and keep up the interest between you both